Exactly How Many Hours Are Teens on Their Screens?

Exactly how many hours do you think teenagers actually spend on their screens each day?

What about tweens? That’s right…8-year-olds…10-year-olds…how much time are they soaking in YouTube, Fortnite, Snapchat, Netflix and every other enticing entertainment media activity on their devices each day?

The number are in (in fact, you can take Jonathan’s 8-question quiz right now to see how well you know your kids’ media habits), and you might be surprised to find that media consumption is now a full time job.

Full Time Screen Time
As an adult, you work approximately 8 hours per day. Throw in the commute both ways and you’re likely investing a total of ten hours of your day to a job. Today’s teens have a similar commitment:

Each day, they consume 9 hours and 49 minutes of media through various outlets.

But they do this seven days a week.

Back in 2015, Common Sense Media released a jaw-dropping report that claimed teenagers spent 8 hours and 56 minutes of every day consuming entertainment media of some sort (TV, social media, video games, online videos, etc). Since then, the civilized world has been eagerly waiting for the study’s sequel to see if there have been any shifts in young people’s media practices.

The new study, which represents data from more than 1,600 tweens (ages 8-12) and teens (ages 13-18) from across the nation, was finally released in late October. You can read their full report if you have the time, or you can peruse the study’s key findings to get “a big-picture look at the patterns of media usage among young people in the U.S.” I’ve waded through the data, and I’d like to streamline the information even further into what I see as the four most important trends….and then offer a few tips to help families manage their media uptake.

Let’s look at a few of these 2019 entertainment media trends:

Trend #1: The amount of media consumed by kids has continued to rise over the past four years.
This shouldn’t surprise anyone. YouTube consumes the attention of young people of all ages. Social media and video games keep them glued to handheld screens. Netflix, Amazon, Hulu, and others offer round-the-clock access to thousands of hours of television content. The list goes on and on. Teens crave media in lots of different forms – including print – and their insatiable desire is revealed in how much time they spend consuming it each day. Tweens (8-12) average a total of 5 hours and 54 minutes every day which is almost exactly what they were doing four years ago. But teens (13-18) now consume 9 hours and 49 minutes of media every day – almost a full hour more than they did in 2015! Bottom line: young people are soaking in an increasing amount of entertainment media each calendar year, and the older a kid gets, the more media he/she uses.

Trend #2: Online video is quickly becoming king.
From 2015 to 2019, the number of kids who watched online videos every day more than doubled…and the amount of time they spent watching them also doubled! In 2015, 24% of tweens watched videos; today, 56% of the same age group does. In 2015, this younger group watched about 25 minutes of online video; today, it’s 56 minutes. For older teens, going back to 2015 found 34% of them watching videos each day; now, 69% of them do it. Four years ago, teens watched 35 minutes of online videos each day; now, it’s 59 minutes. Obviously, YouTube’s content, creators, and user-friendly search features is driving this increase. In fact, tweens say watching online videos is their favorite media activity and YouTube is “the site they watch the most.” Older teens still prefer listening to music over all else, but watching videos lands soundly in second place.

Trend #3: Smartphones are like hormones; most teens have them. 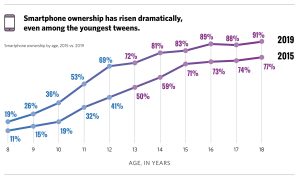 53% of 11-year-olds now own a smartphone. One year later, ownership jumps all the way to 69%! By the time a kid reaches his or her senior year of high school, 91% of their friends will own a smartphone. The graphic at the right shows two important differences between 2015 and 2019. First, every single age bracket begins at a higher level of smartphone ownership than it did four years prior. Second, the growth in smartphone ownership is constantly increasing by age. Now that millions and millions of young people carry a smartphone with them every day, it means our culture’s images, lyrics, messages, and beliefs are being streamed into their back pockets – and minds.

Trend #4: Parents aren’t really that concerned with screen use.
A mere 15% of tweens and just 12% of teens say they use some sort of app or tool to track their personal screen time. That means millions of kids do nothing to monitor themselves. Even more interesting is the fact that just 28% of tweens and 14% of teens said their screen time was tracked by their parents. However, when the subject switches to “content,” parents lean forward a bit more. Roughly 50% of tweens’ parents and 26% of teens’ parents say mom and dad use an app or tool to track what their kid does on their devices. That’s much better, but it still means over half of kids have little to no sensible (bare-minimum) screen-limits.

Entertainment Media and Cheesecake
Look, entertainment media isn’t going away. Even if Snapchat, Netflix, Instagram, and the other giants of our day were to somehow crumble, they’ll be replaced by something else just like Facebook replaced MySpace.

That means we as parents must be proactive in how we help our kids navigate the various elements of today’s entertainment media.

Two weeks ago, my doctor had to have a similar conversation with me. In her polite voice, she warned me about the content of cheesecake, mostly sugar, and she also cautioned me about the frequency with which I eat cheesecake and similar sweets…mostly every day. I recommend a similar strategy when it comes to coaching our kids about media.

So what can Mom and Dad do? We need to help our kids learn discernment in the areas of quality and quantity.

1. Quality Control. No, not every single aspect of today’s entertainment media is toxic, but some of it certainly is. No, not every Snapchat is pornographic in nature, but the “adult industry” is always looking for ways to introduce its product into the visual diet of young people. Our kids may not be able to distinguish between the good and the bad as quickly or as accurately as we can, so we have to help them. Can we use apps to help? Absolutely! But we can only delegate so much responsibility to a tech-related tool. At some point, we have to take a personal role in the process, so don’t be afraid to step in. Remember, the goal is to help them monitor themselves, so always be working toward that end.

2. Quantity control. Let’s say your kid never looks at porn, never sends a racy Snap, and never listens to a Cardi B song. Great! But they can still develop really unhealthy practices by spending hour after hour playing video games, watching YouTube videos, and scrolling through Instagram pics. Even if it’s “good” entertainment media, we still have to moderate how much of it they consume. Left unchecked, grades will suffer, obesity will continue to rise, and attention spans will continue to shrink. Of course, this is in addition to the growing belief that the more time a kid spends using social media, the greater their likelihood of facing mental health issues such as anxiety and depression. We have to help them understand when enough is enough.

The research says most parents aren’t taking a guiding role in their kids’ entertainment media consumption. We cannot afford to make that mistake. Do everything you can to help your kid develop healthy practices when it comes to media.

Are you engaging your kids in these conversations? 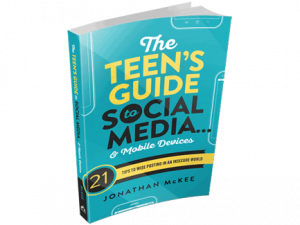 START THIS CONVERSATION WITH THE “DRIVERS ED MANUAL” OF SCREENS AND SOCIAL MEDIA,
THE TEEN’S GUIDE TO SOCIAL MEDIA & MOBILE DEVICES