Turning Your Overreaction into Interaction 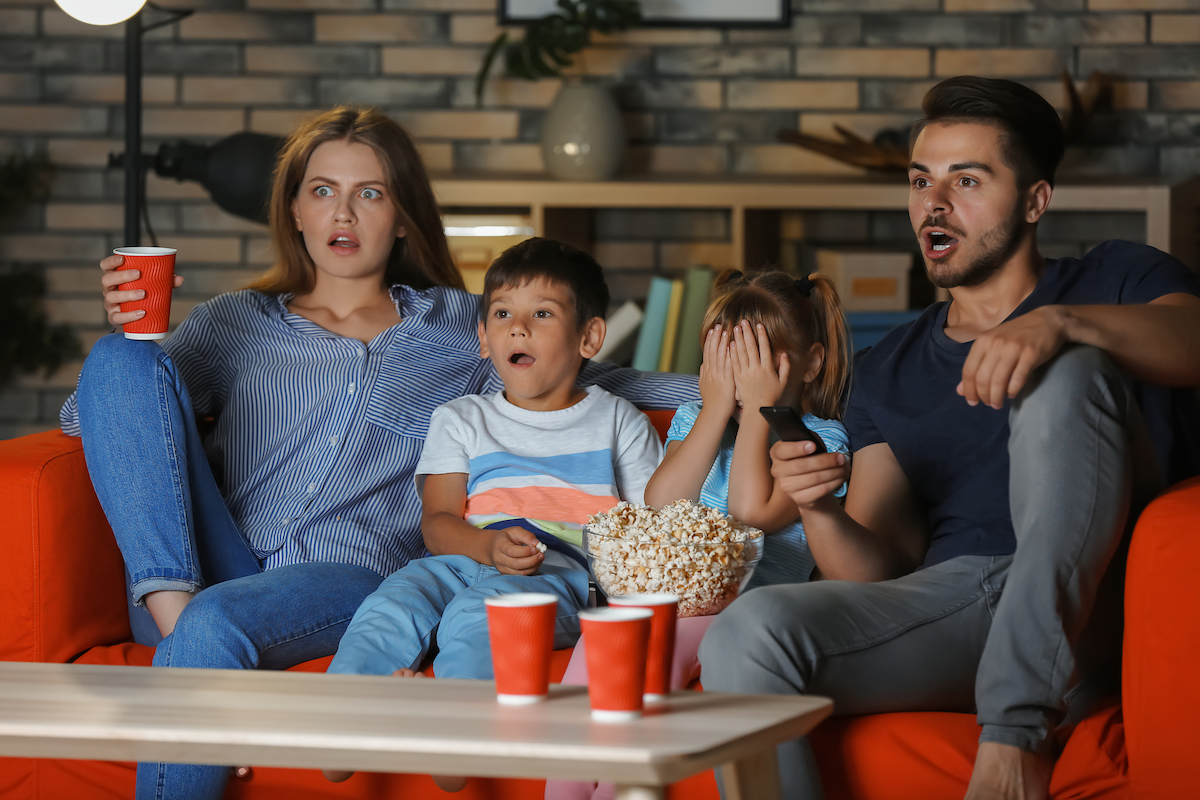 The whole family gathers around the big screen eating pizza and wings, eager for the second half of the Big Game to start. Then Shakira and JLo are introduced, and within seconds moms and dads around the country are forced to react.

A. Jump up, turn the TV off, and begin ranting about “the trash on TV today!”

B. Leave it on, but send the kids out of the room.

C. Don’t say a word and hope that your kids don’t notice (even though your 12-year-old son now has a strange grin on his face).

D. Point to the screen and say, “Son, that right there is how babies are made.”

E. None of the above.

Parenting has always been difficult, but controversial Super Bowl halftime shows like this past weekend made it even more so when parents were instantly put on the spot to react… or overreact…in the moment. And these moments are always difficult to navigate.

Honestly, what were we supposed to do?

If we turn the TV off, our kids might think of us as antiquated and ignorant with archaic values. Sure, we shouldn’t let that bother us…but it does. What if our values aren’t archaic? What if they’re just refreshingly unwavering? How can we help a wishy-washy generation being spoonfed, “Do what feels right at the moment” to understand?

If we leave the TV on and send the kids out of the room then we’re hypocrites… maybe even a pervert.

If we just sit there and hope our kids don’t notice, then we’re the proverbial ostrich with its head in the sand. And let’s be real. Our kids definitely noticed. (Which makes you wonder if JLo actually considered, “My daughter is going to see me doing this!”)

And it would be nice to try to turn moments like this into teaching moments…but what does that actually look like?

A Little Too Common
Sadly, this situation isn’t that rare. If you’ve got screens in your house (and most of us do), or your kids have screens in their pockets (and most of them do), then the struggle is real. The messages in today’s top music are frequently irresponsible. The apps they want are far from innocent. Many of us implement some reasonable rules and screen limits…but let’s be honest, we can’t block everything. Besides, we don’t want to be so focused on blocking the lies that we forget to talk about the truth!

So how should we respond in these moments?

Here’s four tips I teach in my parenting workshops:

1. Press Pause
No, not literally with your remote control (because you don’t want to freeze-frame on JLo’s booty). Pause your reaction. Do anything you can to delay your response.

This is tricky when considering the example of the Super Bowl Halftime show. If you delay reacting at all, then you’re automatically allowing your kids to see it. So in this situation, what if you stood up, turned off the TV and said, “Who wants some nachos?”

If your kids argue, “But Daaaaaaaaad, I wanted to see JLo pole dance!” then pause your reaction.

Do anything you can to buy yourself time.

Why? Most of us aren’t that good in the moment. I know I’m not. In fact, every time I did react…actually, overreact…I always looked back about an hour later and thought, “What I should have said was…”

So why not just give yourself that hour in the first place. And if your kids press you, then memorize a phrase like, “On the advice of my lawyer, I’m delaying my response so I don’t say anything stupid.” Or even, “I love you, and I respect you, so I’m going to pray before I respond because I don’t want to say anything insensitive.”

Pressing pause helps you to…

2. Prove You’re Approachable
Whenever I speak at a school assembly about sex & intimacy, kids always come up and ask me pretty explicit questions about sexual decisions they’re making. I think this happens for two reasons. One: I’m a stranger, which makes me safe. They don’t have to see me at church or school anytime soon. Two: I’ve proven myself approachable about this subject. I talk candidly with them on the subject without freaking out.

Here’s the interesting part. Whenever a kid asks me one of those typically-embarrassing questions like, “Can I get and STD if I just have oral sex?” I answer their question, and then I say, “Do you have anyone you can talk with about this?”

Then I always ask. “What about your parents? Could you talk with them about this?”

And 99% of the time they respond by literally laughing. “No way.” And then they say these words:

“They’d freak out if I asked them that?”

Think about that for a moment. Most of our kids won’t ask us a question because they’re pretty sure we’d freak out. And how we respond in these moments (even in these halftime show moments) definitely influences their perception.

So what if we didn’t freak out? What if we proved that we were “safe.” What if we turned off the TV, paused our response… and just smiled. Do you realize smiles are contagious?

Imagine turning off Shakira mid-hip-thrust, turning towards your kids, smiling, and then saying, “Whose hungry?”

“Sorry, I need a moment to think, because I don’t want to say anything hurtful. Who wants ice cream?”

Then have some fun with your kids. Focus on them. Do something they like while killing time. And after giving it some time…

3. Resist the Urge to Judge
At this point the temptation is to list out everything that is wrong with the entertainment media influence you just encountered, analyzing the lyrics, the inappropriate outfits, the obscene gestures… all valid points.

But one problem with this methodology: it puts parents in the position of lecturing.

What if we turned our lecturing into listening?

In a world so potent with explicit lies, what our kids really need to hear is the explicit truth. So what if we…

4. Point Them to Scripture
Which is better: parents listing out everything wrong with the entertainment media everyone just observed, or our kids reading what scripture says about it and applying that truth to real life?

Consider the Super Bowl halftime show analogy. Maybe you delay the conversation until after the game. And finally, while eating dinner together sometime that week, read some scriptures. Don’t introduce that you want to talk about the halftime show. Just say, “Hey, let’s read a little bit in our Bible together tonight.” And after the groans, just read.

27 “You have heard the commandment that says, ‘You must not commit adultery.’ 28 But I say, anyone who even looks at a woman with lust has already committed adultery with her in his heart. 29 So if your eye—even your good eye—causes you to lust, gouge it out and throw it away. It is better for you to lose one part of your body than for your whole body to be thrown into hell.  (Matthew 5:27-29, NLT)

18 Run from sexual sin! No other sin so clearly affects the body as this one does. For sexual immorality is a sin against your own body. 19 Don’t you realize that your body is the temple of the Holy Spirit, who lives in you and was given to you by God? You do not belong to yourself,20 for God bought you with a high price. So you must honor God with your body. (I Corinthians 6:18-20, NLT)

20 My son, obey your father’s commands,
and don’t neglect your mother’s instruction…
24 It will keep you from the immoral woman,
from the smooth tongue of a promiscuous woman.
25 Don’t lust for her beauty.
Don’t let her coy glances seduce you. (Proverbs 6:20, 24, 25, NLT)

Then resist the urge to lecture, instead, just ask these four questions about each of these passages:

These questions can be used with any scripture you read.

Or if you find that a deeper conversation is needed about the entertainment media young people are soaking in, then grab a devotional resource like The Teen’s Guide to Social Media & Mobile Devices, and turn straight to “Tip #14: Dissect Your Entertainment Media” or “Tip #4: The Whole Picture of Those Pictures” and go through those discussion questions with them. Or if you have a boy then maybe grab The Guy’s Guide to Four Battles Every Young Man Must Face, and engage them in conversation using the discussion questions in the section on “Screens” and the section on “Sexual Temptation.”

Being Calm in the Moment
Entertainment media can be distressing, and it’s not always easy being “safe” and “calm” in the moment. So buy yourself some time. Press pause—delaying your response. Prove you’re approachable—interacting with your kids calmly. Resist the urge to judge, instead turn your lecturing into listening—pointing them to scripture and asking questions. (Here is another example of what this might look like with music, or an artist they love).

What would it look like in your home if you turned your overreaction into interaction and helped your kids think Biblically about the media they’re soaking in.

Are you engaging your kids in these kinds of conversations?