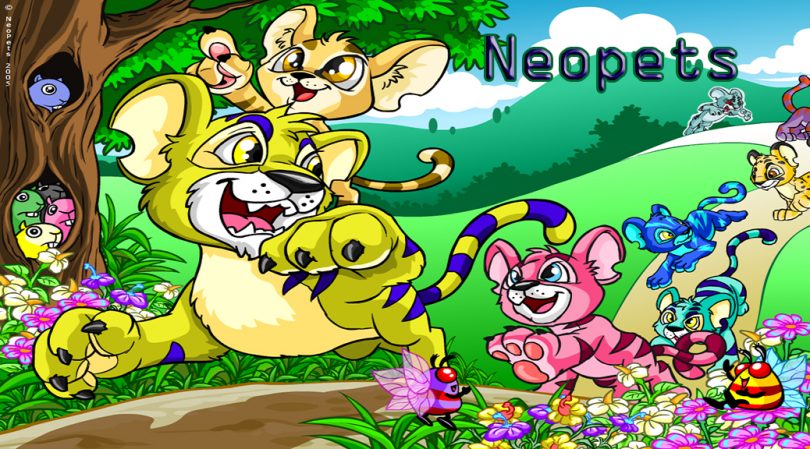 Game Description:
When I was a young kid, I played on a website called Neopets. It was a virtual pet website, where players take care of creatures in the world of “Neopia,” exploring different places and having new encounters with your pet. While there were games on consoles about this kind of thing, Neopets reached new ground by giving players this experience on home computers, and its popularity grew massively over the years.

Nowadays, the original developers of Neopets are no longer involved in the project, but the website is still going strong. Since I reviewed Flight Rising—a new take on internet pet simulators—I decided to check out the site that likely inspired and birthed it. So, let’s head over to Neopia, and see if Neopets is good for your kids.

Violence:
Cartoon violence, with all fun and no blood, is all around Neopets. There is a Colosseum where players can battle both computer players and other users, with a variety of weapons they’ve gathered from their travels. Some of the various games also include cartoon violence.

Language:
None. This is disallowed on the site.

Sexual Content:
None. This is disallowed on the site.

Spirituality:
Not really. Fairies and magical creatures do play a part in Neopet’s lore, including battles against light and dark magic forces.

Miscellaneous:
Like with Flight Rising, I was disappointed with the lack of options for disabled players, but happy that, since this is a browser game, there are ways to make the game assessable. In order to not repeat myself, I’ll link to my review here, where you can read more about this.

It’s been years since Neopets has been in the hands of people who truly care about it. The site was launched by independent developers, but since then it has been sold a few times to large companies. Now, it’s in the hands of Knowledge Adventure, the owners of Leapfrog, who seem content to just let the site stay the same as it was over a decade ago, and just bring in money.

And that money comes in mostly through advertisements. Many, many, many advertisements, that usually take up around 30-50% of the screen. Click on a new page, get ads. Want to play a game to earn neopoints (the site’s currency), they’ll play you an ad or two first. There’s even a game that gives you neopoints for watching ads.

On every single page webpage, at least three advertisements are prominently displayed. They flood the page and sometimes block features, making it hard to see things on Neopia. It seems clear where Knowledge Adventure’s priorities are here: not with updating the game for its player base, but with the money that will come in from those still devoted to Neopets, people who want to return to the site for nostalgia, and new players checking it out.

Also, there were many times where features of the site simply didn’t run. I would click a destination on the world map, and most of the time, it wouldn’t load, which meant I couldn’t go to the place I wanted to. This led to me being unable to interact with many elements of the website. And this included the tutorial presented to me upon logging in! As far as I can tell there’s not a technical issue on my end—I’m running Neopets on a modern computer with Adobe Flash enabled—which makes this all the more baffling.

Positive Elements:
Having and customizing your Neopet is a real blast. I love the variety of species on the site, and how much you can customize them further with backgrounds, clothes, etc. There’s also flash games to play and earn Neopoints—the amount of games is staggering, so it’s easy to find a favorite.

A Child’s Perspective:
Neopets is primarily aimed at young children, and to this day, the appeal to kids is still huge. The Neopets all have adorable designs, playing with them is a cute activity, and helping them get stronger by fighting or more intelligent by reading is rewarding.

The site also has an overwhelming amount of things to do—some children will love this, others may be frustrated. I’d suggest guiding them through creating an account and sitting in on their first session.

Reviewers Thoughts:
I had a fun time returning to Neopets. The virtual pets are as adorable as ever, and it’s a blast to interact with them and help them grow. And while the site is still mostly the same, there are a few things added on here and there (for example, a Neopets version of Tidying Up with Marie Kondo, which is just delightful), and the “Latest News” page does show that some people at Knowledge Adventure are working on the game.

But overall, Neopets just feels abandoned, stuck in the mid-2000s—when it shifted from being an independent labor of love, to being bought by large corporations who wanted to cash in on the IP. I was both happily surprised and deeply disappointed to find that most of the features I encountered as a young Neopets player are still there, unaltered and unchanged in any way.

Unlike Flight Rising, which is consistently being updated, Neopets feels frozen in time. The soul of what I loved is still there, but it’s hollow, surrounded by shameless advertising, wonky features, and lack of change.

I do still love the idea of virtual pets, and the educational value therein. I’d encourage you and your child to at least give it a try if it sounds like something they’d like. Take a trip to Neopia and see if it’s a place you’d like to stay.