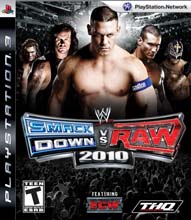 WWE releases its yearly Smackdown vs. Raw series with a few changes and the obligatory roster updates. The control scheme has not changed much, so it is very easy to pick up and play, whether you are a seasoned veteran of the squared circle or an up and coming rookie looking for your first win.

A couple of noticeable differences are the graphics and the load times. The wrestlers look even better in this version than in the past. Also, during the matches, much of what I call “screen litter” has been removed. There are not any health gauges or body damage gauges getting in the way of the action and the screen. The load times have dramatically decreased as well. In past games, there was a load screen for everything. They were long and frustrating. In this version, much of the game is downloaded to the hard drive and the load screens are much quicker.

What has changed the most is in the “Create” options. As with the previous SvR games, you do have the ability to create your own superstar, but with many more options to choose from. Once you have your superstar created, you can then create your own opening. You can even create a finishing move and dive attacks from the top rope. Since we all know that the drama on the WWE is scripted and if you are feeling the creative juices flowing even more, you can create your own story line; type up your own script, start your own feuds, start your own alliances and more. After you create your masterpiece of pro wrestling drama, you can then post it online for others to download and play.

Just to give you an idea of how in depth you can get with the various create features: When I got the game, I spent the first 3 – 4 hours creating my one and only superstar from the ground up. I created everything from his look to his opening and finishing maneuver. And that was only using the “Easy Create” options as opposed to the “Advanced Create” options.

As this is a wrestling game, there is going to be violence. There are punches, kicks, body slams, suplexes, etc. Here are a few of the violence highlights (or lowlights, I suppose):

As you wrestle in the match, there is some real time damage. Take on too many slams and your character’s chest and back start to redden.

There is some bad language used in the game. It is not often, but it is noticeable. Words like d— and hell are thrown around during the Story Mode. Also with the “create a story line” option, anything can be typed since you can create your own script of what each wrestler will say.

As in previous versions of the game, the roster includes the WWE Divas wearing little clothing in and out of the ring, showing lots of skin. You can also create your own WWE Diva in the “Create a Superstar” option. You can opt to either fully clothe your Diva or not. Also, the opening videos of the WWE Divas show real videos of them in tiny bikinis or lingerie.

There is nothing to mention in this category, although there are some Superstars that are a bit on the “darker” side, namely Undertaker and Kane.

SvR 2010 is a fun game. The sheer volume of creative options is just astounding. Game play is relatively the same as older versions, but the quicker load times make the game move faster. Also the graphics are quite impressive. If you have a child that is a wrestling fan, he/she will probably want to play this game. Parents, please keep in mind, however, the above mentioned violence and sexual content when deciding if this game is a good fit for your family or not.