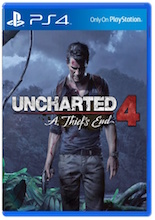 Appropriately titled, Uncharted 4: A Thief’s End is the end of the Uncharted series. Its creator, Naughty Dog, has made that very clear. The goal of this game is to provide complete, final closure to the characters and scenarios depicted in this influential series.

For those unfamiliar, Uncharted: Drake’s Fortune was an early release on the Playstation 3, and the first game to truly push the hardware to its limits. Its sequel, Among Thieves, was a landmark in cinematic action gaming, and is still heralded as one of the best and most influential games of the last generation. All in all, the series has been a resounding success, so wrapping it up is a pretty major event, especially after Naughty Dog’s previous release, The Last of Us, widely heralded as a landmark in video game storytelling and presentation.

The series is something of a more action-oriented Indiana Jones, starring Nathan Drake as he explores ancient ruins and discovers the lost treasures and deadly secrets of civilizations long gone. He’s faced the dangers of ancient traps, the plots of competing treasure hunters, and even the mythical threats of long-buried legends. But as of Uncharted 4, he’s not doing that any more. He’s settling down, with a wife, a house, and a normal 9-to-5 job. And he’s fine with that, or at least he really tries to be. But of course, an emergency situation comes up that forces him back into that life, and he has to head out for one last job.

But before I get into how well the game pulls all this off, let’s go over whether it’s appropriate for your kids.

Though this game actually features significantly less shooting sequences than previous games in the series, there is still plenty of violence. The game is played from a third-person perspective, and when enemies are in the area, the player usually has a variety of approaches to choose from. They can sneak around, and often get past entire areas of the game without killing anyone. They can also kill people silently so as not to be noticed (usually by suffocating people or breaking their necks). In more open conflict, the player will use a variety of weapons to dispatch thugs, guards, and soldiers. Bullets are met with small splashes of blood, and explosions can cause bodies to fly into the air, but there’s no graphic violence such as dismemberment.

If Drake falls to his death while climbing, his body will hit whatever is below it; this is seen from a distance and is not graphic.

Being an archeological adventure story, there are plenty of old corpses littering caves and ruins.

The S-word, along with relatively minor words such as “ass” and “damn,” are said throughout the game.

Nothing to speak of.

The series has always included natural (though still wildly fictitious) explanations for seemingly magical phenomena of ancient societies, but no actual magic is involved.

Some characters make poor decisions, but the story addresses this as any good story would.

The player participates in a heist.

In two sequences, your enemies are security guards. I tried not to harm them whenever possible, but it’s certainly possible to kill them all.

The Uncharted series features a lot of downtime, story-based sequences of exploration or cutscenes, and relatively laid-back traversal of tricky terrain. All of this is done very well, but some children get bored when the action hasn’t happened for a little while. You’ll know better than I whether your child will deal well with that or not.

Uncharted 4 is exactly what the end of a series should be. It not only improves on the base of its predecessors, but also learns from the wider criticisms that have come into perspective over time, and crafts a compelling story that transcends the excellent presentation and enjoyable characters of previous games.

After an exciting intro, the first hour or so of the game is a very real-feeling and deeply personal look into Drake’s normal life. It may be the new standard for representing the mundane in a video game, and it’s largely responsible for the fact that the game feels so genuine in its conflict between adventure and stability. The characters and their conflicts feel overwhelmingly real and relatable, making Uncharted 4 one of the better games to come around in a long time.

I should note that it also has a multiplayer mode, which is enjoyable, and has the same level of content I described for the single player mode. But ultimately it’s not the reason you should buy this game.

It’s certainly not for younger children, but your teenager who goes to PG-13 movies will do just fine, and it will be a far more enriching experience than the next Call of Duty game they’ll be begging you for.