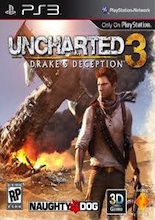 Uncharted 3 once again follows the adventures of Nathan Drake, this time as he and his friend and mentor Victor Sullivan (Sully) search for the lost city of Ubar, also known as the Atlantis of the Sands. I have always thought of the Uncharted games as more than just a video game, but also like a summer action movie in the spirit of films like Indiana Jones, The Mummy, and National Treasure. The exception being of course, that since this is a video game, the player is in control of the main star of the film (at least to a certain degree).

Just like the previous two Uncharted games, the game plays out from a third person perspective. Half of the game is comprised of platforming elements (figuring out how to get from point A to point B) and solving puzzles such as how to enter an old crypt. The other half of the game involves fighting bad guys with guns, grenades, and good old fashion hand-to-hand combat.

For those of you who have played the previous Uncharted games, you will be happy to see both Chloe Frazer and Elena Fisher make appearances in the game, but the main story tends to focus more on the relationship between Nathan and Sully. It’s very much modeled after classic buddy films such as Butch Cassidy and the Sundance Kid, Smokey and the Bandit, or any other classic film about two close friends on a bigger than life adventure.

In addition to the single player campaign, there is also multiplayer matches and co-op missions that players can play either online via the Playstation Network or at home with their friends via splitscreen.

Reviewer’s Note: The information provided in this review is based on the single player campaign and does not reflect content from the multiplayer mode or the co-op missions.

Again, the game is played from a third person point of view. There are various guns the player can use to shoot enemies with. When an enemy is shot, often times a small amount of blood is shown. When Nathan Drake is shot and he starts growing weaker, blood will appear around the edges of the screen. Also, there are some cut-scenes where people are shot and you can see bloodstained clothing.

Hand-to-hand combat is also one of the main ways to fight enemies. In addition to brawling, you can have Nathan sneak up behind characters and snap their neck or put them in a chokehold.

I love the Uncharted games, but this is one area I wish they would tone it down a bit. There is a lot of bad language in Uncharted 3, most notable is the word s**t which is used quite frequently throughout the game. The name of Jesus and the name of God are also used in vain frequently in the game. There is no use of the F-Word as the game is rated T.

Sully will sometimes make comments in conversation that could be interpreted as sexual innuendo. (This is not something that happens a lot, but it did catch my ear a couple of times.)

There is a condom machine on the bathroom wall in one scene. It does not stick out, but I did notice it. (A friend of mine who played the game did not even notice it.)

There is a scene where Nathan Drake lays his head on Elena’s lap while she is sitting and another scene where the two embrace and kiss while standing. Both of these scenes were very modest.

One of the tombs that Drake and Sully enter is of a man that is said to have been into the occult and who used magic to conjure spirits (you do not see this take place, only references are made). Part of the level requires entering into his alchemist lab.

There are some enemies toward the end of the game that appear to be fire demons. They look like humans, but with flaming skulls for heads. I say appears to be, because they are actually not fire demons, but that is all I want to say without giving anything away in the story.

There are 100 treasures hidden throughout the game levels that the player can search for. Some of these treasures are of a spiritual nature such as old idols.

The Uncharted games are some of my favorite games on the PS3. In my opinion Uncharted 3 is one of the best looking games I have ever seen. In addition to its good-looking graphics, the hand-to-hand combat and the level designs have improved over the last two Uncharted games. As for the story, I did not think it was as good as the stories that were told in the first two Uncharted games. That is not to say that I thought the story was bad; the writers did a good job of showing the strong friendship between Nathan Drake and Victor Sullivan, but aside from that I felt like there were a lot of questions unanswered, especially when it came to some of the other major characters. That aside, Uncharted 3 is still one of the better games I have played this year in terms of fun. Is it appropriate for your family though? That is up to you the parent to decide. Hopefully this review will help.