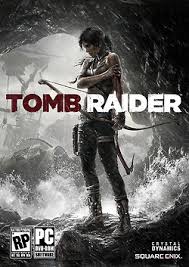 The first Tomb Raider game appeared in 1996 for the PC, PS1, and Sega Saturn. The game introduced the world to Lara Croft, a female modern day Indiana Jones, who packed two guns at her side and went spelunking in tombs for lost treasures. Over the years there have been many Tomb Raider games, some of them quite fun, and others that would be better off being buried in a tomb hidden away from the world.

This particular review is of the new Tomb Raider game simply titled Tomb Raider, just like the original game from 1996. This is not a remake, however, but rather a reboot of the entire series. In this Tomb Raider game, players will play as a much younger Lara Croft as she embarks on her first real adventure.

The setup of the story is pretty simple. Lara is part of an expedition team searching for the lost Japanese kingdom of Yamatai. A storm causes their ship to crash on the island, which happens to hold pieces to this lost kingdom, including the tomb of the legendary shaman queen of Yamatai, Queen Himiko, also known as the “Sun Queen.” Unfortunately, the island is also home to bunch of cultists lead by a man named Mathias who is trying to resurrect the Sun Queen. The game consists of Lara exploring the island, battling cultists, rescuing her team from the cultists, and also trying to find a way for her and her team to escape the island. It is one big adventure full of emotion and adrenaline.

There is also a multiplayer aspect of the game in which players can battle against one another on the island, but this review is based off of the single player campaign only.

Many of the cut-scenes show close-up violence; examples include a man being crushed by rocks, a man being shot in the head, and Lara being impaled by a nail. There is a lot of blood.

With this being Lara’s first adventure, she also experiences the first time she is forced to take a human life. It is quite an emotional experience for her, but afterwards she mentions how scary it is to her about how easy it was. Throughout her island adventure Lara will have to take many more lives and there are a lot of cultists that are trying to kill her. Lara will gain different weapons at her disposal, primarily a bow and arrow, a shotgun, a rifle, and a pistol. When Lara kills a person, blood splatters. The player will receive more experience points for killing with headshots. (Gain enough experience points and Lara can upgrade her abilities.) It is also possible to catch enemies on fire.

Some of the areas Lara explores are full of dead bodies, some hanging from ropes. Some areas have body parts and bones lying around, some in piles.

One area looks like you are walking through a pool of blood, but I will admit it could have been the lighting from the cave that gave the water a red tint to it.

This is the first Tomb Raider game to be rated M, and the rating is definitely evident by the amount of violence and blood that are in the game.

Bad Language is frequently used through the entire game from minor words such as hell and dammit; to more major words such as a**, s**t, and f**k. The name of God and Christ is also used in vain in various forms.

Lara wears a tight fitting tank top that shows a little bit of cleavage. Unlike past Tomb Raider games where Lara has been overly busty, this incarnation of her has her looking like a normal athletic woman.

There is a lot of occult content in Tomb Raider, but I would liken it to the film Indiana Jones and the Temple of Doom. It is there, but it is definitely shown as evil.

In some areas Lara will come across a body that has been strewn up as a human sacrifice. In some of these areas there are also cultists worshipping the Sun Queen.

There are idols in various locations of the island. Lara can light fires on the altars of some of these idols. (The game has various challenges that can be completed as side quests to gain experience points, one such challenge it to light the fires on these idols.)

There are references to ritual sacrifices.

Lara can find treasures around the island, one treasure looks like a demonic mask.

It is referenced that the Sun Queen has communion with the Spiritual world.

It is referenced that the reason there are storms trapping people on the island is because the soul of the Sun Queen is trapped in her decaying body.

There is a ritual performed at the end of the game where the cult leader Mathias attempts to bring a young girl to the tomb of the Sun Queen so the Sun Queen can possess the young girl and live again in her body. Lara interrupts the ritual and saves the girl.

In one part of the story, Lara finds one of her team members and says “Thank God you are alive!” to which he replies, “God has nothing to do with it.”