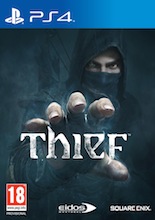 Thief is the first game in the reboot of an older series by the same name. The player plays as Garret, a master thief, who enjoys stealing from anyone, and obeys no one but himself. When a job goes wrong, and he wakes up after a year of slumber, he finds out that his companion is presumed dead, and his city is slowly falling apart.

In the midst of a plague, poverty, revolution, corruption, and greed, Garret must find out what happened to he and his companion. Along the way, he will help the oppressed peoples, fuel a revolution, and steal more stuff (what did you expect out of a game called ‘Thief’?).

Thief is a stealth game, but the player gets to decide how they want to play the game. They can stealthily move through secret passage ways and avoid confrontation. They can equip a blackjack, and knock out foes before disappearing into the shadows. Or perhaps they will choose the lethal approach, and use traps and arrows to permanently silence their foes.

Thief is a realistic, first-person perspective game. Enemies, as well of yourself, may be killed. Blood appears when anyone is shot with a bow, or stabbed with a sword. The player has a wide variety of weapons at his disposal, including non-lethal weapons (which knock opponents out), like the blackjack, blunt arrow, or choke arrow (which release a puff of toxin, and makes the guards choke until they pass out). Alternatively, players can use weapons like Sawtooth and Razor arrows, Explosive arrows, or the environment. Most environment kills come from dropping boxes on top of other people.

There is a fair amount of violence in the game that does not come from the player. Throughout the game, people will be hung, set on fire, or crushed from falling buildings. Guards will fight with peasants, and an inmate will crack the skull of another inmate.

It is possible to go through the game without killing or knocking anyone out. It is difficult, but I managed to do so during my initial playthrough. The protagonist also makes the point early in the game that no one should kill “without long thought about it, and not without a very, very good reason.”

Thief had a fair amount of language, but not as much as other games of the same rating.
I personally came across F*** 6 times, Bas**** 5 times, Sh** 8 (though half were used correctly for the time period, meaning feces), Bi*** 3 times, and Da** twice.

At the end of the first third of the game, the player will have to travel into a brothel. Along the way, there will be many prostitutes, but they will be fully dressed, and will not call out to the player. Once inside, however, things take a very sexual tone. Almost every woman is topless, and there are quite a few women. Around the brothel are women in bed with men, but for the most part, they are just lying there. Moaning can be heard throughout the building. The first thing the player sees is a woman preforming oral sex on a male. If the player explores a little, a cutscene will play, in which the main bad guy will demand an underage girl to be his partner for the evening. The owner of the brothel is either a female with a very deep voice, or is a cross-dressing male.

Later in the level, there will be three holes in a wall, with the option to look though them. The first hole will show a couple having very noisy intercourse, and the player has a full view of the entire thing. The next two holes are mandatory that the player look through, or they will not be able to continue the story. One contains a nude male, tied to a chair. He requests that his partner abuse him, and she does. Mostly, it is face slapping, and nipple grabbing. The other contains a city architect conversing with a topless woman. She massages his shoulders, bends over and shakes her butt at him (giving the player a very close up view of her exposed breasts), then they sit on a bed together. I cannot confirm this, but it appears that she gives him a hand job. If the player looks in the hole again, they will just be lying on the bed next to each other, conversing about how “big his tower is,” and how “it took 100 men to erect it.” They were referring to an actual tower, but within the context of the situation at hand, it was a sexual innuendo.

No reproductive organs are shown at all during the entire game. The player can see the entire body, including exposed breasts and butts, but the groin area is always blurry or obscured.

There is a ritual at the beginning of the game, performed by chanting hooded men. That ritual ends up bringing out a force called The Primal. It is not specified what The Primal is, but it is powerful, and the city is tied to it. If The Primal’s host dies, so will The Primal. Later on in the game, The Primal will be used to make the final boss float, explode, and create duplicates of herself. The host also has the power to turn people into zombie-like creatures. At the end of the game (SPOILERS)the player uses a stone to absorb The Primal out of the host. From what I saw, The Primal does not appear to be demonic of nature. It seems more strange, and otherworldly… an unknown mystery and power.

After the brothel level, the next level turns into a horror game. The player will have to travel into an abandoned insane asylum, and explore a good deal of it. Most of the time, the player will freak himself out, but the game will encourage him. He will often see something scurry by, or find a being watching him, though that being is never there when he investigates. A few times, creatures (that look like a bigger, scarier version of Gollum from The Lord of the Rings) will pop out and scream at the player. They will chase him later on in the level.

Being called “Thief,” Thief has a lot of thievery in it. Any object that shines can be stolen, no matter whom it belongs to. Most objects stolen are things like silver forks and spoons, but there are “collectable” objects, which require much more skill; these special objects can only be stolen by safe cracking, lock picking, or eavesdropping. The player can also pickpocket money pouches off of guards and townspeople.

I did not allow any of my siblings to watch or play this game with me. I was even uncomfortable with my parents watching. I don’t think that a child would enjoy this. The mechanics of the game are designed with an older audience in mind, and younger children will become frustrated at the difficulty of the game.

Up until the brothel level, I didn’t have a huge problem with Thief. It was made for an older audience, but I felt like a mature 15 or 16 year old could play it. Once I played through the brothel level, I could tell that the game deserved its M rating. I would easily equate this game to an R rated movie.

I enjoyed parts of Thief, but the nudity, lack of a strong story, and repetitive stealth tactics were not enough for me. This is one of those games that I’m glad my friend owns, because I would like to play it occasionally, but I wouldn’t want to spend money on it myself.

I would recommend being 18 and up to play.