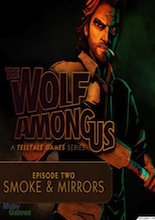 Telltale games has been growing in popularity since their excellent and genuinely powerful take on The Walking Dead. More recently, they have started branching out even further before, with this series branching into the genre of fantasy crime drama (which is a seriously awesome combination), and announced plans to reach into the Game of Thrones series and, oddly enough, a series based on the first-person shooter series Borderlands.

The Wolf Among Us is based on a series of DC comics (though is actually a prequel) called Fables, by Bill Willingham. The basic concept of the story involves fairy tale characters being ousted from their fantasy existence by some sort of cataclysmic event, leaving them now to live in the Fabletown district in New York City, assuming they can afford the magical glamours necessary to maintain their human images and keep their existence secret from the city.

Don’t mistake the presence of fairy tales as an indication that this is for kids, though. This story takes a far darker tone (though the original versions of many of these fairy tales weren’t exactly bright and snuggly to begin with), and is very clearly meant to be an adult game exploring adult issues. The game centers around Bigby Wolf, formerly the Big Bad Wolf, struggling to maintain order as Fabletown’s sheriff. There are murders, black market deals, shady prostitution rings… all sorts of things that make sense in context and show how hard life is for the fables forces out of their homes, but certainly are not appropriate for children.

That said, let’s dive into the details so you can decide for yourself whether this is appropriate for you or your kids.

NOTE: This review only covers the first three episodes of the game. More reviews will follow as new episodes are released.

The visual style of the game is meant to invoke that of a drawn comic book, so the violence doesn’t look particularly realistic. That said, it also does not hold back, and it doesn’t try to obscure itself; it’s not as graphic as The Walking Dead (it was about zombies, after all, a subject that demands a high level of gore), but it still has its moments. Murders involve severed heads shown in full detail. A bed is seen absolutely drenched in blood. A man is hit in the back of the head with an axe—though since Fables are unnaturally tough, he does survive. Characters are hit with bullets, slammed against walls, thrown across rooms, or have their bones broken. Again, the art style certainly doesn’t look realistic, but the game certainly doesn’t pull its punches when it comes to depicting violence.

It seems that throwing fairy tale characters into as dark and intense a setting as New York is a very effective way to inspire (and admittedly, kind of warrant) a rougher vocabulary. Words like the F-word and basically every common lesser swear word are used rather commonly by a variety of characters. While it certainly seems strange at first to see some of these fairy tale characters using such words, I can’t deny that the situations and overall tone of the game mostly eliminate that unease, but that doesn’t change the fact that such language is used regularly.

This game makes no attempt to hide the scummy parts of human nature, and sex is a pretty big part of those depraved depths. One of the murders involves a prostitute who was murdered, and the circumstances of her murder uncover unnerving facts that, while never showing any sexual detail, definitely gets into disturbing sexual deviance; for instance, someone has been using magical glamours to make a prostitute look like a woman they have a one-sided love for. As you can imagine, much sexual dialogue is involved since sex is involved in the crimes committed.

Georgie Porgie runs a strip club that is visited in the second chapter (and briefly in the third). It has many illustrations of nude women on the walls, and upon entering the establishment for the first time, Georgie is seen berating a topless woman for her lackluster pole dancing (Bigby can defend her from his verbal abuse if he so chooses). There is also a scene in a nearby hotel used for prostitution; though there is no outright nudity or sexual activity seen in this segment, a couple is heard in another room; Bigby can open the door if the player chooses, but he is quickly told to leave without the player seeing anything inside the room.

Magic is a big part of this story, but it’s about as vaguely-defined as in the stories this game is based on. The Magic Mirror from Snow White is a major part of the story. The genie’s lamp is seen often, but the genie is said to have been freed, and he does not make an appearance. Glamours, potions that disguise Fables in human form, are a major point of the story, and the witches that make them are often referenced. Only such witch is seen, but she does not expand on the magical details on the world at all beyond simply having a magical tree from their old world.

Drugs are referenced, and some scenes take place in a bar. Characters are seen drunk, and one disregards the fact that he’s on painkillers for the sake of a few drinks.

Ha! Even if I would have a kid play this game, I value my own life too much to try telling my sister I had her son play this game. Nope nope nope.

Wolf Among Us is very effectively presented—that much is clear. The story is compelling, the characters are strong and interesting, and Telltale’s classic formula of putting many important, morally difficult decisions in the player’s hands is back in full force. Like The Walking Dead before it, this game aims to stretch your decision-making skills and moral compass, and though it hasn’t done so as effectively yet, it certainly delivers on its goal.

It’s just one of those games where it functions very well as a unified whole, combining its visual aesthetic, it’s fantastic writing, and its interactivity to form a very compelling story. I have been enjoying it immensely, and it’s certainly done an effective job of drawing me into its world and characters enough to make me genuinely care how my actions affect them.

That said, there’s a relatively large amount of language and sexual content in this one, in addition to the violent content. It’s definitely a bit of a barrier of entry in terms of content, and I can say with confidence that I wouldn’t let a child play this until they’re well and mature enough to handle the difficult subject matter and the plain, uncensored way in which it’s portrayed.