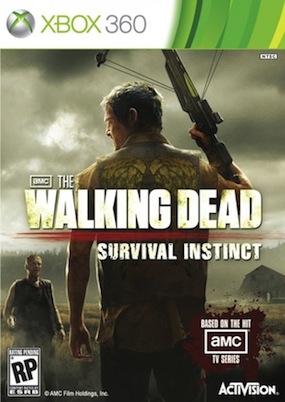 If you frequent this site, you may have read my review of The Walking Dead. That was an adventure game by Telltale Games, and it was a truly affecting and brilliant exploration of the human condition, and to this day one of the most emotionally difficult and morally challenging experiences of my life. This is what The Walking Dead, as a franchise, is supposed to be; not a mindless action-fest shooting countless undead, but a depiction of what humanity will become, what they must become, when faced with constant danger and near-extinction.

Then someone came along and said, “Let’s make a shooty-shoot game out of it!” This is an inherently terrible idea.

The Walking Dead: Survival Instinct specifically allies itself with the AMC television series (as opposed to the franchise as a whole, which started with a comic book), and stars Daryl, a major character from the show. And I will have to preface this review with a statement that, for the first time in a long, long time since I’ve been reviewing video games, I did not finish this game. I couldn’t. I’ll explain why in the conclusion, but for now, I’ll give a rundown of the content in the game, based on my experience and confirmed by the ESRB’s website to make sure I didn’t miss anything.

Violence:
Being a game about zombies, gore is actually rather necessary. And indeed it is present. The game is played from the first-person perspective, and the player uses weapons ranging from blunt instruments like metal pipes to a variety of guns to destroy the undead in his path. Since destroying the brain is the only way to kill a zombie, this means many heads are bashed in (as graphically as the feeble visuals allow), and some explode when shot with powerful guns. The player can also sneak up behind a zombie to stab them in the head. Some zombies are missing limbs, and sometimes zombies are found feasting on a dead body. When the player dies, a zombie bites under the screen (where the character’s throat is, from the first-person perspective) and comes away with a mouthful of blood.

Language:
The f-word, s-word, and any number of lesser profanities are found in the dialogue.

Sexual Content:
There is some sexual dialogue, but no nudity or depictions of sex.

Spirituality:
Nothing to report.

A Child’s Perspective:
This game was not made for children, and I did not have any play it.

Reviewers Thoughts:
If the content descriptions haven’t scared you off, that’s understandable; this is no more graphic than anything else in The Walking Dead franchise, and arguably no more graphic than anything dealing with zombies has to be in order to be effective. So allow me to explain why The Walking Dead: Survival Instinct is not appropriate for your children, you, or any other intelligent being on this planet.

This is one of the most bland, poorly-conceived, visually ugly, lazily-designed, straight-up un-fun and un-compelling video games I have played in years. Outside of the simple problem that such a simple “shoot through the zombies” setup is completely inappropriate for such a thoughtful and poignant franchise as The Walking Dead, the game itself is just terrible. I’ve seen games from back when the Xbox 360 first launched with better visuals, the game systems end up constantly breaking immersion (like randomly spawning zombies behind you where there were none a second before), and often end up backing you in a corner so you have no choice but to let yourself die and try again. The levels are designed with a degree of linearity that would make Final Fantasy XIII feel too free-form. The combat is utterly boring, and is only ever challenging when the game throws so many zombies at you that the clunky combat mechanics ensure your inability to succeed.

This game is not appropriate for your children, but more importantly, it’s just a mess. If you respect your own intelligence and want a truly amazing experience in digital media, buy Telltale’s brilliant Walking Dead game and leave this one on the shelf.