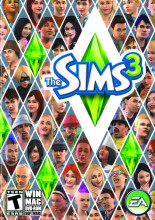 The Sims 3 is the third generation of the Sims games, where the player can create a character or a family of characters and simulate living out life from infancy to old age. The full life cycle includes: infant, toddler, child, teen, young adult, adult, and then elder. Characters can be created by choosing body types, facial features, clothing, personality traits and lifetime wishes. Or players can choose to play characters or families that are already created in the neighborhood.

The next part of the game is choosing the lot for the characters to live on. Lots can have a premade house or a player can create a house from scratch on an empty lot. Houses can be customized with furniture, wall treatment and floor treatments. Creating a house that is well liked by the characters increases the mood, therefore increasing the speed at which characters improve relationships and get promoted at work.

Once Sims are settled on a lot, a career path can be chosen and Sims characters can develop skills that will enhance their performance at work or just their abilities to get things done around the house like cooking, cleaning, and repair. Each Sim also has a lifetime wish and these are sometimes fulfilled by mastering a skill to the highest level.

The Sims 3 is not specifically designed to be a violent game, but there are some things the player can do to the Sims that are violent (although more in a dark humorous way as opposed to a bloody and disgusting way.) For example, a player can take away the doors, windows and smoke detector in a room and then allow a Sim character to set the house on fire giving the Sim no place to escape. A player can also create a pool and then remove the ladder while the Sim is swimming. In that event a Sim character will die of exhaustion.

Players can also choose personality traits for their characters that are negative such as evil, grumpy, hot-headed, insane, inappropriate, kleptomaniac, loner, loser, mean spirited, neurotic, and snob. When Sims interact with other Sims in the game they can be mean to each other by selecting the mean tab which then gives options of insult. As the negative interactions continue, more options for negative interactions are available such as slapping, fighting, insulting sim and/or insulting sim’s mother. Sim characters can then declare another Sim as an enemy. One a negative relationship is established it is difficult to bring that relationship back to a positive status.

Another avenue of violence entails choosing a series of negative personality traits like kleptomaniac, loser, evil, insane, and neurotic, which gives five options of a lifetime wish to choose from. Based on these five selections the Sim could choose to have a lifetime wish of Emperor of Evil, Become a Creature-Robot, Master Thief, Gold Digger or Live a Life of Luxury. There is a graveyard in the game and Sims with dark personality traits may aspire to see ghosts of specific people. In the “Live Life of Luxury” lifetime wish the Sim needs to marry rich and see their spouse die in order to fulfill their lifetime wish.

The language spoken by the Sims is a made up language that is incoherent to the player.

Sims in the game can interact romantically as young as teenagers. Same sex romantic interactions are also available for teens and older Sims. Teenagers can go as far as kissing and cuddling. To my knowledge teenagers are not able to have sexual relations with each other. Young adults and older can have sexual relationships with other Sims even if other Sims are married in the game. The term for sex is “woohoo” and the Sims will “play” under the covers. There is also a “try for baby” option.

In addition, clothing choices allow for suggestive dress. For example, short skirts and mesh blouses that show bras. Sim characters can also walk around in their underwear. Sims can also have multiple romantic relationships simultaneously.

There is little direct spiritual content. Mainly there are interactions and lifestyle choices that may contradict some spiritual beliefs.

Sim babies in the game can be given up for adoption and babies can also be adopted. Babies and children that are neglected can be taken from the family by social services.

Households can have bars where drinks can be mixed (referencing alcohol).

I enjoy playing The Sims to design houses and play out my dream life. The game can be played without the questionable moral interactions. I would express caution for when young teenagers may be playing the game. If I were a parent, I would be comfortable allowing my child as young as 16 years old to play the game provided I was able to discuss with my child the issues that some may find controversial in the game. I would still monitor how my child chooses to play the game and encourage them to play appropriately like I would encourage them to do in real life.