The Legend of Zelda Skyward Sword

The Legend of Zelda Skyward Sword 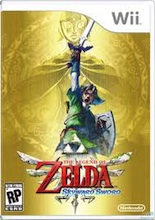 Once again you play as the hero Link. The game opens with Link being woken up by a nightmare. The nightmare he has hints at what he is about to get himself in to. He is then woken up by his best friend’s, Zelda, loftwing. A loftwing is a bird used for transportation in Link’s homeland, Skyloft, which is a town above the clouds. As events begin to unroll in this epic tale, Zelda eventually gets kidnapped by evil and Link sets out with his goddess sword and his companion, Fi (a guardian contained within his sword), to rescue Zelda.

What Parents Need to Know (Warning: This Review Contains Spoilers)

In Skyward Sword you will control everything with motion controls, except for movement which is controlled with the analog stick. When you swing the Wii-mote, Link, the main character, will mimic your movements swinging his sword in many different fashions. To shield bash you will simply shake the nunchuk.

There are many different weapons at your disposal as you progress throughout the game, some of which include, bombs, bow and arrows, a slingshot, a robotic beetle, a wind blower, a whip, a bug net, and two hookshots. To use these items you will need to swing and aim your Wii-mote. An example of this is when you use a bomb you either hold the Wii-mote above your head and swing it to throw it, or you hold it below your waist and swing the Wii-mote, like in Wii sports bowling, to roll the bomb in the direction you want it to go.

I also encountered some enemies that were a little creepy such as zombies as well as the final boss who has the appearance of a large demonic figure with flaming hair and a large black, evil looking sword. Another main character in the game, Ghirahim, refers to himself as the Demon Lord and also has a disturbing appearance. As the game progresses he begins to get black stitches in his face, and at the end of the game he wears very dark and disturbing armor. Ghirahim eventually turns into Demise’s sword which also looks evil. In order to defeat both of these enemies you will have to knock them down and flick the Wii-mote and nunchuck upward to jump in the air and stab them in the chest. In the battle with Demise, Link will twirl up in the air, in a much choreographed way, to stab Demise in the chest.

When an enemy is defeated they will disappear into a puff of smoke unless if it is a main boss battle in which case there will be a minor cutscene following their defeat (not counting the final two bosses). Some enemies will roll down hills when struck before they will disappear and sometimes when you shoot an enemy with a bow and arrow they might fall off of a cliff then disappear, depending on whether or not there is a landing.

I encountered no bad language in this game except some minor teasing conversation options.

Spiritual Content (Warning: This section is heavy with spoilers.)

Early on in the game there is talk about gods and goddesses. There is also a shield called the goddess shield that is an upgraded version of the sacred shield. In the bazaar there is a fortune teller that will tell you where your next objective is and can give you hints as to where treasure is located.

The main villain in Skyward Sword is a highly egotistical man named Ghirahim. Ghirahim considers himself to be the Demon Lord. Towards the end of the game, Ghirahim threatens Link by telling him something to the effect that he will defeat him and soak in Link’s blood with his evil power. Ghirahim also plans to resurrect his master, Demise, in order to take control of the world. The reason why he wants to take over the world is because in a very early time there was a war between the gods and Demise. Demise was beaten and sealed away for what was hoped to be an eternity. Eventually you will have to fight a different form of Demise called the Imprisoned. Once you defeat the Imprisoned, which you will have to do three times, you have to draw a magical seal with your Wii-mote to temporarily seal him away.

There is also a guardian, called Impa, who has magical powers. Her duty is to protect Zelda, another main character, at any costs.

A goddess is referenced throughout the game. In order to save you will need to have Link offer a prayer to a statue of the goddess. When the game begins there is a wing ceremony which is part of a way to honor the goddess. You will also obtain a magical harp used to make things appear and disappear. There is a song that goes along with this harp called the song of the goddess. A line from this song goes, “Oh youth guided by the servant of the goddess…unite earth and sky, and bring light to the land.” There is also a set of magical items that will allow you to withstand extreme heat and swim underwater. These items are given to you by passing tests in a place called the Spirit Realm, which were tests laid out by the goddess to test the chosen hero.

Towards the end of the game Link learns about a supreme power that will grant anyone’s wishes and fulfill any of their desires. This is what is known as The Triforce. Demise wants the Triforce for evil while Link and his companions need it for good. Hylia turns out to be the goddess of the land and Zelda turns out to be the goddess reborn in a mortal form. In order for Link to gain the full power of his sword and obtain the Triforce he needs to go through a magical ceremony.

As I stated before, Ghirahim plans on resurrecting his master, but in order to do that he needs to perform a ritual to gain the power Zelda holds within her. Eventually Demise gets resurrected and ends up being the final boss battle of the game. Once you defeat him he gives a speech to Link about how his hatred shall reign in a blood soaked land of darkness. In order to contain his evil power he is then contained in the Master Sword.

Being a fan of the Zelda franchise I was really setting my hopes high for this game. In my opinion Skyward Sword has the best story since Wind Waker and the best gameplay since Twilight Princess. The only complaint I have about the game is that it seemed to be extremely easy at times which disappointed me considering most Zelda games tend to be a decent challenge. But that is a complaint I can easily get past since this game has all that it needs to be my favorite Wii game and my favorite Zelda game, tied with Twilight Princess. I found Skyward Sword to be a double edge sword (no pun intended). There is not a lot of graphic violence, bad language or inappropriate sexual content, but with the extreme amount of spiritual content and references to evil forces and gods and goddesses, parents may want to take this into consideration when deciding if this game is right for their family or not.