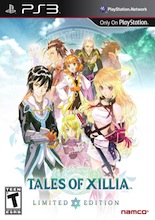 The “Tales” series of games was developed by Namco Bandai (formerly Namco). The first game released in 1995, with its latest American release being Tales of Xillia. The “Tales” series is most notable in America for its 2003 release on the Gamecube, Tales of Symphonia. The success of the series is due to its creative storytelling interwoven with a combat system that is not turn based, as it normally is in Japanese Role Playing Games. While not as popular in America as Final Fantasy, in Japan the “Tales” series is on the same playing field.

Tales of Xilila follows the previous games style as a Japanese Role Playing Game where the player can take individual control of up to six characters. At first, the two available characters to play as are Milla Maxwell and Jude Mathis, the protagonists. When they first meet, their mission as a team is unclear, but Jude is drawn to Milla because she has a focus: destroying a powerful weapon that kills spirits in order to fire. Along their mission, the team meets a number of characters who work their way into the story and battles.

This game’s fighting style is a “Linear Motion Battle System”, which basically means that although the option to run freely is available, it’s core combat is two-dimensional. Unlike typical, turn based JRPG’s, Tales of Xillia allows practically constant combat, which makes it compelling and exciting.

WHAT PARENTS NEED TO KNOW:

The combat system is actually not the main source of violence. Most of the violence where more is seen than slashing or lights flashing comes from cut-scenes. A few of them in the middle of the game have blood from swords slicing.

Enemies disappear after being defeated. By a character’s after battle taunt, it is assumed that monsters die. Not all combat ends in death, sometimes characters look no worse for the wear after they are defeated.

There is a scene where the screen is all black, but you hear slapping sounds as a woman is being beaten. She dies the next morning.

A man pushes a woman into a room where there is a blast of fire, then her arm falls into the screen, indicating her death.

Mila is dressed in the typical garb of any JRPG female character: clothes covering the essentials, with accessories dotting her body… most notably her boots that come up above her knees. Not much clothing to speak of, but still more modest than some.

Another female character, Presa, is dressed provocatively and running her hands over Milla’s body looking for something.

Maxwell is referred to as “busty” in a skit.

“Bazongas” are referred to by Teepo. They are also discussed in a cut-scene about “the fire of manhood,” which “bazongas” are the center of. May be lost on some, but probably not many.

A spirit talks about Jude “pouring loads of mana” into her… the conversation is tense with sexual overtones.

Leia is said to be “hot and bothered” by Jude.

A sexual relationship is referred to by two characters.

The spiritual content is essential to the story of this game. Right off the bat, Milla is surrounded by spirits, talks of spirits, and casts “artes” or spells. Mana is also central to the theme and gameplay. Mana is the substance that makes up spirits, and humans have access to spirits through their “mana lobes.” The spirits are theologically eastern, with different spirits for different elements. This makes the spirit system pantheistic, and though only one of the characters is referred to as the god figure, even he is not omnipotent. The gods and spirits can be defeated. There are incarnation (gods becoming human) narratives and small creation narratives. Although the creators of the game are just creating these from thin air, to some it may seem that this is what the creators of the game believe. Some will take the story and make it fit their perception of spiritual things. Once there is a reincarnation ritual. There is constant talk about spirits and their roles, faith, summoning, and worship. A conversation should be had with younger participants about the fact that the writers developed a story and that it is not real.

The game deals with a number of themes: redemption, death, and friendship. All these themes are intricately explored. However, this is typical of almost all anime, and they mostly have the same conclusion: redemption is accomplished by doing the right thing, death is able to be defeated, and friendship is a force stronger than the most powerful spiritual forces.

Parents Note: This game can be saved at any time with a quicksave function, so don’t fall for that “I just need to get to a save point” thing.

All told, Tales of Xillia was a fun and challenging experience. The game does a good job of giving gameplay tutorials, so you can always see how to do something again. It is also a long game; clocking in at around 40 hours of play time. This is not Grand Theft Auto, where you can make any choice you want. It leads you through a story with a specific goal in mind, and although sometimes failure is an option, death results in restarting the battle or the previous save point. The themes are well dealt with, and there is a good amount of moral triumph in this game. You’ve got to be able to separate fact from fiction, story from theme, and be able to navigate a PS3 controller with ease in order to get the most pleasant experience from this game.