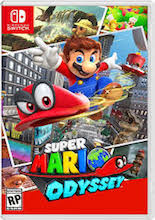 It’s Mario! What all do you need to know!

Well okay, there is some. Specifically that, while Mario games have of course continued releasing constantly over the last few decades, this is the first, big, real, proper Mario game since Super Mario Galaxy 2 released on the Wii.

As usual, Bowser has kidnapped Princess Peach, and is leaving a trail of destruction in his wake as he makes stops throughout the world to collect everything he needs for the perfect wedding. Following behind him with a new assistant named Cappy (a living hat that can transform and even help Mario take control of some other creatures), Mario sets out to help undo the damage Bowser has been doing and catch up to him so he can save Princess Peach.

The setup is familiar to anyone who’s played a Mario game in the past, and if you’ve played any of the 3D ones since Super Mario 64, the gameplay will be too. Mario is set loose upon large areas to find various objects (in this case, Power Moons), which are found by completing various challenges or finding secrets.

Mario has a history of family-friendliness, and this game is no exception. But let’s take a look, just in case.

Violence:
Super Mario Odyssey features the usual Mario fare of jumping on creatures that disappear in a puff of smoke, but the ability to take over other creatures provides more opportunity for violence. Even if it is all still very cartoony.

Mario can stomp on enemies as a dinosaur, shoot them with explosives as a tank, poke them with his pointy nose as some kind of bird-thing, throw hammers at them as a koopa… there are lots of different ways for violence to manifest depending on what Mario is controlling, but they’re all equally silly and not at all graphic.

Spirituality:
Magic is a thing in the Mario universe, but it’s very vaguely-defined. Mario will come across little skeleton people, and of course, Cappy allows him to take over other creatures in a way that could be described as possession. Like everything, it’s all very silly and at no point tries to present itself as witchcraft or anything.

Positive Elements:
As usual, Mario’s quest is noble, and each level finds you helping the denizens of a given area to recover from the damage Bowser has caused to their lives.

A Child’s Perspective: Kids love Mario. Adults love Mario. Everyone loves Mario. If your kid is in the thick of that pre-teen phase of hating everything that seems mildly “kiddy,” they may not get into this game, but that’s their own fault.

Odyssey makes a few changes to the formula; most notably that there are a ton more power moons than there were stars in previous Mario games, so the player is regularly coming across them while exploring rather than centering an entire level around getting one. And this works very well: Super Mario Odyssey is constantly rewarding the player for curiosity and exploration, and even in the later game when you’re just trying desperately to find the few missing power moons, the game is providing such excellent challenges that it still feels rewarding.

It even has a fairly simple cooperative mode, which allows a second player to come in and perform some of Cappy’s functions. It’s not as hands-on a multiplayer mode as the co-op in the New Super Mario Bros. games, but it’s much more interactive than co-op was in Galaxy, and it’s a good time if you want to get involved in your kid’s game.

Odyssey was expected to be one of the defining titles of the Switch, and even after excellent games like Breath of the Wild and Splatoon 2, it certainly is. There are plenty of great reasons to own this console already, especially if you have kids, but Super Mario Odyssey just shot up the list of those reasons. This is a safe, fun purchase that you and your kids can all enjoy.