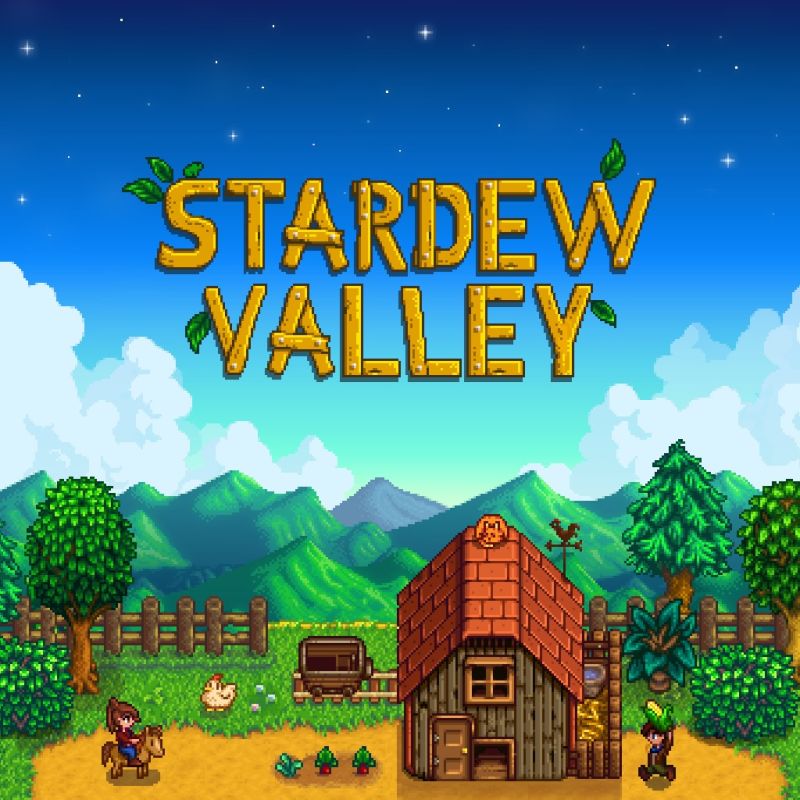 Game Description:
When your grandfather died, he told you there would come a time when the world wore on you, and you would feel the need to make a change. He gives you an envelope and says to open it when that happens. The time comes later, when you’re working a desk job at JoJa Corporation; the envelope includes a letter from your grandfather and a deed to a small farm in the nearby Stardew Valley. So you pack up and move to the country to start a simpler life on a farm.

Stardew Valley is a farming simulator, but it’s a lot more than that. In the spirit of similar games like Harvest Moon, there are also a number of characters in the nearby town that you can talk to, who all have unique names and personalities and preferences. As you explore the valley, you’ll uncover secrets, help the local community flourish, and perhaps even fall in love with one of the game’s many characters and start a family.

There’s a lot to do in Stardew Valley, so let’s make sure it’s appropriate for your kids.

Violence:
There’s very little violent content in Stardew Valley, but there is an abandoned mine with strange creatures inside that players can enter to gather various important resources (metals, gems, etc.). This mine has a variety of monsters, from little slimes to tar-like humanoids to annoying buzzing bees, and the player defends themselves with various swords and other melee weapons. The violence is very mild, there is no blood, and if your character’s health runs out you simply fall asleep and wake up at home the next day, having been saved by someone else.

Language:
Mild words such as “hell” are used on occasion.

Sexual Content:
Your character can form a relationship with the other villagers, and many of them could lead to marriage. When you’re married, you will occasionally be asked as you go to bed whether you want a baby, and if you say yes, the screen simply fades to black.

One character’s romance includes going into the town’s bathhouse one night, and later in the game she may fondly ask if you remember that night.

Spirituality:
Stardew Valley has a number of magical elements, all of which are fairly nondescript and fantastical. Small, sprite-like creatures ask you to collect various things to make the town better. There’s a wizard who lives outside of town, who makes potions and helps you understand the town’s magical past. Some artifacts are said to have a kind of magical power.

Positive Elements:
Stardew Valley is most notably a game about slowing down and appreciating the experience of life. It is, by its nature, not a game to be rushed through; the entire game is designed in such a way that encourages the player to take their time and enjoy the beauty of the world and the meaning of their relationships.

In addition, the relationships the player forms with the various characters all have some kind of positive meaning about understanding people and helping them. You’ll find a lot worth discussing in your interactions with the townspeople.

A Child’s Perspective:  Stardew Valley seems like such a slow game that children wouldn’t enjoy it much, but my nieces (who also love the Harvest Moon games) really enjoy it. And the increased interest in games like Minecraft among children has prepared them well for these kinds of games. As long as your child can read, there’s a chance they’ll like this more than you’d expect.

Reviewers Thoughts:
When I first started playing Stardew Valley, I had trouble grasping the game’s flow. I felt like there was too much to do and not enough time, like I couldn’t keep up with what the game wanted me to accomplish. But in the end… that was the point. Stardew Valley is a game about slowing down. It’s a game about allowing yourself to explore, to wonder, to improve, without fear of routine or deadlines. It’s a game about time management, about learning efficiency, and about letting yourself enjoy the process instead of sweating over the results.

For that, Stardew Valley has gotten a lot of love and attention. So much, in fact, that the game’s creator is still making content for it, including a cooperative mode available on the Switch and PC (and soon on the PS4 and Xbox One). And its reputation is well-earned. The game is inexpensive, but gives you a lot of content, ensuring you can spend a lot of time building your new life on your farm and growing close to the people nearby.

If you want something as vast as it is calming, Stardew Valley is the game for you. And if you want to try something for your kid that’s a bit different from the usual online shooters and hack-and-slash action games, it’s a fair bet for that too.