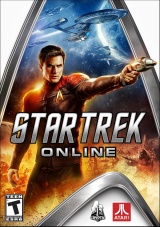 After two cancelled attempts by other developers and almost 10 years of waiting, Trekkies finally have an online game based in the Star Trek universe. The game is set a few decades after the events of Star Trek: Nemesis, the Trek movie released before the most recent Star Trek adaptation. The Klingons, Star Trek’s famous race of angry ridge-headed aliens, severed their friendly ties with the Federation after a Klingon invasion of an enemy race was disapproved by the Federation. This move has led to war rekindled between the two factions. The Romulans, another race usually antagonistic towards the Federation, have been devastated by the destruction of their home planet and seek revenge on those who they believe failed to protect them. The Cardassians, a race featured in the Deep Space 9 series, are rebuilding after the Dominion War, in which they fought with the Federation for many years. Certain elements in Cardassian space are trying to sever ties with the Federation and return to a military dictatorship. And the cybernetic Borg, believed to be defeated by Captain Janeway and Voyager, return to destroy whatever they are unable to assimilate. In this volatile time, you take on the role of a Federation or Klingon captain attempting to either protect the Federation or expand the Empire.

You begin the game as a Federation character. You can choose to be one of the major races friendly to the Federation, or you can create your own unique alien race. Once you have a certain rank of Federation character, you are able to create a character allied with the Klingon Empire. All characters specialize in one of three areas. Tactical officers primarily have skills which help them deal damage in space and on the ground. Engineering officers specialize in using a ship’s systems to their fullest, such as redirecting power to certain systems on the ship in emergencies. On the ground, engineering officers can recharge your team’s personal shields or build devices that help you in combat. Science officers are skilled at debuffing enemies and buffing your own ship and your allies’ ships. On the ground, science officers can heal wounds and aid your away team by hampering your enemies in various ways. Your character also has access to a variety of Bridge Officers. Bridge Officers come in the same three varieties as main characters, and provide additional skills to help you in space and on the ground. You can equip your bridge officers for ground combat as you would equip your own character.

The key ingredient in your ability to defend the Federation or grow the Empire is your ship. Ships can be customized in a variety of ways depending on your style of play. If you fly a Cruiser with a slow turning radius, you would probably want to equip weapons with a larger arc that allow you to broadside an enemy ship, much like an ocean-going ship would have done with cannons in the 1800’s. If you fly a faster ship, you could equip powerful cannons for a frontal assault. The class of ship you can fly and the level of things you can equip are based on your rank.

Most of the game’s PvE (player versus environment) content at the time of this review is on the Federation side. The Klingon faction is almost completely PvP (player versus player) with very little additional content. The majority of both ends of the game are space-based combat. You equip your ship and destroy your enemies. Some missions also have ground combat, where you take a team of your bridge officers and defeat your enemies face-to-face. Most of the game’s missions focus on combat; however some missions are based on exploration or diplomacy. As you play the game, you collect various items you can use yourself or sell. Items that other players may be interested in can be sold on the Exchange, where you list items for sale and reruse other users’ items. Exploration and PvP missions allow you to earn various badges and merits which can be exchanged for items. You can also search for anomalies that can be exchanged with a set of scientists for new gear.

As was mentioned previously, the bulk of the game revolves around space and ground combat. Ship-to-ship combat includes plenty of explosions and destroyed ships. Large ships, such as Borg cubes, explode into large chunks that either disappear or blow up on their own. Ground combat features attacks with various energy weapons, martial arts, and a few melee weapons (most notably the Klingon bat’leth, a large, curved, sword-like weapon wielded with two hands). Some attacks electrify enemies, hold enemies in place, or ignite them on fire. There is no blood or other gruesome elements. Dead enemies typically slump over and disappear. Some levels have bodies here and there in the environment, usually when you have to investigate an attack that has taken place.

None of the official portions of the game include any offensive language as of the time this review is being written. As in any MMO game, however, players have plenty of colorful things to say. In-game chat has a basic profanity filter, but expect profanity to slip by (mostly language compatible with the game’s rating).

Star Trek has always been known for including some seductive style costumes. A few female characters from various races in the game sport outfits that resemble bikinis. Others wear tops that show cleavage. Some players have access to miniskirts for their female characters and bridge officers styled after the uniforms from the original Star Trek series.

There are a few “spiritual” references in the game, but they are to made-up religious elements from the Star Trek universe. Most of these faiths have some kind of scientific explanation attached to them. For example something that appears to be a ghost is really an incorporeal being from another dimension. One race worships beings that are extremely powerful, but these beings are not regarded as gods by other races.

Star Trek Online fares well for an MMO in the categories discussed above. The game’s hot spots are reflected accurately in its T rating. I also found Star Trek Online to be a lot of fun when I got started with it. I was quite the Trekkie myself in Middle School, so I enjoyed being able to jump in to the Trek universe on a more intimate level. Unfortunately, the game has a lot of areas that need to be expanded (or completed for that matter). Even though the game-play end of things is fairly well polished, there is not much game to play. All MMO’s are constantly growing, but Star Trek Online feels like it was released too early. The Klingon faction is severely lacking in content at the moment. I started a Klingon character, but I did not see too much point to advancing him since I can do most of the same things with my Federation character without having to grind PvP to advance him. Once you hit the rank of Captain, the Federation content slows down quite a bit. I had to repeat some missions several times to be able to reach the highest rank in the game (Admiral for the Federation, Brigadier General for the Klingons). Once I did reach Admiral I was able to complete the Admiral-level content quickly. Many of the repeatable missions get really boring after a while. If you are looking at purchasing Star Trek Online, my recommendation is to wait a bit until they develop more content before you commit to a monthly subscription.