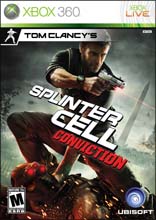 (Warning: This review contains spoilers and is primarily based off of the single player campaign, but some references are to the co-op play.)

Splinter Cell Conviction puts players in the shoes of Sam Fisher, a former Third Echelon operative, who left the organization after his daughter was killed in a tragic car accident. In Conviction, Sam is lured back into action by a former colleague who tells him that his daughter is actually still alive. However, this colleague will not divulge the details of this information unless Sam helps fight against Black Arrow, a private military corporation, which may be plotting against the United States.

Conviction is a bit of a departure for the Splinter Cell franchise in that previous entries were more stealth focused; avoiding confrontation was pretty much a must. In Conviction, this has drastically changed as Sam is still lurking in shadows, but not to avoid being detected as much as he is stalking his prey and waiting for the perfect opportunity to kill them. The overall tone of the game is much more violent because of this. One new gameplay addition called “Mark and Execute” also conveys this violent tone as the player kills an enemy by melee combat which then gives the player the ability to mark or highlight several enemies at once and then swiftly execute them with gunfire with the press of single button.

Sam has several ways to dispatch foes in Conviction. Melee combat will see Sam breaking enemies’ necks, or quickly punching or kicking them and then shooting them at close range. Blood will spurt from gunshots and can be smeared on walls and or on the floor. One scene depicts scientists being killed while on their knees begging for mercy. The most extreme violence occurs when the player interrogates certain enemies during the course of the game. This can be quite brutal as you can guide the enemy by holding them by their neck and directing them to objects in which to torture them with. The player can slam enemy heads through sinks, burn their faces on stove tops, or just plain beat their heads against the wall to get the answers needed. The more the player interrogates them, the more bloodied and battered their faces become. One scene depicts Sam having to strike an innocent female, although this is at her request in order to maintain her cover.

Conviction features quite a bit of bad language such h***, a**, b***h, s***, and f***, and is used quite consistently throughout the game. It mainly comes from the enemies you fight against in the single player and multiplayer modes.

Some sexual references are made in the game including a reference to human sex trafficking. Also, there is a mission in which there are women dressed in lingerie; some are dancing for mobsters and others are passed out on beds.

There are some drug references made in the game.

Splinter Cell: Conviction has changed a lot from previous Splinter Cell entries. Whereas stealth and avoiding confrontation was encouraged in past Splinter Cell games, now killing via stealth is encouraged. Parents should take into consideration the violence, scenes of torture, and bad language that are in this game when deciding if this game is appropriate for their family or not.