South Park: The Stick of Truth

South Park: The Stick of Truth 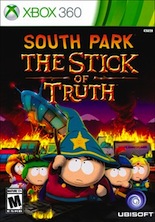 South Park is a satirical, irreverent comedy show intended to push the envelope as far as it can be pushed. Animated in what would be called papercraft, there is a crude look, feel, and attitude to the show. The video game is no different. While conforming to an RPG style of play, South Parkclearly tries to be as ridiculous and insane as possible. The player assumes the role of the new kid in South Park, who has a secret that no one, including him, knows. As the new kid begins his journey, he gets acquainted with some of the well-known characters of the South Park universe, including the well known Cartman, Stan, Kyle, Kenny, and Butters. The new kid levels up in one of four different classes: Warrior, Mage, Thief, and… sigh… Jew. Like I said, irreverent. The gameplay is turn-based role playing style, combining elements of Paper Mario and Final Fantasy.

Players will have more to do in combat than just press a button in order for an attack to happen, they will have to time their attacks so that the characters can do maximum damage. Status effects applied to target include bleeding, which produces blood. However, since the characters are made of paper, the violence is much less realistic. It is unclear whether characters actually die or not, since after combat you can hit them and they make noise. But the apparent violence is very real, as characters take damage evident in their face (black eyes, blood trickles from the mouth, etc.)

The language in this game is improbably strong. Every swear word on the planet is in this game, in creatively combined ways. Cartman has a spell where he says a bunch of swear words and then shoots them at an opponent. Pretty much every other character swears as well. Insanely high use of the f-bomb.

The game is loaded with sexual innuendos… and full-on sex. They don’t try to hide it at all. Some characters are doing sexual things in their houses. Some characters are doing perverse sexual things in their houses, like bestiality.
There is a scene where the player’s parents are having sex. In this scene, you end up fighting an enemy underneath your parents while they are in the act, body parts visible and all.

The player crawls up a man’s rectum, where multiple sex toys are seen. Sex toys are also located in some character’s drawers, where they can be sold.

There is a scene where the aliens are probing people’s anuses.

You see some character’s posterior.

Jesus is in the game, and the player can use a rosary to summon him into a battle where he fires a machine gun at all the enemies. First, you have to “find” him by playing hide and seek in the Church. Irreverent humor towards God and the Church is obvious.

South Park has a long history of pushing the envelope, and with the game there is no difference. The creators took everything gross, crazy, or just downright insane and put it in the game. There is a section in an abortion clinic where aborted fetuses become Nazi zombies and start attacking people, including the character. The boss in that stage is Khloe Kardashian’s aborted fetus, “the biggest fetus they’d ever seen.” The magic system is all about the player’s farts. There are a significant number of celebrity appearances that are all directed at poking fun at them.

Parents: The save feature in this game is erratic and uneasy to guess. The player needs to reach a “checkpoint”, usually after some sort of quest is completed or important scene happens.

After completing this game, I thought to myself, “That was… awful. But it was pretty fun.” There were just so many times that I couldn’t believe what was happening on my television screen. The way in which the story unfolded was classic South Park style, and I’m not really all that surprised. The craziness level was incredibly high, and the gross factor was all too evident as well. Really, unless you are a fan of the series, I don’t see any reason for anyone to play this game. It is very obviously unsuitable for children, but then again that’s not the intended audience of the game.

Overall, South Park: The Stick of Truth was wacky, crazy, disgusting, a little challenging, interesting, and entirely too short. I think I finished the game in less than 15 hours on the first run-through, which is very short for a video game these days. It’s up to you if you want anyone in your house to embark on this zany (and off-putting) adventure.