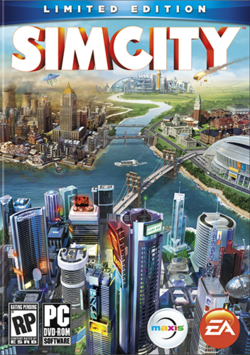 The SimCity franchise is the grandfather of nearly every city simulation game in existence. The general concept behind SimCity is simple: build a city that is financially stable with happy, healthy denizens. Though the concept is simple, there is a lot that must take place in order for your city to grow. You begin by building roads and zoning for residential, commercial and industrial areas. Your city must have reliable power, water, garbage/recycling and sewage services. Your sims (virtual people) will need health, police and fire coverage. Education provides many benefits and is an important part of your city. Road improvements and mass transit will become important as your city grows in population. Parks and some city services improve land values, bringing in wealthier sims. Careful planning is required in all of your zoning and construction so that you can maximize land values and minimize things that your sims will find unpleasant, such as zoning residential areas near garbage dumps or polluting factories.

This latest SimCity comes 10 years after the last “true” SimCity game (SimCity 4) was released, and it shows. It features a new game engine that not only simulates your city, but also simulates individual sims that you can follow as they live in your city. The game also features graphics that are vastly improved from its 10-year-old predecessor. Unfortunately, if you have heard about this game recently, it is probably due to an initial release that will go down in history as one of the worst game launches ever. To make a long story short, one of the controversial elements of SimCity is a requirement that you must be connected to the internet to play. Initially, this was billed as an opportunity to cultivate multiplayer regions of cities with a global economy. Critics claimed that this was an intrusive method of preventing software pirates from stealing a game you should be able to play without internet requirements. In the first week of launch, the always-online requirement coupled with dismal server capacity resulted in large numbers of people unable to play the game they had purchased. The first week was so bad that EA has given a free game to those who endured SimCity’s launch. Despite this, SimCity looks great and is fun to play now that these issues are being resolved.

The game earned its E10+ rating for this category. The most notable violence in the game comes from your police engaging in shootouts with criminals. You can only see this if you zoom in on some crimes in progress at slower game speeds. These shootouts do not result in any deaths, injuries or blood. You just see criminals and police shooting at each other for a few seconds until everyone disappears when the criminals are apprehended. If you highlight a building where an injured sim resides, you can hear audio of a person falling down and getting hurt. Disasters can also be violent. Tornadoes and earthquakes toss cars around and wreck buildings. A giant Godzilla-esque fire-breathing lizard torches buildings. Meteor strikes can rain fire from the sky on your city. A UFO can fly in and zap buildings. A new flavor of disaster for the series, the zombie outbreak, features glowing green sims that your police must contain. Police shoot at zombies, but there is no blood or death. The news image for the zombies may be a bit creepy for younger players.

I have not discovered any language issues in the game.

I have not seen any spiritual elements in the game.

One of the city specializations you can choose from is gambling, which enables you to build casinos in your city. Though casinos can be profitable for your city, they bring large quantities of crime that require a significant police presence to tackle.

The newest installment in the SimCity franchise is just as addictive and fun as the previous games. There is very little content-wise to be concerned about in the game. SimCity games can actually be a good teaching tool for a variety of subjects. For example, if your city runs out of money, you have the choice to either take out a bond to give you time to get your financial house in order, or you can try to make changes to eliminate your monthly deficit (raise your taxes or turn off services). This could teach some good lessons about basic financial management. The game also deals with some real-world issues worth discussing, such as health care, crime and pollution. I expect that some of the gameplay issues discussed in the introduction will be addressed as the developer refines and improves the game post-release. Even so, the game is still fun in its current state. Now if you’ll excuse me, I have a city to run….