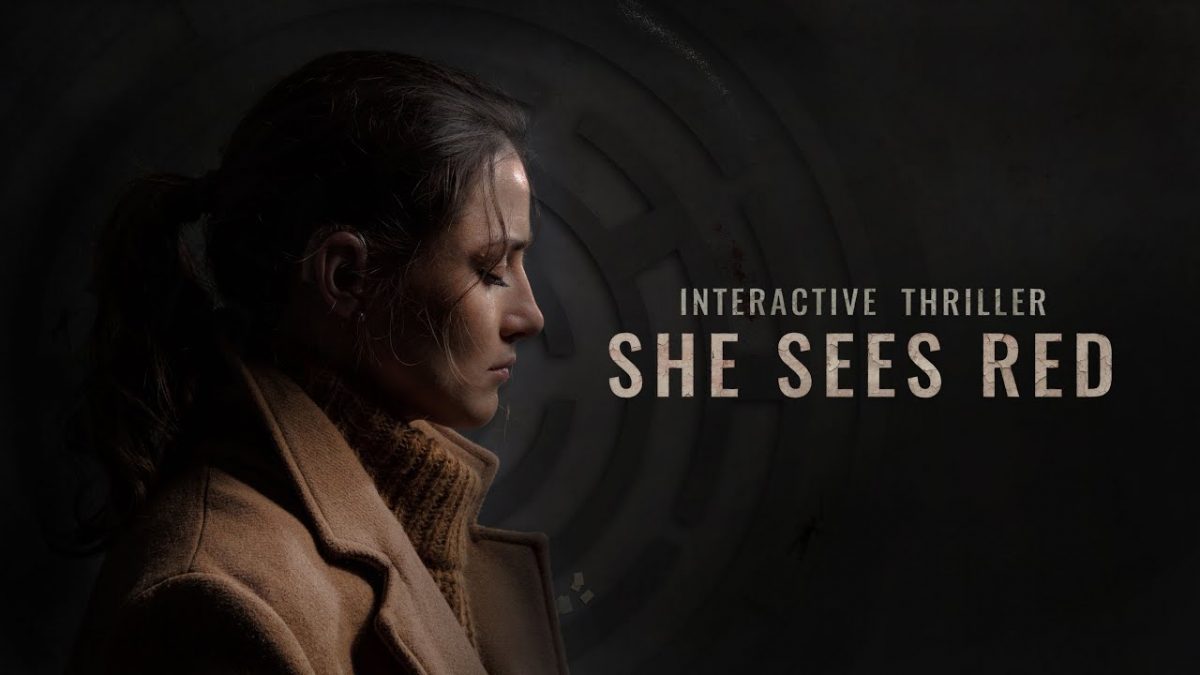 Game Description:
I usually keep up with the interactive fiction scene, but while browsing the Microsoft Store, I was surprised to find a game that had slipped under my radar: She Sees Red, an interactive movie about a detective investigating a murder at a nightclub.  Interactive movies—games where players navigate filmed footage as the main gameplay element—have been making a resurgence in recent years, so there’s no better time for She Sees Red to come out.

Will it be an interesting mystery, or a terrible tale?  Let’s find out.

Violence:
Oh yeah.  We start with a man bleeding out of his mouth and dying, because he was stabbed in the ear with a pencil.  That basically sets the general tone.

If this were an actual film instead of a game, I think it would be rated PG13 or even R.  Not only because of the blood, but also because of the. . .

Language:
Yep.  Heavy and light swearing both shows up here.

Sexual Content:
We see a woman and man nude in a bathtub, and see one of the woman’s breasts.

The film is also dubbed in English, and was originally shot in Russian.  Some lines are dubbed well, a few others, not so much.  So be aware of that.

You can skip scenes you’ve already seen from the pause menu, but if you don’t know that’s an option, you won’t do it.  The game should really inform the player about it.

Positive Elements:
This is a really interesting game.  The story and gameplay are both simple, yet gripping, and the thrilling music fits the nightclub atmosphere.  I also like how it can be played in a relatively short session: each playthrough lasts around 1 hour.

A Child’s Perspective:
If your teenager is eager for an interesting movie-mystery, then they may want to check this out. Just realize the language and sexual content is equal to about an “R” rated movie.

Reviewers Thoughts:
This is one of my favorite “film-games” in a while, for sure.  Its mystery about why the killer did this, and whether the detectives will catch him, is really cool and kept me playing.  It’s actually a really interesting dynamic, making decisions for the killer while hearing the conclusions of the detectives.  The editing is also perfect, and I was on the edge of my seat to whether the killer would be caught, or get away.

If I had a criticism, I definitely wish there were more choices and more ways for the story to change.  But that’s a lot to ask of an independent project, and I do like the choices that were given.

I definitely recommend She Sees Red.  Just remember that it’s a film for mature audiences, and not for kids.