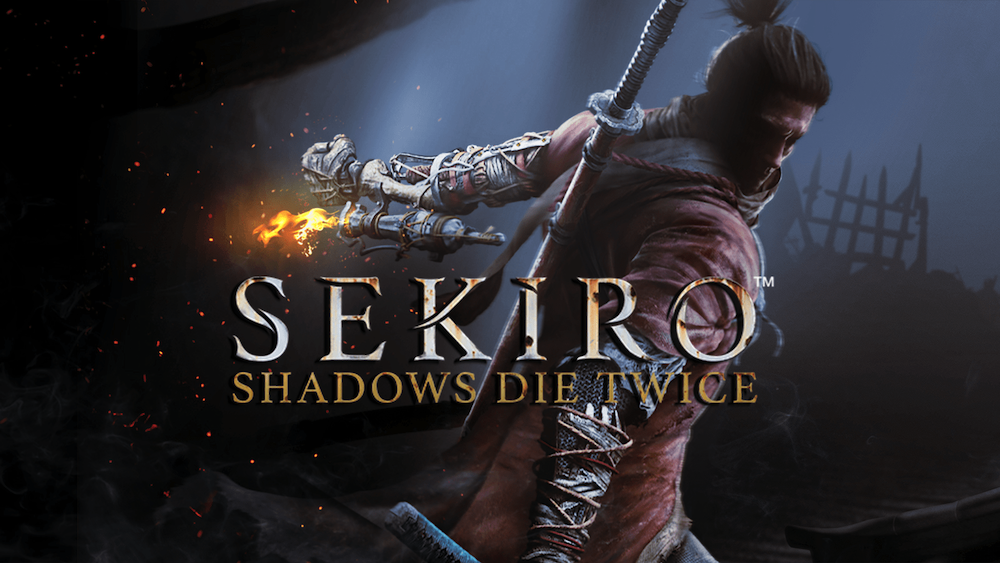 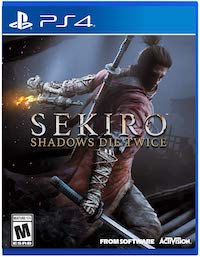 Game Description:
If you or someone in your house plays video games, you may have heard of the Dark Souls series. It’s a fantasy action RPG famous for its punishing difficulty and fair, balanced gameplay. It’s become so influential that the wave of similar games has been dubbed the “Souls-lke.” And From Software, the developer behind Dark Souls, has managed to stay on top of this trend by creating other games in that same spirit. Sekiro is the latest release in that vein.

The player takes on the role of The Wolf, a shinobi warrior who is honor-bound to protect the young Lord Kuro. Kuro is of the divine bloodline, and his blood contains the power of immortality; when The Wolf is killed, Kuro grants him this resurrective power in order to serve as his protector. But many will stop at nothing to gain the power of the divine bloodline, and The Wolf finds himself fighting amid the flaming battlefield of his nation to protect the young lord and stop this power from falling into the wrong hands.

Violence:
The player will fight a great variety of enemies, mostly human, but some inhuman. Some enemies are large humanoids, or more fantastical monsters such as a giant ape or a colossal snake. Hitting enemies with attacks results in a spray of blood, and fatal wounds include a gratuitous, stylized amount of blood spraying from the wound. Enemies will scream and hold wounds, or put their hand out to try and block the sword before it plunges into them.

In normal combat, there is no graphic violence such as decapitation, but there is one animalistic monster whose head is severed (and later held in its hand while it attacks anyway), and an early cutscene portrays The Wolf having his arm cut off.

Spirituality:
Sekiro is set in ancient Japan, and includes some elements of fantastical lore and mythology. This mainly manifests in the magic surrounding the power of resurrection, which rests in the blood of Lord Kuro. There is also an order of monks that pursues a fabrication of this power, and in doing so becomes infested with an evil, false immortality.

Miscellaneous:
The player can collect various types of sake, and serve it to other characters for a chance to learn more about them.

Positive Elements:
Sekiro is a game about honor, and protecting the people we’re close to. It also displays, in stark detail, the consequences of trying to pervert something sacred for the sake of personal gain.

Reviewers Thoughts:
Sekiro: Shadows Die Twice is the biggest departure From Software hsa yet made from the Dark Souls formula. The soul (haha) is certainly there, but the game feels different in many major ways. This is mainly felt in the combat and leveling systems, which rely a lot less on the player’s level relative to the enemies and a lot more on the player’s complete mastery of the game’s systems. The player will learn to battle enemies with exact timing and precise action, and this, far more than learning new techniques and gaining more health, is the key to succeeding at the game.

This puts more pressure on the game design though, and for the most part, Sekiro delivers. It’s difficult and brutally punishing, but I slowly learned how best to approach the game’s various situations and come out of them alive, and the experience was immensely satisfying. But even then, a few battles were simply too overwhelming, too unbalanced in favor of the enemy, to be particularly enjoyable.

But these are the things we expect from a From Software game. Overall, I enjoyed Sekiro a great deal, and appreciated seeing the trademark narrative style applied to a story with a bit more blatant development and progression. At its best, Sekiro truly feels like I’m playing through an ancient Japanese myth and living out the fantastical experience of an ancient shinobi warrior. And if you or your child can handle the violence on display, I think you’ll also get that same feeling.

Sekiro is a game that demands precision, ingenuity, and patience, and rewards you handsomely for those qualities. I had a great time with it.