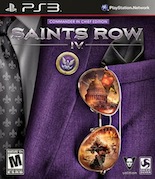 The fourth installment to the Saints Row series is cut from a different cloth than the previous Saints Row games. If you have not played any of the series before this one, you will most likely have no idea what is going on in the story, as quite a bit of investment is needed. I just looked up the background of the story on Wikipedia, which filled in all I needed to know.

Saints Row is a quirky sandbox RPG where you take the role of a completely customizable President of the United States with lots of guns and even more attitude. The leader of the Third Street Saints gang have grown their empire so large that “The Boss” is head honcho of America, but that ship sails shortly after an alien invasion captures the key members of the third street saints and stows them away in their own personal virtual nightmares. The Boss is placed in a simulated Steelport (the city where Saints Row the Third took place). The simulation gives way to The Boss having superpowers, getting more and more powerful with each mission, until finally facing earth’s greatest menace: the alien overlord Zinyak.

This game is rated M for all the reasons a game would be rated M.

There is a significant amount of violence in this game, with everything from blood when shot to ripping someone’s head off. HOWEVER, something that is different with this game is that even the simulated violence is simulated. The characters themselves are characters in a video game… in a video game. Smashing an alien with the people’s elbow is indeed violent and may spur children to do those kinds of actions, but as the player, the game gives you incentives to cause as much carnage as possible. You don’t feel bad for destroying images that are constantly pixellating. On a scale of one to 10, the violence in this game is about an 8.

Yes. Every single curse word in the history of the English language is used. Vile, vile language. Creatively used at times, but it doesn’t make it any less crude. And it’s not every once in a while. It’s every ten seconds.

A character is seen looking at a magazine with a topless woman on the front, not covered by pixels. – this is the 1% remaining nudity.

The main character can “romance” each member of the Saints… including the robot. While no nudity or sounds happen, and rarely do actions happen that are sexual (the screen fades to black), the conversations are tense with sexuality, and nine times out of ten, end up talking about sex. Once, a character mentions the position they will be in.

The female clothes can also be very, very revealing up top, and one of the characters mentions her sexual fantasies occasionally. All in all, this is an extremely sexual game.

There is not a lick of spirituality in this game.

Saints Row has been a series of jokes and parodies. One of the first scenes starts off with an “Armageddon” reference, and the jokes keep rolling. But, anyone under 18 probably wouldn’t get a lot of them, since they come from the 80’s and 90’s.

This game saves at any point outside of auto-saving.

Before I say anything else, let me say that this game has a lot of crude content in it. A LOT. But I still had fun playing it. In fact, I had a lot of fun. The combination of ridiculous superpowers, the craziness of the gameplay, and being able to run up buildings gives the game continuous and fast-paced action. Just being able to leap from the tallest structure in the game, float to your destination, and then stomp onto the ground from 1500 feet in the air feels epic. Gameplay changes and is fresh enough to keep the player engaged. The goal is also clear the entire time, so you don’t lose sight of what you’re doing.

Also, the violence mentioned earlier is usually something that I personally would feel bad about. I don’t like breaking rules, and even within the video game universe, I feel bad when the rules are broken or “people” are hurt. But what Saints Row did is gave the player a reason to break the rules other than to get paid. The characters in the simulation weren’t real, and the ones that were real existed as aliens. I never felt bad about punching a pixilated image of a civilian, because it wasn’t real even within the game. It was a purposeful wreckage of the system, not mindless mayhem for more money. I appreciated that, and it gave me a video game experience I haven’t had in a while… purposefully non-realistic sandbox gameplay.

That said, I would not recommend this game for anyone under the age of 17, which M-rated games are meant for. And this one is rated M for good reason.