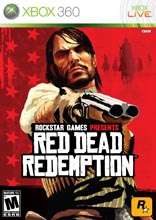 In the latter days of the old west, when civilization and government are starting to replace the customs and morals of the period, former outlaw John Marsten’s violent past finally catches up to him. His quest for redemption, however, is forced upon him by government officials who want him to kill the members of his old gang. Failure means the death of his wife and son. With so much at stake, John sets off on a journey that will take him across the expansive state of New Austin and even down into Mexico.

Red Dead Redemption is made by Rockstar, the same company behind the Grand Theft Auto series, and thus the company that popularized the term, “sandbox game.” A sandbox game is a game that has a large open space, like a city or even a continent, and allows the player to wander it and partake in many different activities. Littered throughout the game is a set of missions that advance the story of the game, but the player can choose to take them on immediately or go do other things first. The setting for this game is the wild west, a place of violence, savagery, and a clear-cut moral code that is enforced in a simple manner: cross someone, and you will likely get shot.

In such an expansive free world set in such a time, it can be expected that a realistic portrayal will have plenty of morally questionable aspects to it. Indeed, this game is rated M for a reason.

Action plays out from a third-person perspective. You use a variety of weapons, such as rifles, revolvers, shotguns, dynamite, and more, to take out enemies and go hunting. There is no gore, but shots are met with a decent amount of blood, especially if someone is shot in the head. Blood can splatter on walls, and pools of blood are common when enemies fall to the ground. This being the wild west, many violent acts are seen; for instance, sometimes you will see a man hold up and shoot another man, or attack a prostitute (in both cases you can lawfully interfere by either hogtying or shooting the offender).

The player can also hunt. The game world is populated by a lot of wildlife, even to the point where certain animals are indigenous to different areas of the map, going about their business all the time, everywhere you go. The hunting itself is no more violent than the battles, but once you kill one, you can skin it to get its pelt, meat, and other valuable parts. This is implied offscreen as we see John plunge a knife down: though we do not see the skinning itself, blood squirts out and onto the screen, implying but not showing the skinning.

A less common occurrence is the player coming across cannibals: these people are at a camp with someone hogtied next to them, and pools of blood with bones and, occasionally, severed heads. You can kill the cannibal and free the captive or just leave them there. This is only required once, and the quest is optional anyway, but the player can run across them now and again at random spots in the countryside after that.

A man is briefly seen (and heard) having sex with a woman lying on a table. Her breasts are exposed. Though this is important to this particular person’s character development, the scene is a bit gratuitous.

In one story mission a man is seen hung from a noose in a barn: he is fully naked, though his front genitals are obscured by shadows and cannot be seen clearly.

The corrupt Mexican government will often mention the girls they will take advantage of after raiding rebel hideouts, and some officials are seen with a noticeably unhappy girl in each arm. Sexual dialogue is spread throughout the game, mostly in Mexico: rarely anything astoundingly graphic, but it is there nonetheless.

There is one mission, however, where a woman is kidnapped that John goes out to rescue. As John comes to the hideout to rescue her, some of the bandits talk about how they would like to sexually ravage her. They get offensively graphic in some of their comments.

On a more positive note, the fact that John is a married man comes up a lot in that he will not sleep with other women. There are prostitutes all over the place who will try to proposition you, but you cannot buy their services. Now and again someone will tell John that he can have his way with a woman, or suggest that he buy a prostitute, but John always refuses on the grounds that he is married.

The only religion that gets any meaningful mention is Christianity, and it is portrayed in mixed ways. In most cases, Christians seem to be portrayed as weak people who wait for God to act rather than do anything on their own.

The wild west is a violent setting, and the game reflects this with a morality and sense of honor that is not quite what we have today. If someone steals your horse, you shoot him. If you see someone assaulting a lady, no one will blame you for putting a bullet in his head. This is not how the morality of our culture is made anymore, but it is accurate to the setting in which this game takes place (which in itself is a romanticized version of this historic period).

Red Dead Redemption incorporates a morality system. You can either be an outlaw, killing and stealing as you see fit, or you can be an upright man of honor, defending the weak and eliminating those the west would be better off without. As such, there are many choices you can make throughout the game. For example, if there are some outlaws attacking a stagecoach, will you ride by and think nothing of it? Will you kill the outlaws and save the stagecoach? Or will you join in and rob the stagecoach yourself?

Besides the optional choices, there are few story-required missions that enter morally grey areas. John Marsten has to work with some pretty rotten individuals in order to get to the men he is after, and unfortunately that sometimes requires doing things that many will find uncomfortable. In one case, the player must help a particularly creepy and mentally unstable man transport a body that he dug out of a grave, looking for information on a treasure. In a few instances you must help a conman sell his miracle tonics. Within the civil war in Mexico, you must take on a few missions for the corrupt government fighting against the rebels. Situations like this are often morally uncomfortable, though in the most extreme of these cases, those responsible get what is coming to them.

One thing that got to me was that out in the countryside, sometimes the player can find someone crying over a dead body. In some cases, the crying person keels over after a few seconds, but in other cases the person will take a gun to their head and shoot their self. I wanted to help them, to intervene, even if I had to hogtie them to keep them from killing their self, but these optional asides are not an opportunity for the player so much as a display of the wild savagery that characterizes the land and the time period.

I was looking forward to Red Dead Redemption, partially because I liked the idea of exploring a huge chunk of the wild west on an epic quest for redemption, and partially because the multiplayer looked extremely interesting. It allows players to band together and explore the game world, taking on missions from the game or choosing to exit the game world in favor of a more traditional match against other players.

As it turns out, Rockstar delivers a very solid game. It has its share of problems, such as a few glitches and graphics that are obviously a bit much for the console to process at once, but all-in-all it is a solid experience that, were a recommendation based solely on gameplay, I could recommend to almost anyone.

However, Red Dead Redemption also gives a pretty accurate portrayal of what the wild west is imagined to be: violent, savage, and… well, wild. The violence, and the questionable moral code that guides it, is nothing to be shrugged off. The harsh language, sexual references, and a scene that single-handedly earned the “strong sexual content” distinction on the rating all come together to greatly hinder that recommendation. Therefore, my recommendation to parents is that you honor the M rating and leave this game to adults only.