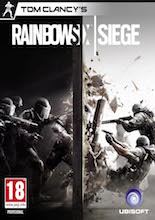 Games bearing Tom Clancy’s name have gone through a number of different phases. Near the beginning of their existence they focused on tactical warfare, but as time went on and games like Call of Duty rose to popularity, they began watering down their signature elements (be they stealth, squad tactics, or whatever) in favor of the run-and-gun twitch shooting that’s ruled the market for the last decade. Siege seems to be their attempt to reconcile the two.

Rainbow Six: Siege is an online multiplayer shooter focused on… well, sieges. All the gametypes put one team in the role of attackers and one in the role of defenders. The exact objectives vary (the defenders can be planting bombs, protecting hostages, or a number of other things), but the basic flow of gameplay focuses around the same process; the defenders put up defenses while the attackers scout the building, then the attackers try to get in and accomplish their mission without being killed by the defending team.

The thing that makes this so different from most shooters is the emphasis on tactics. Players can only die once per round–no respawns. Careless action in this game doesn’t just result in the loss of a few seconds of playtime, it’s a serious blow to your team. To complicate matters, many doors, walls, and ceilings can simply be blown apart, players can scale walls, and each playable character has unique abilities. So success requires careful action and tight teamwork.

I’ll share my impressions of the game in the conclusion, but first we should establish whether the game is appropriate for your children.

Violence:
Being a first-person shooter, especially one that strives to be realistic, there is a lot of killing in this game. Players will shoot other players, kill them with explosives, hit them with the butts of their gun, all sorts of things. As they go, this isn’t too violent a shooter; blood splatters on floors and walls from gunshot wounds, but explosions simply result in ragdoll effects; there is no gore, dismemberment, or graphic violence. Just a whole lot of shooting things and blowing things up.

Language:
The F-word is uncommonly heard in dialogue.

Miscellaneous:
Since players are on opposing teams, one of those teams has to be the bad guys. However, due to the game’s lack of a developed story, it’s hard to really feel like a terrorist; the game never espouses or emphasizes the ideals or reasons behind your faction’s actions, simply places two teams in a setting and lets them fight.

Some levels have drug-related items on tables, but they’re only there for the setting and cannot be used.

A Child’s Perspective: I don’t do this section with M-rated games. A child that plays Call of Duty would likely enjoy this game in some respects, though many children (especially those that grew up with Call of Duty) would likely lack the patience and caution necessary to play it as intended.

Reviewers Thoughts:
I’m not one for multiplayer-only games. I need a good story, some level of artistic worth to really love a game. I only really got Siege because a close family member of mine wanted to play it with me. But as multiplayer shooters go… I’ve enjoyed it a good deal.

It’s certainly not perfect. The amount of content is fairly scant for a $60 game, especially when you consider the abundance of available in-game purchases. A few annoying glitches rear their heads with some of the more advanced movement mechanics, and while the one-life-per-round mechanic adds much-needed tension, it also means more matches end in everyone dying than anyone actually achieving the objective. That said, if their intent was to create a more tactical online shooter experience, they definitely succeeded.

The aforementioned family member I play with is in the military, and playing it with him and his friends is a fascinating experience. The tactics they’ve learned in the Army actually work in this game, and work splendidly; in many games such tactics would be defeated by any random 12-year old to come diving in with a sniper rifle, but this game is made to reward smart tactics and careful teamwork, and it quite effectively makes for an experience fairly unique to today’s multiplayer market.

That said, it’s certainly too violent for young children, while still managing to be notably less so than many other games in its genre. The content is no more offensive, perhaps even less so, than your average Call of Duty game, so if you allow your children to play such military games there’s no reason to hold back on this one.