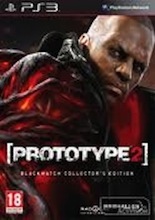 Prototype 2 picks up about one year after the previous game left off. The horrendous Blacklight virus is once again plaguing the denizens of New York City by creating monsters and zombies out of the humans living there, and most believe that the cause of the new outbreak is Alex Mercer, the protagonist from the first game. The military group named “Blackwatch” has instituted martial law to try to curb the spread of the virus while also attempting to help Gentek, the original creators of the virus, perform more deadly experiments with the virus on the city.

The action begins with a number of cut scenes that introduce Sgt. James Heller, the main protagonist of this game. With the new outbreak of the virus, Heller’s wife and child fall victim to it while Heller himself is out of town. He comes back to New York with a penchant for vengeance against Alex Mercer, but in a twist, Mercer selects Heller to become like himself as a viral-enhanced superhuman capable of consuming people, stealing their memories, and shape-shifting into disguises or deadly weapons. Heller, using his new-found abilities, embarks on a quest to discover the truth about who really let loose the Blacklight virus again.

The game of Prototype 2 is so similar to its predecessor that it is very difficult to distinguish between the two. Graphically, the game has had a slight boost in realism, but the main highlight of the game is gliding through the city of New York, seeing the sights and feeling incredibly empowered to do whatever you choose.

As with the previous game, Prototype 2 is very violent, bloody, and gory. Heller has the ability to consume anyone he comes across, which involves killing them and fusing them with himself. When the player is fighting enemies, he/she has multiple options for dispatching bad guys, including picking up military weapons, hijacking tanks or helicopters, and using mutant abilities such as claws, blades, whips, tendrils, or the hammer-fist. Every blow the player makes comes with screams of pain, copious amounts of blood, and at times, decapitation or dismemberment. Also, when certain enemies are killed it will be zoomed in, and in slow motion, so the violent action is accentuated. To be sure, Prototype 2 is a very violent game.

Prototype 2 also comes with a plethora of coarse and crude language. The main character, Sgt. Heller, is perhaps the most crude of all characters in the game, issuing curse words like f**k, s**t, and b***h on many occasions. Other non-playable characters in the game also speak crudely, so much so that it is impossible to complete a single mission in the game where coarse language is not heard in some capacity.

There are no overt sexual encounters in Prototype 2. That being said, there are some dialogue sequences that contain sexual references:

Also, a female character in the game named Sabrina Galloway, wears clothing that exposes some cleavage and also makes weak attempts to seduce Sgt. Heller near the end of the game.

There isn’t a great deal of spiritual content in the game, but there is one particular item of note. One of the main characters in the game is a priest by the name of Father Guerra. He assists Sgt. Heller from his church by supplying him information about Blackwatch operations in the city or Gentek experiments being conducted against the citizens of New York.

There are some mild drug references in the game. When Heller consumes a certain target, he will see a montage of memories where lines of cocaine are being placed on a table.

As a fan of the first game, I did enjoy Prototype 2. Taking the streets of New York with shapeshifting powers that Heller is granted gives the player a truly empowering feeling. That being said, Prototype 2 is essentially Prototype 1, simply with a couple of new characters. Very little has changed from the first game to the second, and the minor variations that have been employed are underwhelming from a creativity standpoint. It is still a fun game, but those looking for an original experience will be quite disappointed. Also, with all of the adverse language and violent content, families should be very cautious before allowing children to play or even view portions of this game.