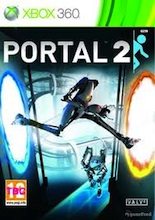 Portal 2 is the sequel to the innovative and revered puzzle game, Portal. The basic gameplay concept around which the series is centered is that the player has a gun that shoots two portals: one blue, one orange. When the player enters one portal, they come out the other. It’s a simple concept, but the first game astounded players with the versatile use of it, particularly the ability to fall a long ways into one portal and use the momentum from the fall to launch themselves out of the other portal. The other main draw to the game was the clever writing and hilarious dark humor. Thankfully, both elements are back in full force for the sequel. Warning: spoilers from the first game follow.

The protagonist, a woman named Chell, wakes up still in captivity at Aperture Science, the organization in which she was undergoing testing in the first game. However, it is revealed that since she defeated GLaDOS (the AI from the first game), many, many years have passed, and the facility has fallen into great disrepair. Unfortunately, once GLaDOS awakens, still upset that Chell killed her before, she runs her through yet more testing with the portal gun. With the help of Wheatley, a rather idiotic little AI sphere, Chell must figure out how to disable GLaDOS once and for all and make her escape.

The game is played from a first-person perspective, and gameplay consists of exploring environments and using portals to navigate them successfully. This includes using portals to redirect light bridges, transport boxes, and avoid various traps, among many other things. New to this sequel are also different types of gel, which allow the player to jump great distances, move at high speeds, or place portals on surfaces on which the player would normally not be able to place them.

Despite being in a first-person perspective and involving a gun, there is no traditional shooting in Portal. The gun is only used to create portals. There are, however, turrets that shoot at the player and traps such as spiky plates and bottomless pits. When the player is shot, there is blood visible on the walls or floor.

There are no supernatural elements in Portal 2.

GLaDOS enjoys insulting Chell, especially since Chell kind of killed her at the end of the first game. These are never inappropriate, are often rude, and are meant for comedy. Here’s an example that typifies GLaDOS’ style: “Well done. Here come the test results: You are a horrible person. I’m serious, that’s what it says: A horrible person. We weren’t even testing for that. Don’t let that ‘horrible person’ thing discourage you. It’s just a data point. If it makes you feel any better, science has now validated your birth mother’s decision to abandon you on a doorstep.”

The game’s sense of humor is generally a dark one, often joking about things like death.

It all depends on the child, for this one. I know some children who love Portal 2 and some who couldn’t handle a game where they weren’t constantly shooting things. Children can certainly love it, but if your child is the type to play nothing other than Call of Duty, their enjoyment of this game could be suspect.

Portal 2 is an outstanding game. The puzzles are well-designed and manage to successfully build on the concepts from the first game while providing a challenge without creating frustration. The writing, as expected, is excellent, and the voice actors deliver the hilarious lines perfectly, making each conversation and announcement an absolute joy to listen to. This is one of those games from which we will all be spewing quotes for years to come.

A great thing about Portal 2 is that it’s actually pretty safe for your child. As long as they can handle some mild language and a bit of dark/rude humor on the part of a malevolent artificial intelligence, they will most likely be all right with this game.