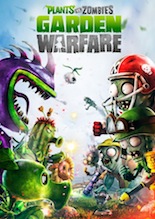 The original Plants vs Zombies was a cute little game developed for mobile devices. In it, the player would play as an army of plants, defending the house (and the owner) from the cartoon zombies. The game was wacky, fun, and appropriate for almost everyone to play. Fans asked for a second game, but it was nowhere near as good as the first. Popcap reevaluated their games, and decided to bring Plants vs Zombies to a whole new level.

Plants vs Zombies: Garden Warfare retains much of the original wackiness of the first game, and may even be more fun. It has lost much of the strategy that was required in the original, in favor of making the game a shooter, but it remains fun, and fairly appropriate for all. Players still can play as plants, although they now control one plant at a time, rather than a whole army. Players may now play as the Zombies as well, who are equipped with things like a Dolphin Shotgun (a Dolphin that shoots fish, instead of bullets), and are bent on destroying the Plants’ garden.

Plants vs Zombies, at its root (pun intended), is about plants shooting zombies, and zombies eating plants. The game is animated, and does not go for “realistic war,” but goes for fun, and “family friendly” instead. When either a plant or zombie dies, they will fall over in a dramatic fashion. There is no blood, and most of the violence is rather cartoony. Plants don’t shoot actual bullets; they shoot things like peas and small thorns. Zombies shoot things like fish, or lasers. One plant can eat zombies, and almost all zombies may eat plants. Popcap made sure that there are no “real guns” in the game. Even things like rocket launchers are used as jetpacks, and “bombs” are really just chili beans. The marketing campaign for this game was “put down the shotgun and pick up a dolphin.” Popcap really wanted a younger audience to be able to play.

None that I could detect.

The engineer zombie has his pants a little low, and has a stereotypical plumbers’ crack.

Nothing specific, other than there are zombies in the game, which are considered undead. The game never addresses how they came back to life.

A Child’s Perspective: My younger cousin had a lot of fun playing this game. Popcap likes to make games for the whole family, and Garden Warfare is no different. It presents a shooter which is fun and silly, rather than realistic and overly violent, like most shooters are today.

I really like this game. Despite it having no story, and is multiplayer only, this is a game I will keep coming back to. It is refreshing playing this instead of the more popular realistic shooters. The game is balanced, is fun, is silly, and shows that people don’t need guns, guts and blood to make a fun shooter.

This seems like the perfect game to introduce a child to shooters or multiplayer games. Though the game has violence in it, it is not over the top at all. I agree with the game’s rating, and would say that it is a fine game for 10 year olds to play.