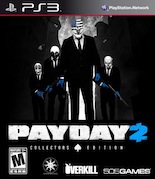 After the success of Payday 1, a modification of an older game, Ubisoft decided to create a full version of Payday. A crime simulator, Payday 2 lets the player take control of one of four characters; each with their own unique personalities, and skills. The goal of these four people is to make as much money as possible, no matter what the cost. There is no epic quest, no question of morals, just crime, plain and simple.

Generic Violence: As expected in a first person shooter, people will be shooting at each other. Unlike other games, however, it is not two armies fighting each other, but robbers shooting at cops and SWAT officers. Players can even kill civilians, but they take a heavy pay cut for “cleaner costs.” The robbers have a large arsenal, so they can use pretty much any type of weapon they want, including various shotguns, assault rifles, SMGs, pistols and unique weapons, like a buzz saw.

Gore: There is blood when someone is shot, and it will often stain the wall behind where they were shot. If players use the buzz saw, there will be more blood than if the person is shot.

Criminal Violence: Civilian hostages can be taken. While usually not harmed, these hostages are vital to the game. They can be used as shields, or can be traded to get one of your teammates back, should they get arrested. All of the missions are based around crime and violence. Missions vary greatly, depending on the job. The player can rob a bank, hold up a chain of stores, shoot up a night club, act as enforcers on a drug run, rob a train, or destroy a mall (as an intimidation mission). In almost every mission, the player will have to shoot cops or local security if they wish to win.

The language in this game varies; there is no set amount. Certain phrases will be used with certain interactions, or with specific missions. The more the player plays, the more they will hear. Every English cuss word is used, along with a few racial slurs and slang language.

The only sexual content in the game is when your boss mentions someone “shagging his sister.”

There is a large amount of drugs in the game, specifically cocaine. Though not expressly shown, the player will often carry around large bags that have the drugs in them.

If my 12-year-old sister is allowed to watch the game, I sometimes use her as an example. However, this game was way too violent for her (by my family’s standards), and contained too much language. If someone underage were to play this, they would have to understand that absolutely everything in the game is wrong, and should not be done in real life.

I’m going to be honest: I felt really dirty playing this game. The entire point of the game is to commit various felonies, like robbing a bank. It’s a power fantasy. There is not a strong storyline, other than “there is a crime organization which will give you missions, so that you can get a lot of money.” Other games like this will occasionally question the morality of the situation, but this game doesn’t do that. It is solely focused on the various crimes the player can commit. Other than crimes, there is nothing special about the game. It is a pretty simple concept.

Usually, M rated games can be stretched a little, so that 15 or 16 year olds could play. Not so with this game; 17 should be the minimum.