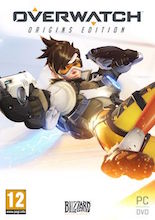 The last decade has seen online multiplayer shooters completely dominate the landscape of video game consumption and development. And it took most of that decade for developers to realize that trying to be another Call of Duty just results in a bunch of low-quality knockoffs and stagnation of the genre. But in recent years, we’re seeing more experimentation with different kinds of multiplayer shooters, from Destiny’s MMO hybrid to Splatoon’s quirky non-violence, and now, to Overwatch’s hero-based team action.

Overwatch has a large, colorful cast of characters who all represent different play styles. The game pits teams of six against each other in objective-based competitions, such as capturing a point on the map or escorting a vehicle from point A to point B. Each of the game’s 21 unique characters has a different weapon, different abilities, and different stats, and each has a role to play in a well-constructed team.

The game is played from a first-person perspective, and players will use weapons ranging from pistols to freeze rays to giant hammers to healing ray guns to ninja stars, to name only a few. It creates a team dynamic like few online games have managed; if everyone plays as the same kind of character, your team is unlikely to succeed. It takes flexibility, coordination, and teamwork to succeed in Overwatch.

Being a shooter, the game obviously has a level of violence. Let’s see if it’s too much for your kid.

The player will be shooting, smashing, and slicing their way through enemies on a regular basis in Overwatch. Attacks are met with small spurts of blood and cries of pain on the part of the one hurt. There is no graphic violence or gore.

None that I’ve heard.

There is some fairly revealing clothing, but it’s mild and the game doesn’t objectify its characters.

Some abilities could be seen as magic, but they’re not explained, and given the sci-fi nature of the game and the fact that many of the characters are robots, it plays into the science fiction rather than any magical implications.

One robot character is modeled based on eastern religions and speaks of Zen and tranquility.

One character smokes a cigar.

As always, Overwatch cannot control what other players say over the chat, so if you’re concerned about what they may hear from other players you may want to use parental controls to restrict their online communication.

I actually played a few rounds with a group of kids, and they seemed to be enjoying the game a lot. They also clearly didn’t have a good grasp on the finer elements of the game, such as having a balanced team and playing your roles to most effectively manage it (despite being higher level than me), which somewhat confirmed my suspicions that children will likely have trouble adjusting to the more nuanced nature of the team-based play of this game, but they enjoyed it.

I’m not really one for multiplayer shooters. I enjoy them with friends, but I’d much sooner take a game with a good story, unique art style, and some interesting new ideas.

That said, Overwatch has seriously harmed my productivity since its release. My wife and I play it together on a regular basis now, and we both enjoy it immensely. Ultimately, Overwatch is one of the best online multiplayer efforts I’ve seen in years, for two major reasons.

Firstly, the team dynamic. The basic gameplay is great, but the varied characters provide a wonderful diversity to the experience, such that you’re always switching the characters you’re playing and learning to play the game in different ways so you can most effectively aid your team in its efforts. There’s genuine variety here; not just which of the 12 similar guns you place in your loadout, but characters that play differently and contribute to the team differently, and it always feels like you’re learning something new.

And secondly, the design and atmosphere. These characters are so creative and colorful in their designs and personalities, and even their play styles lend themselves to their authenticity. This game has more character than most multiplayer games I’ve ever seen, and I get no shortage of joy from the ways these characters express themselves.

And as a nice little bonus, there’s not much here to cause concern for your child. There’s plenty of violence and shooting, which must certainly be considered, but it never gets graphic, there’s no language, and the women dress no more immodestly then the girls at your child’s school. Overwatch is the latest in a nice new trend of excellent online shooters you and your kids may be able to enjoy equally.