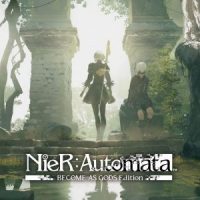 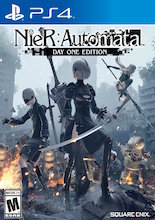 In a distant future, most of humanity has been wiped out. What few remain are living relatively simple lives in small communities, avoiding the ancient ruins and eeking out an existence as the world itself seems to be dying. Remnants of ancient magic can still be found, and strange creatures called Shades encroach further and further on humanity’s few remaining settlements.

Within all this is Nier, an aging man with a daughter who’s contracted a mysterious and uncurable magical disease: The Black Scrawl. But when he comes across an ancient, living tome named Grimoire Weiss, he becomes hopeful that a cure can indeed be found, and journeys across this ruined world to find it.

Nier is a third-person action game with heavy role-playing elements, including a semi-open world and a bunch of different playstyles depending on what weapons and items the player uses. It’s a Japanese game, and it embraces its nature as a Japanese RPG with a convoluted plot, compelling characters, and some unique gameplay sequences that break from the game’s normal formula.

It was released in 2010, but its 2017 sequel, Nier: Automata has drawn heavy acclaim, so this one is worth revisiting. It is also, as noted above, rated M, which means it may not be appropriate for your kids of a certain age. Let’s take a look.

Violence:
Generally speaking, Nier’s violence is fairly tame. The player will use a variety of melee weapons–swords, spears, etc.–to attack enemies. Shades are the most common enemy, and they look like smoke formed into various humanoid shapes; that smoke will often spray from their bodies like blood when attacked. The player will also fight against animals and robots, the former of which die with splatters of blood and the latter of which explode upon destruction.

The cutscenes sometimes include greater violence, such as characters being impaled, stabbed, or crushed. Though there is no graphic gore or dismemberment, there is plenty of blood.

Language:
The F-word, S-word, and lesser profanities (ass, damn, etc.) are used throughout the game. One of the characters repeatedly (and eventually somewhat affectionately) calls another a “hussy.”

Sexual Content:
One character in particular, the foul-mouthed warrior Kaine, is essentially dressed in lingerie. This is representative of how little care she takes for her own life, but is nonetheless rather revealing, and her butt is mostly visible on a regular basis.

Spirituality:
Magic exists in the world of Nier, though its exact nature and how it came to be is largely a mystery. Players will use a variety of magical attacks with the help of Grimoire Weiss, who speaks regularly about the world’s magical artifacts and ancient wonders. A character is introduced later in the game who posesses great magical power, and becomes a companion to Nier for the rest of the game.

Spoiler Warning:
The backstory of Nier is convoluted, but essentially involves humanity making the decision to save itself from this uncurable disease by separating their bodies and spirits and sealing the two away from each other. The central conflict of Nier comes from the two unknowingly clashing as one particular spirit from the human world attemps to reunite with its other half.

Miscellaneous:
While the combative dialogue between Grimoire Weiss and Kaine is often entertaining, it is still defined largely by Kaine’s vitriol and Weiss essentially slutshaming her for her clothing.

Positive Elements:
The story explores a number of positive themes, touching on topics like family, love, sacrifice, grief, and inner strength. Nier regularly sticks with his friends through thick and thin, and his dedication to curing his daughter is admirable. Kaine’s arc is largely about coming to terms with her (somewhat literal) inner demons, and fighting for what’s right even as some part of her wants to cause chaos and destruction. The game as a whole is about coming to terms with grief and imperfection and decay without giving up on everything, and communicates these themes well with a variety of tragic, inspirational, and emotional story beats.

It feels decidedly old school in some ways, harkening back to the action games and platformers of the PS2. Aged gameplay elements like double jumps, save points, and melee combat centered on light/heavy attacks and dodges (before the Arkham series popularized counter-based combat) makes the game feel dated in all the right ways. Add to this the game’s occasional experiments with genre–like the sequence that turns into a top-down action game reminiscent of Diablo, or the dream sequence that turns into a text adventure where the characters are aware that everything only exists as text–and you have a game that feels both nostalgic and undeniably fresh.

Not to say it’s perfect, of course; any game this ambitious will always have its shortcomings. The gameplay can get a little repetitive, the story is occasionally too convoluted for its own good, the sidequests range from legitimately interesting to “why on Earth is this stupid fishing minigame even in this game,” the story takes multiple playthroughs to fully understand, and while I can understand the symbolic reasoning behind Kaine’s design it still feels a little exploitative. But it’s inventive and original in a number of ways, and when you add the excellent voice acting (Grimoire Weiss steals the show) and one of the more beautiful video game soundtracks I’ve ever heard, you get something that’s more than worth playing despite its imperfections.

Of course the story and its presentation are fairly mature, and it would be hard to recommend the game to younger or more sensitive players. Between the mature themes it deals with, some of the bloody violence, and the recurring sexual imagery with Kaine, it’s just not made with kids in mind. Whether you think you or your teenagers can handle it is up to you, but if you decide to give it a shot, you’re in for a one-of-a-kind experience.