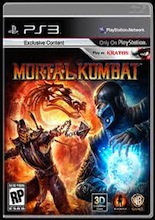 Mortal Kombat (MK) 2011 is a traditional 2D fighter game and the ninth installment in the Mortal Kombat franchise. In this game, as with subsequent installments, players choose a fighter from the extensive cast of Mortal Kombat characters to fight through a tournament of combatants to reach the final enemy, Shao Khan.

Mortal Kombat comes complete with many ways to play. The most engaging is a story mode that takes players through the events of the first three MK games, giving players the opportunity to control multiple characters from the game. Players can also play through traditional ladder matches and online matches, as well as unlock a plethora of hidden material within the game.

As with other 2D fighters, the gameplay focuses on fast-paced, coordinated button pressing to initiate devastating combos and special moves against combatants. As with other MK games, there is a substantial amount of blood and gore, which is accentuated by the now infamous finishing moves known as “fatalities” that players can initiate after they have won the best of 3 matches.

Mortal Kombat is a game that has been known throughout its entire history for its over the top gore and violence, and the most recent rendition lives up to that pedigree. Characters will throw punches and kicks, use weapons like swords and knives, and initiate special moves to inflict damage upon their opponents. Almost all attacks will cause blood to issue forth from the receiving character. Specifically, when a player’s “special” bar is fully charged, they can initiate an “x-ray” attack that, if landed, will show vicious attacks and give an x-ray view of the opponent’s insides as the attacks land. Typically, these attacks show breaking bones, cracking skulls, or specific attacks to internal vital organs.

Finally, when a player wins the best two out of three matches versus an opponent, they will be given the opportunity to initiate a fatality finishing move, which will showcase excessive blood and gore. These fatalities will usually dismember, maim, or decapitate the losing opponent.

Instances of d–m, sh-t, f-ck, and a– can be heard numerous times throughout the game. Also, since there is online play, players can encounter foul language from others that they play with online.

There are numerous instances of spiritual content in Mortal Kombat:

Though it does not directly affect the game, many of the levels where fights take place depict disturbing images of torture or other forms of violence in the background.

Personally, I did find Mortal Kombat to be very engaging with respect to a gameplay standpoint. In terms of gameplay, MK is a game that encourages skill over button mashing, which for an experienced gamer, is a gratifying experience. However, as with all Mortal Kombat games, there are significant concerns pertaining to violence, sex, and spiritual content. As such, parents should make a careful decision when determining if this game is appropriate for their families.