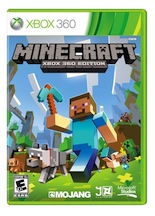 When you first see the game you begin to wonder if you’ve traveled back in time to the dawn of the video game era. The graphics are very simple and pixelated using 3D squares to create huge block worlds. If I had to describe the game simply it would be like playing a virtual Lego set on screen. The sky’s the limit as you can create anything you can imagine from houses, buildings and other structures to fantastic creations and artwork. Playing in Survival mode will have you foraging for food and supplies to create shelter from the creatures that roam around at night fall. You’re either mining for minerals by breaking blocks or you’re building something by placing blocks. In Multiplayer there is some interaction with other players who are also building and breaking blocks.

You’ll be able to hunt down and kill cows, chickens, pigs and other animals to get the food you need to survive. You also end up fighting zombies, skeletons, spiders and other monsters with swords, bows and other weapons you create. This all sounds pretty graphic for any normal game these days with high definition graphics but with this game, and it’s throw back simple graphics, it’s really harmless. There is no blood and no gore. The creatures simple vanish when destroyed.

None. However, some language can be heard from other players in Multiplayer if you allow that mode.

I really enjoy playing this game and it’s fun to play with my kids who really get into it and get so excited about their creations. I only allow my children to play in offline mode only and I regulate the time spent on this game as I’ve noticed they’re moods change after playing for too long. It’s an addictive game for sure in the sense that it’s a lot of fun and your mind can get lost in your creations.

There is a creature in the game called a “creeper” which just looks like a green rectangle with eyes. It’s no big deal other than the fact that my kids were constantly talking about “creepers” at one point until my wife and I banned the use of that word… it just doesn’t sound good. “This creeper was chasing me” or “I killed a creeper!”

Also, stay away from the endless YouTube videos that exist out there for Minecraft. Most of them are garbage or contain inappropriate language.

Finally, I find it to be a harmless game that stimulates good creativity and problem solving skills. I would just limit the time, which goes for any media intake.