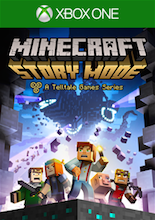 I shouldn’t need to introduce Minecraft. When it started, it was a little project coded by one guy in the rather limited Javascript programming language. He released it to the public, updated it regularly, and before long he was a millionaire who changed the landscape of indie game development forever.

Once the procedurally-generated open world exploration/building game hit shelves with an official release, it found a surprising, but fitting, audience with children. They could build whatever they wanted, or explore faraway lands that only they would ever see (since the game randomly generates a world whenever you start anew), or discover deep caves filled with dangerous monsters. Its retro art style brought pixel art into the consciousnesses of a new generation, to the point where I’ve had children see my pixel tie and assume it’s related to Minecraft, as though they don’t even realize that all video games once looked like that.

Into this cultural landmark, Telltale has stepped in to provide a different kind of Minecraft adventure. The game has inspired books, short films, tribute songs, and now its own story-based video game. Minecraft: Story Mode aims to take the familiar setting of Minecraft and use it to tell a story, something notably absent in the original game. The game fits Telltale’s usual M.O., with a cinematic presentation, developed characters, and a number of dialogue choices the player can make to change how the story progresses, in addition to some new elements to more closely adhere to the spirit of Minecraft.

So before we look at how well it did, let’s see how it fares for your children.

Violence:
In occasional sequences the player will use a very simple system to attack monsters with swords, and they disappear in a poof of smoke when defeated. Another sequence centers around a city of “griefers” (Minecraft terminology for players who purposefully mess up other peoples’ creations), where everyone throws dynamite at one another. The plot involves a monster that destroys whole cities, and while death is never explicitly seen or discussed, it’s clearly implied that the death toll is high. There is some violence between human characters, but as of the first two episodes no one kills another person.

Considering the pixelated, retro-style artwork of the game, it’s not at all disturbing or graphic. You can die, but true to the Minecraft aesthetic it’s very mild (usually consisting of no more than your character turning red and falling over). At one point, you can choose to punch another character in the face.

Language:
One character says “What the Hell” at one point in the story. Minor slang such as “screw this,” “holy crap,” and “what a jerkwad” are also said. When an explosive called the “formidibomb” is mentioned, it’s referred to as “the f-bomb” for laughs.

Due to the choice-based nature of the game, I have not heard every line of dialogue that could be said, but given the PG-rated kids adventure vibe and the E10 rating, it’s reasonable to conclude that the language won’t get worse than this.

Spirituality:
Minecraft includes brewing potions and enchanting items, both of which are mentioned but not actually done in this first episode. A man creates a monster out of a variety of elements.

Miscellaneous:
As with all Telltale games, Minecraft: Story Mode allows the player to make important choices that impact the story and characters. This means there is some opportunity for the player to make poor decisions (i.e. stealing, punching someone, leaving a friend behind), but equal opportunity for good ones as well (i.e. not doing any of the previously mentioned things). Their actions have consequences either way. Though one character does steal something even if you tell him not to, but the consequences catch up to him (and basically the whole world) quite quickly.

A Child’s Perspective: I unfortunately don’t have easy access to child-testers since I moved, but I fully expect a kid who already loves Minecraft will enjoy this as well, so long as you make it clear that it’s a different experience and they can read well enough to know what decisions they’re making.

Reviewers Thoughts:
When Minecraft: Story Mode was announced, it was met with general confusion. Minecraft is a game with no story, choosing instead to focus on allowing the player complete freedom within a nearly-infinite and completely unique world. I’m still not entirely sure where the confusion came from; it’s a spin-off, a new and different work based on the setting and spirit of the game. And I also hoped we might finally see a great video game story aimed at children.

Based on the first two episodes (with the others on their way), they haven’t disappointed in any regard. Telltale is one of the best in the business at crafting compelling interactive stories, and the world of Minecraft is rife with potential. The result thus far is an entertaining adventure with a great cast of characters.

But what really makes Story Mode stand out is its target audience. Telltale’s greatest work thus far has been with decidedly adult-oriented material, such as their exceptional Walking Dead series and their ongoing Game of Thrones story. But Minecraft: Story Mode has the distinct feel of one of those adventurous PG-rated kids films my generation grew up with; the group of kids, in over their heads and trying to keep things together in a situation that will require them to grow up a bit. It’s a little more frantic and silly than Telltale’s more adult-oriented fare, but it’s enjoyable, and when they do slow down and allow some character moments, there’s some excellent stuff here.

What little offensive content is here is all mild enough that there’s little reason to bar entry to any kid who can play Minecraft in the first place. If you want something you could talk about, that provides the same kinds of “teachable moments” as a good kids’ film or show, this game is more than worth it. Time will tell if future episodes keep up such a standard (and we’ll keep the reviews coming as they release), but I see little reason to doubt.