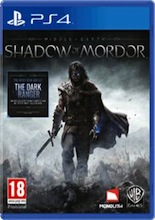 Middle-Earth: Shadow of Mordor’s story takes place between the events of The Hobbit, and The Fellowship of the Ring movies/books. After Bilbo found The Ring, but before Sauron (the main antagonist) manifests himself in his tower, there was a time of very uneasy peace. During this time, the land of Mordor was taken over by orcs, who began to steal land from Gondor, one of the biggest kingdoms. The player plays as a Ranger of Gondor, stationed on a giant wall between Mordor and Gondor. The game begins with an attack on the wall, and afterwards, the protagonist and his new elf spirit will go out and explore Mordor, in order to both put a stop to the orcs, and more of Sauron’s evil, and discover why they “survived” the attack.

Shadow of Mordor is an open-world game, meaning that the player is free to explore the world as they choose. Shadow of Mordor has quite a lot to explore, and is filled with side-quests, hunting and gathering missions, and collectibles. Players will often have to fight, and there are no shortage of enemies to kill. Orcs can be dispatched with a stealthy approach, and ranged attacking style, or a full frontal sword assault. Smart players will use their environment to their advantage, and will create traps, lure over wild animals, or will make things explode. There is quite a variety of gameplay styles, and all of them are blended together to be really fun.

Blood and violence are prevalent in Shadow of Mordor. It is a realistic third-person action game, and the player can use a sword, dagger, and bow. Decapitations, stabbings, and other such violence is common place. When an enemy is stabbed or slashed at, blood will spout from them, and when there is a decapitation, the blood splatter is more akin to an eruption.

The goriest example I can give comes from a cutscene, where three throats are cut, and you can clearly see the blood pour out of them.

The most brutal example I can give comes from gameplay, and can be done as often as the player wants. When the player sneaks up on an orc, they have an option to perform a “brutality,” to frighten away the other orcs. During the brutality, the player will stab and slash an orc roughly ten times in rough, quick, and brutal succession.

The violence is almost entirely directed at orcs, and not done without reason (there are two instances when the player will kill an evil human). The player’s overall objective is to discover what is happening in Mordor, and during that process, they try to stop the growing shadow, which means killing lots of orcs in the process. The orcs are attacking humans, enslaving and beating them (the player will have many opportunities to liberate slaves), and are capturing the area in which the player spends the majority of the game.

A few minor swear words are used, like “d**n,” are used infrequently. The enemies mostly use Orcish insults, like “Tark,” which have no real meaning to Humans outside of the game.

There is no sexual content in Shadow of Mordor.

Tolkien, the creator of The Lord of the Rings, used quite a lot of symbolism for Christianity, and spirituality in his books. That spirituality bleeds into the game, even if it is not as prevalent as in the books.

Warning: Minor Spoilers
Sauron, the main antagonist in the books and movies, and the symbolic Devil is the driving evil behind the story in Shadow of Mordor. It is revealed that he manifested himself as an elf, and used trickery and deception to get an elf lord to do his bidding (much like how the Bible says the Devil operates).

There is some aspect of possession and what I guess could be called Necromancy are in the game. At the beginning of the game, the protagonist’s family is slaughtered in a “blood sacrifice” (a henchman casually slicing open the throats of the player, and his son and wife, whispering “an offering of blood and bone”) in order to summon the spirit of the aforementioned elf lord, who ends up manifesting himself (and sharing a body with) the main player. I will say that the ordeal was handled well though. It didn’t really seem like a ritual, and didn’t seem out of place in The Lord of the Rings universe. It did seem like murder, but it didn’t seem that different from the Ghost Army in the third book/movie.

There are some minor scary images in the game. When the player reads the mind of an orc, they will do so through the elf lord spirit. The spirit gains access to the mind through intimidation, and his ghostly face will manifest in a near-skeletal form in order to terrify his current victim.

A Child’s Perspective: This is not supposed to be a family friendly game, and as such, no children were around when I played it.

When Shadow of Mordor was announced, reviewers and critics quickly drew the conclusion that this game had quite a few gameplay similarities with the Assassin’s Creed series, and the Batman Arkham series. In fact, most early complaints were that Shadow of Mordor just had copied mechanics of the other games. When the game was released, it was true that Shadows did heavily borrow from Assassin’s Creed and Batman, but it blended the mechanics beautify, and added plenty of its own. I love using a sword along with Batman’s fighting style in combat, while using the Assassins’ free running skills in the open-world. I think that it is a really fun game to play.

The story is a tad short, but will heavily appeal to hardcore Lord of the Rings fans. Even if you aren’t a fan of Lord of the Rings, the story is contained enough that players will still be able to enjoy a coherent 3-act story. As I said before, the story is short, but that doesn’t mean that players will be able to get through it quickly. Shadow of Mordor introduces what they call a Nemesis System, an enemy encounter system designed to remember, adapt, and change to the player. The system is heavily prevalent throughout the entire game, and most missions involve it or are based around it somehow. What I like the best about it is that the more you fail against the system, the harder it gets, and it is completely your fault. Eventually it will get so hard, conventional and non-conventional play styles will fail. The player will have to change their strategy, find a weakness to their enemy, find the enemy when they are weak, and finally strike once they have exploited the weakness. Shadow of Mordor rewards skill, but even more, it requires thinking. It is a beautiful blend, and something I rarely seen done so well.

Shadow of Mordor is rated M, but I personally think that if you allow your child to watch The Lord of the Rings movies, they would be okay to play this game. There is much more blood than in the movies, but it is about the same level of violence.