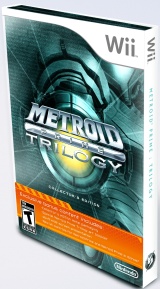 When I picked up “Metroid Prime 3: Corruption” for the Wii a while back, the thought crossed my mind that the original two Metroid Prime games would have been even more incredible with the Wii control scheme. Being able to aim at whatever I wanted to on the screen was much simpler than trying to use the Gamecube controller for fine-tuned situations (in my opinion). Apparently, enough other people felt the same way so Nintendo and Retro Studios decided to release a special edition of the Metroid Prime trilogy for the Wii, complete with Wii controls and widescreen capabilities for all three games.

The Metroid Prime series begins with the first game, simply titled “Metroid Prime.” Samus Aran, a highly skilled and heavily armed intergalactic bounty hunter, is tasked with investigating the activities of a race known as the Space Pirates in the Tallon system. Samus discovers that the Space Pirates have begun experimentation with a mutagen they call Phazon. This Phazon has the capacity to transform even the most docile creatures into dangerous killing machines. Samus sets out to destroy the Space Pirate’s operations and stop the use of Phazon.

In the second installment of the series, “Metroid Prime 2: Echoes,” Samus is summoned to determine what happened to a detachment of Space Marines on the planet Aether. After crash landing on the planet, she discovers that the missing Marines have been killed by simple parasitic creatures that somehow overwhelmed them. She also runs into her evil twin, dubbed “Dark Samus,” who initially bests Samus and leaves her without many of her suit’s functions. As if that is not enough, Samus stumbles into the middle of a civil war between the planet’s native Luminoth and a dark species known as the Ing. Samus also discovers that the Space Pirates have set up more Phazon operations, going so far as to use Phazon on themselves. Samus must help the Luminoth defeat the Ing, stop the Space Pirates, and defeat her evil doppelganger.

In the final game, “Metroid Prime 3: Corruption,” Samus and three other bounty hunters are tasked with eliminating a computer virus that has spread to several supercomputers. Before she can begin her quest, she must stop a Phazon asteroid from colliding with a nearby human planet. As she defends the planet, she confronts Dark Samus again. As a result of this fight, Samus begins to be able to produce Phazon on her own, which she can use to her advantage. The only problem is that this Phazon also has the capacity to completely corrupt her and transform her into another Dark Samus. She also learns that her fellow bounty hunters were sent out earlier and have been out of contact for some time. Samus must complete her original quest, fight Space Pirates, and fight the ultimate source of the nefarious Phazon.

All three games are played the same way. Players move Samus around the various planets, using her suit’s functions to blast enemies, solve puzzles, and traverse great distances. As players progress, they unlock more of Samus’ capabilities, open up new areas to explore, and discover more difficult opponents. One of the features unique to the Metroid Prime series is that Samus can scan creatures and computers to record descriptions of enemies and lore from the surrounding cultures. As Samus scans more lore, players unlock more of the game’s features, such as concept artwork.

Much of the game involves Samus using her suit’s weapons to defeat her enemies. Samus’ weapons include her standard charge beam, missiles, mines, a plasma beam that toasts enemies, a freeze beam that can turn enemies into ice, an electric beam that can zap enemies, light and dark beams, and some other goodies that combine some of the aforementioned weapons. The baddies that Samus destroys range from mechanical creations to giant animals to the humanoid Space Pirates. Most enemies will simply keel over or blow up when defeated. Anything that is left vanishes. Some biological enemies spurt a little bit of blood on occasion. If Samus is defeated, you hear her scream and her heart monitor goes flat line.

There is no foul language in the games.

The only thing to note here is that in some very brief parts of the games, you get to see Samus in her “zero suit,” a form-fitting jumpsuit Samus wears when she is out of her Power Suit.

Some of the alien races Samus encounters have their own fictional spiritual beliefs that are revealed in bits and pieces through the scans Samus completes. The most prominent of these races, the Chozo, apparently transcended from being physical to being ethereal. The game’s namesake, Metroids, are creatures that are capable of sucking the “life force” from a creature in order to survive. It is never specified what this life force is and where it comes from.

These Metroid games were incredible when they were released. They have great stories, excellent gameplay, and worlds rich in detail. These games are even more enjoyable with the new controls and widescreen capability. If you enjoyed all of these games or missed an installment someplace, this trilogy is definitely for you. The Metroid Prime series is also a good action game that has little content for parents to be concerned about. If you like action mixed with some puzzles and exploring, then the Metroid Prime series is a good game for anyone teen and up.