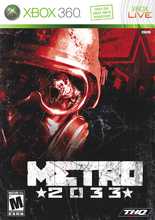 Metro 2033 is based off of a Russian novel of the same name. The game takes place in post-apocalyptic Moscow, where nuclear war has ravaged the city and mutated many dangerous creatures. The survivors have taken shelter in the Metro stations and railways, and are now living underground where the air is not contaminated. Constantly defending themselves from the mutated creatures that lurk in the world above and the tunnels below (as well as the Nazi and Communist armies fighting for dominance over the remaining humans), things look quite bleak. However, a man named Artyom is given an important message to deliver, one that could save his home station and possibly the entire Metro.

Metro 2033 mixes shooter and horror elements with survival. Most of the game is spent fighting either monsters or armies of humans from the first-person perspective with a variety of weapons; though with the latter there is almost always the option of stealth. But this is complicated by the fact that, when above ground, the air is contaminated. The player must wear a mask with air filters, which must be changed every ten minutes or so. As the player takes damage the mask can eventually break, leaving the player to eventually die of exposure unless they quickly find another one. The interesting combination of survival elements and shooting gameplay, coupled with the tense and desolate atmosphere, makes this game quite impressive.

The story told is a deep and mature one, and the game does not dumb it down in any way, thus the “M” rating.

From a first-person perspective, the player will use a variety of weapons including guns, crossbows and knives to fight off the creatures that roam and hunt in the ruined world of post-apocalyptic Moscow. The player must also sometimes kill humans, usually in the context of the battle between the Nazis and the Communists, fighting for control over the Metro and those who live in it. Splashes and sprays of blood occur when an enemy is shot, including blood spraying on the walls or getting on your visor. Also, the viciousness of the animalistic mutants gives the game a visceral feel.

The most disturbing violence comes in the form of the bodies the player will sometimes encounter. Now and again the player will come across a dead body that, if examined closely, has obviously been ravaged and partially eaten. Some organs can be seen.

The words f**k, s**t and d**n are used throughout the game as well as other more mild language that is also used frequently.

There is a station in the metro in which the player may encounter a promiscuously dressed woman whose dialogue is laced with sexual innuendo. The player can give her money and follow her to a room, but upon arrival a man knocks the player unconscious. The player wakes up with no money.

There are many spiritual elements in the game, but they are never fully explained. There are ghosts and spiritual presences throughout the metro, which the player occasionally encounters.

The player can, in one station, encounter a drug dealer who offers dope. The player can then inhale drugs, which causes dizziness, blurred vision, and even vomiting in the character.

Metro 2033 is one of the most immersive and atmospheric games since the first Bioshock. The dark, mysterious tunnels lend a claustrophobic and tense feel to the game. The surface is haunting, desolate, and disturbingly silent save for the occasional cry of a vicious mutant. The intensity is only increased by the constant awareness of the air filter and the knowledge that failure to change it will fog the visor and impair visibility. Small touches, such as the filter meter being on the character’s watch and the way cracks appear on the visor as it takes damage makes for an intense and immersive experience throughout. The subtle way in which the moral choice system exists is intriguing, though its inconspicuousness may cause the player to completely miss its existence the first time through. The game truly is an underrated piece of work.

Still, Metro 2033 is rated M for good reason and parents should consider the above mentioned content when deciding if Metro 2033 is an appropriate game for their family or not.