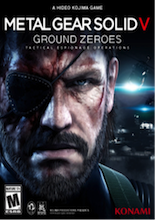 I’ve been a real fan of spy games ever since Spy Fox when I was a little kid, and
Tom Clancy’s Splinter Cell is definitely my all time favorite to this day.
Goldeneye 007 may be the granddaddy of spy games, but Metal Gear Solid is the father of stealth-based spy games, which Splinter Cell certainly borrowed from.

For those who aren’t familiar with Metal Gear Solid, the games have the protagonist named Snake (in Metal Gear Solid 1-4, he’s known as Solid Snake, and in Peace Walker and Ground Zeroes he’s known as Big Boss), who’s constantly fighting corporations and governments trying to start global war, even fighting his own country in some cases. Ground Zeroes serves as a sequel to Peace Walker and a prequel to the upcoming installment The Phantom Pain. Ground Zeroes takes place a few months after the events of Peace Walker, where Snake infiltrates a former refugee camp turned American prison camp (reminiscent of Guantanamo Bay) with orders to rescue a woman and kid, Paz and Chico, from the hands of Skullface, a man whose face has been burned off leaving only his skull, and the leader of the paramilitary corporation, XOF and commander of the black site.

Since the black site is on Cuban soil and is under no protection from the U.S Constitution, it is notorious for secretly sanctioning acts like torture and rape during interrogations. Snake is free to accomplish his goals with whatever means necessary, which raises some controversy, as Snake’s enemies might well be American.

(Note: This review is based on partial play, and may not include details from side missions)

Stealth is preferred in this game, but violent and non-violent options are at your disposal. Essentially, the more alerts, the more kills, the lesser your score is. If an enemy spots you, a button prompt to target him pops up, and you can shoot him. However, if your weapon is unsupressed or a body is found, enemies will be on alert and you can either kill them or wait until they give up looking for you. When Snake is finished interrogating an enemy he can either incapacitate him or kill him with his knife, blood spurts when choosing the latter. Enemies spurt blood on the environment upon death, and bleed out on the ground. In some cases, you can kill an enemy in slow motion, blood shown. You can carry their corpses to dark areas to maintain your stealth. Head shots spurt more blood. When shot, the screen is splattered with blood, and the colors are tinted red.

One extremely disturbing and graphic cutscene near the end has a medic attempting to remove an explosive from a woman’s abdomen. We see him cut open the sutures and plunge his hands into her intestines (shown). She wakes up during procedure and starts thrashing around, Snake and Chico attempt to hold her down. The bomb is removed, but another remains inside of her. The victim throws herself out of the chopper before it detonates.

The ending cutscene involves a firefight between Snake and the mercenaries. One of his allies is shot, blood sprays on the screen. In one tape recordings, Skullface tells a dying prisoner of how when he was a boy, his hometown was bombed, and he tells of the smoke of them burning filling him up. His skin was burned in the bombing, and burned again in torture. He tells him all this before killing him.

When shot, enemies will keel over in agony, and you can either put them out of their misery or let them be.

Chico pulls out what looks like a headphone jack out of his chest and plugs it into a cassette player. Snake finds the kid’s ankles mutilated with bolts to keep him from walking. Paz is found wearing blood stained clothes, as she’s chained to a pipe. In some of the tapes you find, Chico and Paz are beaten mercilessly, sounds of whipping and beating can be heard.

Infrequent uses of f**k, s**t, and frequent lesser profanity. I’m not aware of any strong language in the main mission that I know of, so it’s probably heard in the Side Ops missions or some of the cassette tapes.

This is where the game gets really dark and disturbing.

Spoilers: While nothing is shown, some tapes can be found which tell the player what happened with Chico and Paz at the hands of Skullface. One tape or two implies Chico was forced to rape Paz, sounds of clothing being ripped and sexual moaning can be heard. (End Spoilers)

Skullface makes some sexual comments to Chico in one tape. A female prisoner’s midriff is shown as a medic prepares to remove a bomb from her stomach. Another bomb remains inside of her, which could possibly be inside her nether regions.

In the backstory, one quote from Paz says, “This place will no longer be my ‘heaven.'” In one cassette tape, Skullface interrogates a prisoner, asking him if education, morals, or faith keeps him going then tells him he’s face to face with oblivion, and yet he still thinks help is coming.

In one mission, after you take out one of two suspects, Kaz says, “He’s on his way to Hell, don’t let him travel alone.”

Part of Snake’s backstory mentions how a certain incident caused him to leave the military and become a soldier for hire. It also talks about how he was forced to kill his mentor and the woman he loved as part of a mission, which haunts him still.

In one mission, you can choose to extract some prisoners for intel. Snake smokes a cigar in the Main Menu.

This game, like the rest of the Metal Gear games, is very critical of war, the motives of governments, and especially soldiers and private military companies. One might suspect this game to be vaguely anti-American, since enemies are dressed in American uniforms, the American flag flying at the base, and the fact that Americans are involved with XOF’s plans. Snake sometimes uses morally gray methods to accomplish his objectives. One side mission requires Snake to kill two former U.S. Marines gone rogue; men responsible for a lot of war crimes.

A Child’s Perspective: Almost all of the Metal Gear Games are aimed at older teens and/or adults only, and this one is no different. Due to the violence, sexuality, language, disturbing themes, and morally gray choices, I cannot recommend this game to kids or teens.

While the game was fairly entertaining to a point, the atrocities and graphic violence committed in the game are not something to be taken lightly, not even for entertainment. The creator of the series, Hideo Kojima, claimed that he anticipated negative feedback on the controversy surrounding the implied torture and rape of Paz, but didn’t want to cut them out, as he felt that games couldn’t be “considered a part of culture without featuring socially unacceptable aspects.”

If you are a fan of previous Metal Gear Solid games and spy warfare, this game probably won’t disappoint you terribly, save for its intolerably short story, which renders this game more like a demo than a true game. If you think you’re mature enough to play Ground Zeroes, I recommend sticking to renting it or waiting until it drops below $10 to buy it, if you must.