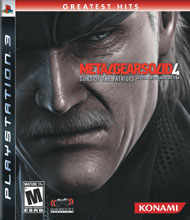 I want to start off by saying that as a gamer and even more so as a huge fan of the Metal Gear Solid games that Metal Gear Solid 4 is everything I was hoping for and more. The game plays very well, the graphics look very realistic and if you have been following the story over the last 3 MGS games then you will be happy to find out that most of the questions raised from the story in the first 3 games are answered and concluded rather nicely.

Now with that said, I want to say that as great of a game as I think Metal Gear Solid 4 is, I also need to point out that Metal Gear Solid 4 is rated M and with good reason, which means that this is not a game for children. Now because of my respect of the game I am going to try and keep this as spoiler free as possible, but be warned that in order for me to help parents know the content of this game that there might be some spoilers ahead. So read at your own risk.

For those of you who are not familiar with the Metal Gear Solid games, the reason I speak of spoilers is because as with the past MGS games Metal Gear Solid 4 is more than just a video game. It is actually one part video game, one part war movie. Now I did not sit there with my timer, but many of the articles that I read about MGS 4 said that the game is 50% game, 50% movie and since it took me almost 20 hours to complete the game that means for close to 10 hours I was just watching cut-scenes.

So let me begin with the story. If you are a parent and you know very little about the Metal Gear Solid franchise then all you really need to know is that in Metal Gear Solid 4 the entire world is at war and armies are now run by private military corporations (PMCs) that work for the highest bidder. You play the role of an old soldier named Solid Snake who is called into action for one last mission to stop a man who goes by the code-name Liquid Ocelot. Liquid Ocelot has control of five of these PMCs and he is trying to gain total control over the war industry and economy. Of course, this is just the surface of the story, but basically what you get in Metal Gear Solid 4 is a brilliantly told war story with a very strong anti-war message.

As for game-play, Metal Gear Solid 4 is still very much a stealth game. Yes, it is possible to go in guns-a-blazing, but in my opinion stealth is really the way to go. You are actually rewarded in this game for the less kills you make as opposed to the more you make. There are also some brilliant and challenging boss battles. In addition, there is also an online game mode where you can battle with your friends.

Again, I want to say that I found Metal Gear Solid 4 to be a brilliant game, but the game is rated M and not designed for children. Listed below are some things that parents should take into consideration when deciding if Metal Gear Solid 4 is right for their family or not.

(Warning: The following may contain spoilers to the story.)

As in past Metal Gear Solid games, the name of the game is still stealth. It is actually encouraged to try and get to your objective without killing anyone. This is a war, however, so killing your enemy is an available option. Some bosses will also die anyway at the end of a battle even if non-lethal methods are used. There is also a large amount of blood, but there is the option to turn the blood off. I played with the blood turned off, which made it feel very much like I was playing a T rated game when it came to the violence category.

The bad language was not over the top, but it did feel like I was watching a PG-13 war movie. I heard the f-word used one time, the s-word used a handful times and other swear words that you would hear in prime time TV a number of times.

Some of the female bosses wear skintight outfits where all the right parts have some jiggle. There is also a female character whose outfit shows off a lot of cleavage.

It is also possible to purchase Playboy magazines that you can drop to distract enemy soldiers. The pictures in these magazines that can be seen, however, are small and the women are not nude. It looks more like something you would see in the Sports Illustrated Swimsuit issue.

There is one boss named Screaming Mantis who supposedly is a psychic. She appears to have the ability to control the actions of other soldiers. You later discover that what she is really doing is controlling nano-machines inside the soldier’s body which makes her appear to have psychic abilities.

Also, in a comical scene, Snake has an encounter with a ghost from his past.

As in past Metal Gear Solid game, MGS 4 really makes you examine the morality and ethics of war. Ironically, there is even a comment in the game about how First Person Shooter video games are raising up a generation of kids to feel immune to the effects of war.

As a gamer, I cannot say enough good things about Metal Gear Solid 4. As a parent, however, it is in my opinion that Metal Gear Solid 4 should only be played by older audiences. As I said in the violence section, if you turn the blood off then the game plays very much like a T rated game. The language, however, cannot be filtered and this is something parents need to decide if they want their kids listening to or not.