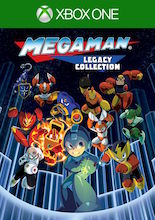 Mega Man is such a classic series, I don’t even really know where to begin.

Back in the days of the original Nintendo, the little blue robot premiered with unique action gameplay, and the follow-up provided video games with some of the most beloved music of that generation. Mega Man is an icon of early gaming, an excellent example of old-school action gaming that’s unfortunately been largely abandoned in recent years. But, not one to give up entirely on popular franchises, Capcom released the Mega Man Legacy Collection, consisting of the first six games in the series.

So of course, all these games have been available for some time, but since the original Nintendo system is hard to get a hold of, such re-releases make it far easier to experience such classics.

All the games are side-scrolling action games, meaning it’s all two-dimensional, and the player mostly moves up or to the right. Mega Man has a laser cannon for an arm, and the player must jump and shoot their way through some rather difficult levels in order to destroy Dr. Wily’s evil robot henchmen.

Being such early games, you’d probably expect they’d be pretty simple, and not have much negative content. Aaaaaand you’d be right, but let’s take a look before you catch your kids up on the classics.

Mega Man has a great variety of enemies to shoot his way through, all of which are robots of one kind or another. Due to this, as well as the game’s age, death is never graphic at all. When Mega Man himself dies, he just explodes into blue lights.

There are barely any words in these games, let alone offensive ones.

Mega Man is all about robots, so no magic involved.

A Child’s Perspective: Mega Man captured the imaginations of countless children when these games originally released. Now, the old graphics and relatively simple gameplay may turn some off, but it’s absolutely worth trying. The games are still well-designed, very fun, and difficult enough to deserve children’s attention and determination for a good long while.

Believe it or not, I haven’t played much Mega Man, so this collection was essentially my entry point into the series. And as entry points go, it’s not bad at all.

Obviously the games are rather old, but good game design transcends powerful technology, and the games hold up rather well. The simplicity of the game mechanics can make the gameplay feel rather dated at times, but the enemies are creative, the platforming is challenging, and this collection adds the ability to save and load your game at any point, making for a relatively forgiving experience compared to the original game. And of course, Mega Man music is still among the best of 8-bit game soundtracks.

As for your kids, the Legacy Collection is an opportunity to show them a bit of gaming history, and exceptionally kid-friendly game history to boot. You could certainly do worse than adding this collection to your kid’s… well, collection.