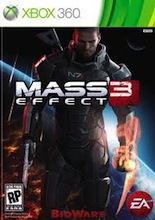 One of my favorite game series to be released this generation has been the Mass Effect series. Mass Effect 3 is the conclusion to this trilogy of games. Once again you play as Commander Shepard. This time the Reapers have attacked Earth and you must set out to gather help and resources from across the galaxy. This will not be an easy task though. The only way to defeat the Reapers is to help alien races resolve old conflicts and unite old enemies to take on this new enemy that not only threatens Earth but every advanced alien race across the galaxy. Plus, in addition to the Reaper threat, there is a rogue human group named Cerberus that appears to be bent on stopping Commander Shepard from completing his mission.

Mass Effect 3 is played from a third person point of view. Part of the game involves RPG elements such as talking to people to advance the story. You will have multiple conversation choices that will help to determine the direction in which certain elements of the story will go. The majority of the game, however, is an action game where you will control Shepard along with the help of two squad mates to complete missions. The majority of these missions include fighting enemies with an assortment of guns, grenades, and biotic weapons.

There is also a multiplayer option in which players can complete missions along with other people over Xbox Live or the Playstation Network. The multiplayer missions, however, are not required for completing the main game and the multiplayer content is not covered in this review.

Reviewer’s Note: In many ways Mass Effect 3 is very much like a Choose Your Own Adventure book in that how the story progresses is based on the decisions that you make throughout the game, and even decisions you have made in past Mass Effect games (your saved files can carry over from each game if played on the same system). As such, it would take multiple playthroughs to cover everything in the game. This review is based on my one time playthrough of Mass Effect 3.

What Parents Need to Know (Warning: May contain Story Spoilers)

Mass Effect 3 is primarily a third person shooter. The player can use different types of guns such as pistols, shotguns, assault rifles, and sniper rifles.

There are also different types of ammo. For example, some ammo is better for penetrating armor, some ammo will ignite enemies into flames, and other ammo will freeze enemies.

Players can also use grenades, and biotic abilities such as lifting enemies into the air.

Mass Effect 3 is certainly not the bloodiest M rated game I have ever seen, but there is a fair amount of blood. For example, the player can use a sniper rifle and if you get a head shot on your enemy, the head will explode and some blood will splatter. You can also do melee attacks, one which allows you to stomp the head of an enemy called a Husk with your boot.

The characters in Mass Effect 3 use a number of colorful terms, mostly but not limited to the words s**t, hell, and dammit. I counted 4 times where I heard the word F**k, and the name of God was used in vain a handful of times as well.

There is some sexual banter that occurs between characters.

You can enter a dance club where there are some exotic dancers dressed seductively. Some female characters outfits are very tight or show lots of cleavage.

There is a character named Jack that wears a top that outlines her nipples.

There is one particular version of the enemy Reapers that have exposed breasts; however it is a very monstrous looking creature so it is hard to think of her breasts as seductive. In fact, I would be concerned if anyone did find it attractive.

If you pursue a romantic relationship in the game, it is possible to have a short sex scene in one part of the story. The scene I experienced was very quick and not too graphic, but there was some side breast shown.

During one mission, a character mentions that she believes in religious freedom for all galactic species, but that the spiritual beliefs of the person they were pursuing she found to be crazy.

One alien character in the story is a female Krogan named Eve. She is the key to helping the Krogan race become fertile again. She is a Shaman and dresses as such. Because she is helping her race to become fertile again, she was given the name Eve after what the story referred to as human mythology.

One mission takes place at a monastery. Another mission takes place in a temple filled with religious artifacts and manuscripts of an alien race called the Asari. If you point to certain items, the Asari character in your party will give you a short history lesson about the artifact and how it relates to their religion. The Asari also make many references in the game to their goddess.

There are references in the story to self-aware AI (artificial intelligence), where life was created by man or other alien beings.

Towards the last mission Commander Shepard and his friend Garrus talk about heaven and meeting up at a bar in heaven if they both die. This was actually a touching scene that I felt showed the strength of their friendship.

Without trying to give away too much of the ending, the ending did leave me asking the question regarding the existence of God in the Mass Effect universe. If you would like to read more on this, check out the last couple of paragraphs of the Plot section of this Wikipedia article. (Warning it contains more spoilers than this review.)

For me, Mass Effect 3 was the conclusion to a story that I had begun back in the fall of 2007 when the first Mass Effect game came out. While much of the content is certainly adult in nature, I can honestly say that I enjoyed the ride. While I certainly would not recommend Mass Effect 3 (or any of the Mass Effect games) for young children, I do believe it can be enjoyed by a certain audience. Whether you and your family is a part of that audience is up to you. I hope this review can assist you in making that decision.