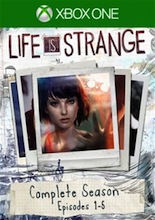 Following the recent trail of interactive storytelling blazed by creators like David Cage and Telltale Games, Life is Strange tells the story of a young teenage girl named Maxine Caulfield as she goes through her normal life at a private school. Well, almost normal. Aside from the whole, “Seeing a student shoot another student in the bathroom and rewinding time so she could stop it,” bit. Now, amidst all the drama and difficulty of high school, she has this strange new power, accompanied with equally strange visions of a tornado destroying her small, beachside town.

But make no mistake, despite the fantasy elements in the setup, Life is Strange is less about the strange and more about the life. The drama in the story mostly centers on people, relationships, and the difficulties of growing up. And thus far, it’s succeeding quite well at that.

The game is very reminiscent of an earnest indie film; it has the varied and quirky teenage characters, the soundtrack of little-known rock and folk bands, even the voice acting with enough mumblecore influence to fit, without getting annoying. The visuals help in that too, giving the equivalent of your average indie film’s, “low budget, but not low-quality” feel to the game. The artwork is stylized and looks great, aside from some inexplicably terrible lip-synching.

But trying to deliver a real look at high school life comes with all the problems high schoolers face, which means there’s plenty of mature content in this one. Let’s take a look.

Early on, Max sees a girl get shot in the bathroom; there’s some blood, but it’s not too graphic. When Max is threatened in one scene, a fistfight breaks out between two boys. In another scene, a girl is slapped by her father. There’s a lot of other potential violence, but none of it is shown (or technically happens, since you rewind time before it actually does). A girl can (depending on the player’s choices) jump to her death; the actual impact is not seen.

The F-word, S-word, and all manner of less offensive swear words are used throughout the game, along with uses of God’s name. Not constantly, but… well imagine semi-delinquent high schoolers, and you’ve got a decent idea. It won’t be anything a kid doesn’t already hear at school, but it’s still a decent amount of strong language.

There are some posters with sexualized images. A teenage girl is upset that another girl has been sexting her boyfriend, but finds out it was a ploy to cover the fact that he was cheating on her. There is a shower scene that is shot tastefully and shows no nudity. One major plot element, especially in the second episode, revolves around a viral video of a conservative Christian girl acting promiscuously at a party; the video itself is never shown (spoilers: she was actually drugged and doesn’t remember any of it).

Max’s time travel abilities are not explained thus far, so they could be spiritual, scientific, or who knows what else.

SPOILERS: One girl at the school is a conservative Christian, and much of Episode 2’s plot revolves around the fallout of a video released of her acting inappropriately at a party. Her family, for the most part, acts very poorly in response. This results in a suicide attempt that, depending on your choices and actions, can be stopped.

There are many positive things to be gained from the game so far (episode 2 has a powerful anti-bullying message), but many characters are also into less positive stuff. A major character smokes, and is caught with a joint in her room. Many of the characters are clearly sexually active.

Life is Strange is a very unique game, and it’s great to see developer Dontnod stretching their creative muscles; their previous game, Remember Me (which also has a review on this site), had a lot of potential, but felt as though it was constrained by the popular conventions of video games; this game is free from those expectations, and as a result it’s free to explore topics and themes that rarely get looked at in video games.

Similar to other games of this style, like Heavy Rain and The Walking Dead, the choices you make can influence the story in major ways. But unlike those games, which emphasize decision-making on the fly, Max’s time control allows you to see all the ways a situation can turn out, weigh the pros and cons, and make an informed decision; but what happens later down the line is entirely on you. It’s a powerful and uncommon way to explore choice in an interactive story.

And thus far, it’s worked very well. This game has, even in the first two of five episodes, explored themes of parental abuse, paranoia, bullying, standing up for what’s right even in the face of overwhelming opposition, friendship, peer pressure, and all sorts of other topics that are highly relevant to today’s world. A particular scene in the second season was one of the more powerful artistic experiences I’ve had from video games in recent years; it’s just a well-told story with interesting characters and important things to talk about, and I highly recommend it.

As for whether it’s appropriate for your child… this is an interesting one. There’s a lot of content that you may not think appropriate, but ultimately this is a fairly real-feeling representation of high school. There’s not much here that they won’t have seen in their everyday lives, and the way it explores many of the issues they likely face is, I think, pretty valuable. What content is here, is here to accurately represent and talk about these issues. So if you have a kid in high school, I think this game would actually be pretty great for them, but as always, you, the parent, can ultimately decide whether the content of this game is appropriate for them.