Legend of Zelda: Breath of the Wild, The

Legend of Zelda: Breath of the Wild, The 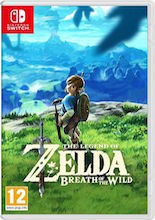 The Legend of Zelda is one of the most long-running and beloved video game series, and for good reason. Not only are the games consistently of high quality, it’s no overstatement to claim that the series has redefined the entire medium on at least two occasions; first with the original game’s creation of its fantasy adventure genre, and second with Ocarina of Time’s uncanny mastery of 3D graphics and controls when it was still largely uncharted territory. But the games, excellent though they are, have a certain formula, and Nintendo hoped to try something new with the series’ debut appearance on their new system, the Nintendo Switch.

Breath of the Wild is an open world game. Previous Zelda games had huge worlds to explore, but always with a progression, ways to keep the player going where they were supposed to, when they were supposed to. But in Breath of the Wild, it’s only a short introductory segment before the player is allowed to wander anywhere they want, anytime; even straight to the final boss, if they’re courageous and reckless enough.

This is a risky move, partially because it’s new territory for the series, and partially because open world games have slipped so comfortably into their own genre conventions that it’s hard to make one feel particularly new or innovative. So it was just a question of whether Nitnendo would pull off such a bold new direction for the Zelda franchise, or just bring it into tired open world cliches.

And we’ll get to that, but first let’s see if it’s something your kids can play.

Violence:
The player controls Link from a third-person perspective, and the gameplay includes a good deal of combat against a variety of fantasy creatures. Link can use a lot of weapons, from sticks to swords to bombs to hammers to bows and arrows. Combat is bloodless, and enemies disappear in puffs of smoke.

Some of the game’s bosses are made of dark magical energy, and spew it all over the place after you defeat them. There’s no blood, but it does look kind of graphic anyway.

Language:
This is the first Zelda game to include spoken dialogue at some points, but there is no offensive language.

Sexual Content:
At one point, Link must infiltrate a society of Gerudo, a race of tall, muscular women who do not allow men into their village; some comments are made by male characters suggesting how jealous they are that Link was able to go there.

Some characters, most notably the fairies that magically upgrade Link’s clothing, are of rather exaggerated proportions and show cleavage. The aforementioned upgrades are accomplished through various displays of affection, from blowing Link a kiss to some very enthusiastic hugs.

Some optional content includes mildly suggestive language, such as a diary entry from a woman who has a thing for archery and wishes someone would come “nock an arrow for me. It’s been WAAAAAY too long.”

Spirituality:
Legend of Zelda is a fantasy series, so magical creatures and ancient powers are a given. Link’s opponent, Calamity Ganon, is represented by dark energy swirling around Hyrule Castle. The player finds shrines littered around the landscape, and upon finding them overcomes trials left by ancient Hylians to reward him with a “Spirit Orb,” which can be used at certain statues to improve Link’s health and stamina. Link is given his quest from the spirit of Hyrule’s king, and gains some magical abilities from the spirits of long-dead heroes. The backstory, unlocked through finding and viewing memories from a century before, center around Princess Zelda trying to awaken to a power that can save Hyrule.

Misc:
Occasionally the player can encounter a drunk character.

A Child’s Perspective: My nephew didn’t have long to play, but as a fan of the Zelda series he was in awe of the game’s scale and would have enjoyed it a lot had he gotten more of a chance to play.

Reviewers Thoughts:
I know I’m far from the first person to say this, but Breath of the Wild is a revelation.

It’s hard to go into exactly what makes the game so great without making this review far longer than it should be. It’s just so expansive, so large in scale and ambition, and so full of interesting things to do and discover. At no point in Breath of the Wild did I feel like my time or exploration was wasted; there’s always something exciting to do, something helpful to find, or something beautiful to see.

The spirit of The Legend of Zelda is alive and well, but channeled into a package that prioritizes the player’s own actions over the game’s structure. The puzzles are fun, the world is gorgeous, and once you start playing this game it’s incredibly difficult to stop because there is always something more to discover, explore, and overcome.

What’s more, inkeeping with the series’ general tendencies, Breath of the Wild is quite kid-friendly. Mild violence, fairy-tale fantasy elements, and a few mildly suggestive moments aren’t enough to ruin this for your child, and they’re all but guaranteed to enjoy the adventures they make in this sprawling world.