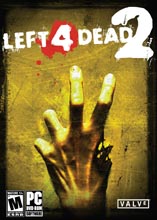 The premise of Left 4 Dead 2 is simple. A pandemic has occurred in which a virus has turned almost everyone into flesh eating zombies. There are a few humans, however, and four of them play out as the main characters of this game in which they are trying to stay alive through the hordes and sometimes seemingly endless amount of zombies. These humans are able to use a large number of weapons which include a grenade launcher, combat shotgun, sniper rifle as well as a magnum and regular .45 caliber pistols. On top of all the ballistics, there are also a large number of melee weapons, including axes, chain-saws and baseball bats. The object of the game is for the players to use these weapons to kill as many zombies as they can as they try to reach extraction points to remain safe from the virus, and more importantly safe from the zombies.

Now the story itself is really not that interesting, but there are two things that really make Left 4 Dead 2 unique as a game. First is the proprietary Source engine that was used to create the game. Valve has created a game engine in which the more you play, the more the enemy AI learns how you play and thus the game can adjust its difficulty as the players progress. In turn this makes for a very challenging game the more you progress through the story.

The second thing that is unique about Left 4 Dead 2 is that the game requires cooperative gameplay 100% of the time. Even if you play the game alone, there are three other computer controlled players that assist you as you progress throughout the story. This is not an adventure to be tackled alone as zombies and other creatures fly at you from every direction, and more often than not something is attacking you without your knowledge. You and your teammates have to watch each other’s backs to protect and assist each other as you fight through hordes of the undead.

Nothing else exists in this game. It is all violence. Bullets through heads, limbs falling off, decapitations, spilling guts, and of course, being eaten by a zombie… It is ALL very violent, and there is A LOT of blood. As with many zombie movies, the blood is a little over the top and not very realistic, but if the sight of blood makes you uncomfortable then you will probably not enjoy this game.

Bad language does occur in Left 4 Dead 2 including the use of the F-word, S-word and the name of God in vain among others.

There is really no time for sexual content when you are killing zombies… however, one of the four playable characters has a tattoo of a woman dressed in sexy attire.

There is not any spiritual content actually spoken. On the walls, however, you will sometimes run into writing that suggests this is punishment from God for our sins or writing that says “God is Dead.”

I am not much for mindless killing when it comes to the games I enjoy playing. A game like Left 4 Dead 2, for me gets very boring fast. Eventually when it got really difficult towards the end of the game, I did not want to play it at all. The story was not enough to keep me interested. I would love, however, to see the “Source engine” used in a game that had a little more meat to it.