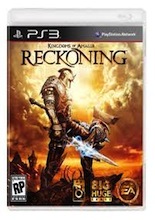 Kingdoms of Amalur: Reckoning, is a 3rd-person action RPG that takes place in the world of Amalur, where the denizens of the world are bound by fate, an indiscriminate force that dictates what people will and will not accomplish in their life. Humans, gnomes, and immortal elven people known as “Fae” make up the populace of the world, but all is not well. A clan of the Fae known as “The Tuatha” have broken free from the bonds of fate and are slaughtering all the world for the sake of their god, Tirnoch.

The player is thrust into the world when the character they control dies, but is resurrected using a combination of magic and science. But rather than being bound by fate, the character is free to make any choice that he or she wishes. With no memory of his/her previous life, the player is forced into the world to discover his/her identity while also defeating the Tuatha. The player accomplishes this by completing main and side quest missions that flesh out the characters of the world and move the story along.

The world of Kingdoms of Amalur is beautiful to look at. The sights are simply epic. From wide open plains, to dark forests and dismal wastelands, Kingdoms of Amalur really sets the tone for an immersing experience for the player. As the player gets into the world, being that he/she has no fate, a wide range of character classes are open to the player to choose from. From warriors who specialize in brute force, rogues who specialize in stealth, and mages who specialize in magic, the player can choose one class or be a hybrid of any of the three, thus increasing the plethora of options in the game. Also, as the player defeats enemies and gains experience, they will level up and be given the opportunity to increases the stats in specific areas of gameplay, such as strength or defense.

Kingdoms of Amalur’s main gameplay relys on heavy use of violence. Specifically, the violence follows a medieval style with players taking hold of swords, hammers, knives, chakrams (boomerang-like discs), staves, and sceptres. The player can either blugeon their enemies, cut them, or fire magic spells such as lightning, ice, and fire. As enemies are defeated, typically blood will issue forth from their bodies, depending on the gameplay style of the player. Also, certain weapons can inflict “bleeding damage,” which will cause the enemy to bleed for an extended period of time. During some sequences, the player can trigger a quick-time event that requires the player to hit specific buttons at certain times which will depict more gruesome violence. Examples of which include breaking an enemy’s neck, lifting the enemy onto a spear, and or running the enemy through with a sword.

Finally, later on in the game, the player will come across a swamp that has the “Gallows Tree,” which has lifeless bodies hanging from it.

There is not a great deal of language in the game, but there are instances of the words damn, bastard, and ass strewn throughout the game at various times. Other than those words, no other adverse language presented itself during this reviewer’s playthrough of the game.

Kingdoms of Amalur actually contains a fair amount of spiritual content of note. Here is a list of specific items:

I did thoroughly enjoy my playthrough of this game, though there is so much side quest content that it felt difficult to come across all adverse content that may be in the game. I found the gameplay to be very engaging to start, but I must admit that it became repetitive as the game progressed. The best aspects of Kingdoms of Amalur had to be the music and the environments that where created for the game. The musical score highlights the mood for each situation quite well and there were multiple times when I stopped and panned the camera in a 360 degree motion just to take in the full view. I would recommend this game, despite its repetitive nature, but would advise taking the aforementioned content into account when deciding if this game fits into your family’s entertainment guidelines.