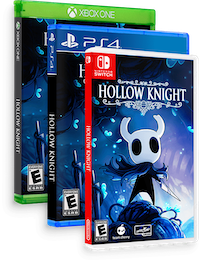 Game Description:
Hollow Knight opens with a small bug coming upon the village of Dirtmouth. Dry and sparsely inhabited, Dirtmouth only attracts visitors because of what lies below it; the ancient ruins of Hallownest, a civilization long past, with secrets and treasures that an intrepid adventurer could claim for themselves. If they survive.

Whatever the reason for this bug’s visit, it journeys down the old well into the caverns below, to uncover the secrets of this ancient civilization. Along the way it will encounter ancient secrets and terrible monsters, and learn how the ambition of an ancient empire led to its collapse.

Hollow Knight is a side-scrolling action game in which the player explores a vast system of caves, using a sword (here called a nail) to defend themselves from all manner of creature in the process. More specifically, the genre this game belongs to is called Metroidvania, named after the Metroid and Castlevania series; this denotes a game where the player explores a large area, and more areas become available as the player gains more abilities that let them reach previously inaccessible locations. This game in particular is known for its difficulty, but that’s hardly all it has to offer.

So let’s take a look at Hollow Knight, and see if it has anything to offer you or your kids.

Sexual Content:
One area of the ancient city is called the “Pleasure House.” This area contains a hot spring, and the ghost of a bug who once sang to entertain visitors.

Spirituality:
The ancient city of Hollow Knight has a number of magical elements. When the player dies, their spirit is left behind, and must be found and defeated to regain the resources the player had on hand when they died. The little bug also learns to use magical attacks. They can also use a “dream nail” to read minds and enter the dreams of long-dead bugs and face them in battle.

The plot features a few magical elements as well. Hallownest lives on, to the extent it does, only because of a knight who gave their body as a vessel to hold the power of the kingdom, guarded by the spirits of three elders. The player explores an ancient library where scholars once studied the arcane arts.

Positive Elements:
The game rewards the player for helping its various characters. The story also emphasizes the importance of understanding history, and knowing fully what you’re doing before diving into something. It’s a story of sacrifice and tragedy, where acting carefully in good faith brings more good to the world, even if at the expense of yourself.

Reviewers Thoughts:
A lot of video games now get compared to the Dark Souls games. Specifically, any game with punishing difficulty tends to earn this comparison, but few games truly share the spirit of those modern classics. Hollow Knight does.

The ancient kingdom you explore feels… well, ancient. At no point does anyone sit you down and explain what happened to it; you piece it together from the enemies you defeat, the ghosts you encounter, the statues and graves you come across. The world feels long dead, but somehow as alive as it’s ever been. It’s dark, and threatening, but occasionally beautiful, and surely long ago it was even more so.

In this, Hollow Knight succeeds on pretty much every front. It’s a compelling journey through an enthralling world. It plays smoothly and contains a surprising amount of content for players curious enough to truly explore every corner of Hallownest.

If you or your child enjoy the side-scrolling Metroid or Castlevania games, or the Dark Souls series, you’ll probably enjoy this game a good deal. And if you’ve never played any of those but would be interested in an atmospheric game about exploring an ancient ruin and uncovering the secrets of its demise–and dying a good few times–this is definitely worth checking out.

As for kids, it might not be the best choice for young players, but the objectionable content is mild enough that most kids old enough to appreciate the game can probably handle its content.