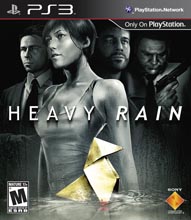 (WARNING: This review contains spoilers.)
How far would you go to save someone you love? That is the question behind the game Heavy Rain. Fans of television shows such as Criminal Minds will probably really enjoy the story behind this game, but let me say up front, Heavy Rain is not a kids game. Throughout this adventure, the player will take control of four different characters as they try to solve the mystery of the Origami Killer, a serial killer who kidnaps young boys and then leaves their bodies to be discovered a few days later with only a white orchid and an origami animal.

In trying to solve this mystery the player will take control of four different characters; the father of the origami killers latest victim, a private investigator, an FBI agent and a journalist. Each character plays a pivotal role in solving the mystery and hopefully rescuing the killer’s latest victim before time runs out. I do not want to say more than that so as not to give away too many spoilers, but I will say that your decisions do matter. In some ways, the game plays out like a Choose Your Own Adventure book and with seven different possible endings; the player must carefully weigh out each decision.

Heavy Rain is played from a third person point of view. While Heavy Rain is not a run and gun shooter like a game such as Call of Duty, there are certain parts of the game that would be considered violent. For example, on more than one occasion the player will be faced with the choice of killing someone or letting them live. Whatever the player chooses will affect how the rest of the story goes.

There are also times when the player will get into a scuffle with another character. When this happens certain button segments will appear on the screen that the player must press in the correct order to be successful, otherwise the character might get beat up or worst, even killed. One of the interesting things about Heavy Rain is that since there are four playable characters, if one of the characters dies, the story continues with the other three and the story is then affected by that character’s death.

There are also some other violent scenes in the game. For example, there is a dream sequence in which a characters throat is slit. There is another scene where a character encounters a woman who has slit her wrists and must try to save her.

There is a lot of bad language in Heavy Rain including frequent use of the words F**k, S**t and the use of the name of God in vain.

There is a scene of a man taking a shower in which you can see his butt.

There is a different scene with a woman taking a shower in which you can see her butt and breasts.

There is a scene where a man and woman start kissing and then begin to undress. The woman’s breasts are revealed and then you are led to believe they had sex.

There is a scene where a woman has to dance seductively revealing her bra and panties.

There is a scene while playing as the FBI agent where you are questioning a potential suspect. The suspect’s apartment is filled with crosses. He is a bit of a religious nutcase and starts spouting off weird things about God and how one cop is the agent of the antichrist.

There is a scene where the father of the kidnapped victim starts to blackout and sees a vision of his other son who had died from being hit by a car. One article I read about the game said that this was the ghost of the boy, but I personally did not get that impression from playing the game. It seemed to me more like a dream sequence.

One of the characters struggles with a drug addiction.

You can encounter toilets in the game in which you can make your character go to the bathroom. You do not see it, but you hear it.

One problem I had while playing the game is that the game frequently froze up on me in the middle of gameplay. When I got to the point of the story where I finally figured out who the Origami Killer was, the game continued to freeze up on me no matter how many times I rebooted my PS3. I have heard that other people have had similar problems with their game freezing up on them also.

I thought Heavy Rain told a very emotional story that kept me on the edge of my seat for most of the experience. In fact, Heavy Rain got to my emotions so much that twice while in the process of reviewing the game I dreamt at night about the story but on a more personal level. My two biggest complaints against the game, however, were first that it constantly froze up on me. Second, I thought the nudity was pointless. It felt like the game developers just threw it in there because they could, but it served no real purpose for advancing the story. Aside from that I thought Heavy Rain told a great story. For adults who are fans of psychological crime dramas, Heavy Rain could be a very enjoyable experience. Because of the bad language, nudity and content involving a serial killer who murders young boys, however, I would not recommend Heavy Rain for children.