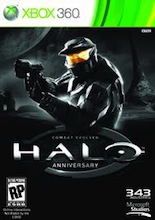 Ten years ago, Bungie released one of the most important video games ever made: Halo. This game changed the way shooters worked on consoles by popularizing dual-stick control, introducing regenerating shields, creating the concept of the two-weapon limit, and generally being an incredible, well-designed game that ushered in the next generation and single-handedly kept the Xbox popular in its early years.

Now, one decade later to the day and after Bungie left the series in the good hands of 343 Industries (made specifically to continue Halo’s legacy), Halo: Anniversary aims to remake the original game with a visual upgrade that makes it look like it was made today (as well as the ability to see what it used to look like with the press of a button). And for the most part, it succeeds brilliantly.

Halo starts in the 26th century, in the middle of a larger conflict; a war between the humans and a coalition of technologically superior aliens known as the Covenant. The Covenant is rather thoroughly destroying the human opposition, and no battle makes that so clear as Reach (the events of which are covered in a previous review), in which the Covenant brought down the second-most-populous human planet (next to Earth) in a matter of days. Making a blind and desperate escape from the carnage, the Pillar of Autumn makes a blind subspace jump and comes out in front of a giant ring floating in space. The inside of the ring has an atmosphere, Earth-like vegetation, and even weather cycles, but the ring itself appears to be mechanical. And the Covenant is already there. When forced to crash-land on the ring, the Master Chief (the last surviving Spartan supersoldier) must take Cortana, the ships onboard AI, and attempt to discover the secrets of this beautiful and mysterious structure and why the Covenant is after it as well.

Halo: Anniversary adds a complete graphical overhaul (as well as 3D compatibility) without changing any of the fundamentals of the gameplay. The only additions made to the campaign are an optional remastered soundtrack, the addition of skulls (which can be found in obscure locations in the campaign and activated for bonuses and added challenges), and some hidden terminals that, when accessed, play new videos giving insight into the past of the ring and its caretaker. On the multiplayer front, Anniversary delivers six classic maps from the first game to play in Halo: Reach’s multiplayer; these maps can be played both from Anniversary itself and downloaded to Reach to play with the rest of the maps.

One nice thing about the graphical upgrade is that now the game is a bit more easily accessible for younger players that have been spoiled by the highly detailed graphics of today’s gaming world. But should younger players be playing Halo in the first place?

Being a first-person shooter (that is, a game seen from the perspective of the protagonist and centered around combat with various guns), Halo has its share of violence. Most of it is relatively mild; the Covenant’s blood splatters on the floor and walls, but each race has blood that ranges from blue to orange in color, so it’s not particularly disturbing. The same effect happens when human characters (such as yourself or any of the marines helping you out in some levels) get hit, but neither humans nor Covenant can be dismembered or anything like that.

Where the game takes a turn for the disturbing is in a level about halfway through the game, in which the Master Chief first encounters The Flood. It is revealed that Halo was created thousands of years ago by the Forerunner in order to contain this parasite, which kills organic life forms, nestles inside them, and uses their bodies both as food and a vessel for transportation and combat. Due to the nature of the Flood, new enemies faced at this point include both human and covenant bodies being used by the Flood; the result is grotesque caricatures of the original host. Tentacles come out of arms, the bodies are bloated and green, and thanks to Anniversary’s updated graphics, you can see the mold of faces in these deformed messes of previous life. While it’s hardly the most gruesome thing to be in a video game, these creatures are quite grotesque, and unlike the Covenant and humans, their arms can be shot off; the result is relatively mild, especially considering it doesn’t really make them look any more gross than they already do. I feel it should be emphasized that these enemies are no longer alive, but simply bodies being controlled by the parasite.

Cortana, the AI traveling with Master Chief, has a holographic form of a shapely woman whose entire form is covered in binary code. She is not sexualized in any way.

The Covenant is determined to wipe out humanity for misguided religious reasons, but those are not explored or even really mentioned until the second game.

It should perhaps be noted that the level in which the player first encounters the Flood is renown for its effectiveness at scaring the player. While hardly on the level of horror game scares, the level leads up to the reveal of the flood with things such as a hallway splattered in Covenant blood, a crazed marine shooting at you and babbling incoherently, and a dead marine falling from a suddenly-opened door. It’s impressively effective, and not for easily scared players.

Over the last ten years, I have known plenty of kids that have loved Halo. Especially in the original Xbox version, before the Flood was rendered in HD, Halo is one of the most mild M-rated shooters out there, which, along with its intriguing story and simple but solid gameplay, makes it a good choice as a first shooter for a maturing child.

I’m just going to make this claim; Halo is one of the greatest shooters ever made. It was back then, and it still is today. The mechanics are simple, especially in comparison with many more modern shooters, but they are also solid and enjoyable, and the story, world, and atmosphere carry the game no less than the actual gameplay. The Halo series as a whole also has some of the most fitting, beautiful, and exciting music ever written for a video game. None of these things have changed in the transition to HD, and the ability to press a single button and switch between the old graphics and the new makes for a lot of jaw-dropping moments when you realize how much better it all looks.

Some mild disappointments with the porting show up. Some objects were made to look smaller, for instance, but the actual hit boxes weren’t changed, so you can sometimes run into something it looks like you’re next to. The opposite is sometimes true as well, making some objects look bigger, but you can just walk through them. The animations also look the same, so while everything looks far better, feet still slip on floors a bit and the dying animations look dated. And the tank still controls pretty badly. But really, these are small complaints that we got past ten years ago, and can just as easily be overlooked now.

As for whether Halo: Anniversary is appropriate for children, I certainly wouldn’t say to let your children loose on it. I will say, however, that even with the Flood’s more detailed design, Halo is about as mild as you can get in an M-rated game. Beyond that, it’s a far more interesting game from an artistic perspective than most shooters out there, which is a nice change of pace from constantly playing Call of Duty online. Halo is as good a shooter as you can get if you want to let your child start playing this genre; it’s simple enough not to be confusing, good enough aesthetically as to provide value beyond simple entertainment, and more mild in its content than most shooters on the market. So you decide when your child is ready to play shooters, but when they are, I highly recommend this one.