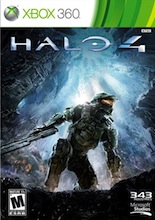 Halo 4 is actually the 6th installment in the Halo franchise and is the first Halo game with its new developer, 343 Industries. However, unlike the past two titles, (Halo ODST and Halo Reach) Halo 4 is a direct sequel to Halo 3. In this particular game, Master Chief, the series primary protagonist, and his female digital counterpart, Cortana are found floating along in space by a group of aggressive aliens known as the Covenant. Since peace had been forged with the Covenant, confusion sets in and Master Chief and Cortana investigate the invasion. From there, the action escalates to a fever pitch, where Master Chief and Cortana must fend off a new threat to the galaxy.

Graphically, Halo 4 is the prettiest Halo game to date. The outdoor sceneries are lush and vibrant, and the indoor sequences contain sci-fi architecture that feels artificial and alive at the same time. The alien Covenant, along with a new race of aliens known as the Prometheans, each have their own unique behavior and carry a life of their own. Other than that, this game is traditional Halo, through and through. Every weapon has a distinct feel that can only be described as, “Yep, its Halo” and there is nothing wrong with this.

Halo 4 also comes with many different ways to play and interact. The game comes with an approximately 10 hour campaign that can be played through alone or cooperatively with a friend on the same screen or with a friend elsewhere via Xbox Live. Halo 4 also comes with a robust multiplayer that allows users to engage in free-for-all battles, team battles, or objective based game types. The game employs an XP system for improving in rank, which also unlocks new weapons and abilities for multiplayer, as well as aesthetic improvements to one’s Spartan avatar. Finally, Halo 4 includes a mode known as Forge, which allows users to use the maps in the game and create their own custom maps for an even greater variety of gameplay.

If you are reading this and have any experience with first person shooters, then Halo 4 will present few surprises. For those new to this gametype, a few things can be expected while playing…

– The violence in the game is found in the form of firing a gun at enemies. The types of guns vary, but the overall objective is the same. Find the enemy and shoot and they expire. Players will use all types of weapons, including pistols, rifles, sniper rifles, rocket launchers, grenades, swords, and the occasional hammer. When enemies die, there generally will be an issuance of blood or other form of vital fluids. With certain weapons, the enemy will be vaporized.

– There are instances when players will sneak up on an enemy and engage what is known as an “assassination.” During an assassination, the camera will revert to 3rd person and the player will watch as his character pulls a knife and kills the enemy in a more savage fashion than a simple gunshot.

There are some instances of coarse language, which pertain to instances of d–m, a–, and b—h. However, other than that, there isn’t significant language issues in Halo 4.

There is no overt sexual content in Halo 4. However, that being said, in my opinion, Cortana’s figure takes the form of essentially a nude woman, lacking defining features in only her groin region and breasts. Though nothing is ever made of this sexually in the game, it is difficult not to notice.

There is no overt spiritual content in the game.

I have been a fan of the Halo franchise since its original inception, and I must say I was somewhat skeptical when its original developer, Bungie, passed the reigns to a new studio. Thankfully, I can report that 343 Industries has created a game that is definitely “Halo,” and has satisfied my desire for a new game in this series. Though they didn’t take any significant risks with new features in Halo 4, every aspect of the game is clean, polished, and feels exactly as a Halo game should. The thing that tips the scales firmly in Halo 4’s favor for me is its exquisite music. Neil Davidge’s score for Halo 4 is by far the best Halo soundtrack to date, and is perhaps one of the best soundtracks available today, movie, video game or otherwise. I would definitely recommend Halo 4. However, as its content is geared more towards an adult audience, careful consideration should be taken as to whether this title is appropriate for your child.