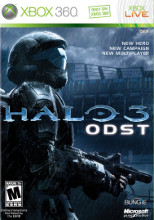 “The year is 2551. Humanity is at war with an alien alliance known as ‘The Covenant.’ We are losing. The Covenant have burned our worlds, killing billions in their genocidal campaign. Earth is our last bastion – a carefully guarded secret; but not anymore. A Covenant carrier has breached Earth’s defenses and attacked the African mega-city, ‘New Mombasa.’ Initial reports confirm major damage and heavy civilian casualties. Now, military leaders of the “United Nations Space Command” (UNSC) have prepared their response. Teams of highly-trained “Orbital Drop Shock Troopers” (ODST) are ready to assault the carrier from navy ships in low orbit. This is a near-suicidal mission. But these troopers are the best of the best. And saving New Mombasa could be the most important mission of the war…”

Thus begins a Halo game that… well, is a lot different from the Halo we know. In the Halo trilogy, the gamer played as Master Chief, a genetically enhanced super-soldier tasked with saving humanity from the Covenant, as well as discovering information about strange orbital ring worlds and a parasitic life-form known as The Flood. But Halo 3: ODST is different. You play as an ODST known only as “The Rookie” (though despite the single protagonist, you can still play through the story with up to three friends). When dropping down to assault the Covenant carrier, it suddenly jumps into subspace, creating a blast that largely destroys the city and throws all the pods off course. Now, separated from your team, alone in the dark desolate streets of New Mombasa, you travel around the city avoiding and fighting Covenant patrols while tracing the steps of your squad mates in an attempt to find them.

Halo ODST makes for a very different game than the “run and gun” gameplay of the Halo trilogy. New Mombasa is a large and desolate place that you can explore freely, where all the buildings are empty and the only sound you hear are the Covenant cruisers overhead and the frequent car alarm: you rarely come into contact with enemies, making these sequences much more moody and contemplative than Halo fans are used to from the series. And when you do run into a Covenant patrol, you have to play it safe: you are much more fragile than Master Chief. This approach requires that you use strategy with every encounter, as most of your enemies can take more damage than you can, so you usually either want to sneak around the Covenant patrols or find a way to take them out quickly and easily.

As you wander through the streets of this once-busy city, you will find various objects connected to other members of your squad. When you find one of these items, the player gets to play through the experiences of other various members of the squad. This makes an interesting (but not amazing) story much more fascinating, since you are working the story from many different angles. Playing as the other squad mates delivers much more action-packed experiences, including some of the great vehicle sequences for which Halo is known. Though even in the heat of battle, you die a lot faster than in the other Halo games, so everything must be planned carefully. In your journey, you will also find audio diaries (a popular trend in games lately) detailing the journey of a young woman attempting to go to her dad in the middle of the city during the Covenant invasion. These give more insight into the story and are quite interesting to find and listen to.

The new ideas and additions to the Halo formula make for the most original (and arguably the best) Halo campaign yet, and the addition of Firefight (fighting alone or with friends against ever-increasing waves of Covenant) is great for playing with friends. But, like the other games in the series, it may not be appropriate for kids.

Like the other Halo games, ODST is played from a first-person perspective. Using various types of weapons, you fight your way through hordes of Covenant. Most of your weapons are guns: sniper rifles, pistols, shotguns, rocket launchers, plasma-based alien weapons, and more. You also have a few different kinds of grenades: normal frag grenades, grenades that stick to enemies they hit, and a napalm grenade that sets fire to whatever it touches. Sometimes you can control vehicles such as a tank, a jeep with a machine gun on the back, an alien hovercraft, and a Covenant Banshee (a flying vehicle that is the aliens’ answer to the fighter plane). There is also a gravity hammer that sends foes flying with a powerful blow.

All of these weapons cause death and destruction on some level, but there is minimal blood. Whenever you shoot an enemy, a small amount of strangely colored alien blood splatters onto the ground (or a nearby wall). Sometimes this makes for a good amount of blood on the ground, if an enemy is hard to kill or many enemies are killed in the same place. Explosives can also send soldiers flying long distances (especially if you have an option turned on that makes the physics unrealistically high). Vehicles explode and both Covenant and humans die. Covenant Brutes sometimes taunt you by claiming they will eat you or tear you limb from limb.

Words like “damn” and “ass” are used to a decent extent: some of it is in the in-game dialogue, so the exact amount of swearing will vary. It is not excessive, but it is definitely present. The phrase “son of a bitch” also appears a couple times,

A history is implied between a trooper and a female commander. They talk about it a bit, and at one point mention something about “that night” and “what you asked me in the morning.” When another ODST notices the aforementioned commander’s different armor, he asks what kind of armor it was, to which another trooper replies jokingly “I don’t know, I wasn’t looking at her gear.”

In an audio diary with limited, static-plagued, and laggy video, it is mildly implied that a man intends to rape the woman whom the diaries follow (his plan is foiled). Nothing is said outright, and the video is basically a laggy slideshow: nothing is seen.

The Covenant’s religion was never fully detailed, and its presence in this game is minimal. Enemies will sometimes call you a heretic or make vague references to their religion, but that is it.

On a positive note, dedication and commitment are displayed by all the members of the ODST squad. Also, when a new kind of Covenant shows up with no obvious purpose and no murderous intent, the player is encouraged not to kill it: there is good reason for this later in the game.

Halo 3: ODST comes with a second disc bearing the competitive multiplayer from Halo 3 (the disc is named Halo 3: Mythic). As with Halo 3, the multiplayer has no dialogue, reducing the negative content to only the violence (The game cannot, however, control the language of other people when playing over the internet).

On the positive side, I am a big fan of the Halo world and story, so when another Halo game comes out, I know I am going to buy it. I have to admit, I was not sure about this one, considering it was originally planned as a simple expansion, a small addition to the story of Halo 3. But it was definitely worth it. The campaign is one of the best of all the Halo games in my opinion. Also, Firefight is a welcome addition to the mix as well: it is a blast to team up with friends and see how long you can survive against increasingly-difficult hordes of Covenant. And getting the entirety of Halo 3’s great multiplayer is the cherry on top. This is definitely a worthwhile package for Halo fans: or even just shooter fans, for that matter. The story could even stand alone: one could actually understand it well enough without having played the other Halo games.

On the negative side, Halo 3: ODST is a game that focuses on violence. To be fair, the Halo series has always been on the lower side of the blood and gore spectrum and this one is no exception, but the focus of the game is still to kill the enemy. Please take the M rating into consideration and know what you want to allow your child to play before getting this game.