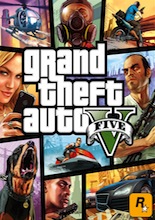 Grand Theft Auto has been controversial for as long as it has been around. Early on, the series became known for its violence, sexual content, and an apparent lack of morals (as well as huge, explorable worlds). One of the biggest scandals in video game history came from a previous Grand Theft Auto, where players could find a hidden mission that let them have interactive sex (the game’s rating was later changed to AO, and versions of the game containing the mission were recalled). GTA V, however, promised players much more than interactive sex. Rockstar promised them a gigantic, living world to play in and enjoy.

Shortly after the game’s release, media brought attention to an interactive torture scene within the game. The world of Grand Theft Auto is vast, and awesome to explore, but there are quite a few things parents should know before making any decision about the game.

Please note: The world of GTA V is ever growing, with new content being released all the time. Content may be released after this review, and may have more adult content in it. Also, online mode allows real life, unknown players to communicate with each other, so online experiences will vary.

Grand Theft Auto uses realistic graphics, and is set in a third-person perspective. Players may wield all sorts of weapons, including Assault Rifles, Machine Guns, Rocket Launchers, and other explosives. Pretty much any living thing can be killed, including innocent civilians, unarmed (and armed) members of the police and military, and animals.

There are a series of missions that involve assassinating people, “because they are bad,” and because killing them would raise a certain stock price. One man is pushed of a cliff, and drowned.

Blood may squirt out of the player when hit with a bullet. When shooting someone, blood will come out of them in a spray. Blood, cuts, bullet wounds, and other injuries will be seen throughout the entire game. A few people meet more gruesome deaths, by falling into a large meat grinder, a vat of acid, and a woman getting sucked into a jet engine.

The most controversial scene in the game involves intense torture. A tooth will be ripped out with pliers, knees, the crotch, or the head can be hit with a large socket wrench, the man may be water boarded (virtually drowning someone), and he can be electrocuted from a car battery. The man being tortured will eventually pass out, and an adrenaline shot will be pumped into his heart, in order for him to regain consciousness. The torture mission is mandatory, and will need to be played before the game can continue.

A body is dug up from a grave, and shown in its decomposing form.

Out of all the games I have reviewed for this website, Grand Theft Auto had the most adult language, by far. The previous record for the times F*** was used in a game was 40. In GTA, there was almost (I kid you not), that many within the first mission. I actually couldn’t keep up with the amount of language used, because I would have to pause the game every few seconds. In the maybe 18-20 hours I played GTA V, I probably heard F*** over 1000 times. Every other cuss word is used in excess at well. Even racial slurs, slang, and adult language from other countries were used.

Bare butts and breasts can be viewed throughout the game. Players have the ability to go to a strip club (one of the protagonists even gains ownership of it), and stare at pole dancers. They may also pay for a private session, where two topless women will dance around the player. Prostitutes may be hired to perform oral, and normal sex (though genitals are never shown). At one point, a protagonist’s daughter dances dirty on TV with a TV host (if you saw Miley Cyrus and Robin Thicke, picture that), and later the host asks for a “blow job” from the daughter. It is unknown whether the daughter is underage or not (I believe she is either 16 or 18). A penis is tattooed onto a man’s chest or back, and a dildo may be thrown at the player.

There is a lot of sexual talk as well, whether it’s from profanity, or describing some sexual activity. One of the protagonist’s son’s dialogue is almost completely sexual slurs.

Cheating is rampant in GTA V. For instance, the main family in the game has a deal which pretty much states “you can cheat, just don’t do it in the house,” although the wife breaks that rule. There is even an in-game website devoted to people cheating on others. The wife has an account on that site.

In one of the missions, one of the characters yells at the other “in a few hours, we will both be rotting in Hell. And I am going to enjoy torturing you for the rest of eternity!”

Players may steal vehicles anytime they wish, including boats, airplanes, buses, and cars. They may rob small stores at gunpoint.

One of the main selling points of the game was the heists. In heists, players plan out how they are going to do a robbery, then gather the materials required, before finally pulling off the heist. Places robbed include a jewelry store, a bank, an FBI building (stealing information, and ends with a lot FBI agents dead), a cargo ship (to steal a mega-bomb), a laboratory (to steal a bioweapon for the FBI), and finally the Union Depository (four tons of gold).

Missions have players destroying property for fun or money. The entire police, law enforcement, homeland security, and military forces are corrupt in one way or another. There are multiple acts of terrorism, including exploding a CEO’s head via cellphone during a live TV event. There are multiple instances of kidnapping, and stalkers. Through the game, one of the characters may pick up helpless people from the side of the road. If they wish, they may drive these people up a mountain, and sell them to cannibals for money.

Players may go to a bar, and have as much alcohol as they want. This will turn the screen blurry, and movement will be difficult. Cocaine and Pot are shown throughout the game, and players can get high on pot during specific missions. There is at least one instance of underage drinking.

A Child’s Perspective: I did not let any children play the game with me, as it is rated M. My dad didn’t even want my 16 year old brother watching me play.

I have very mixed feelings about this game. On one hand, there is an apparent lack of any form of morals. On the other hand, the gigantic, sandbox world is very well built, and fun to explore. I often come across something that makes me laugh (like when I hit an indestructible object while my car was going full speed, sending my character flying down two city blocks at supersonic speed).

From a story and humor standpoint, the game falls a little flat. Most of the jokes are supposed to be funny because of the subject matter, and don’t actually explore why the subject matter itself is funny. GTA also has this weird neutral standpoint on all subjects. It’s like the game is encouraging and tearing down all controversial subjects at once. For instance, there is a TV show about a Liberal superhero (Impotent Rage), and his arch nemesis, a supervillain Republican. But the show is so over the top, you would think that it was parody, except it isn’t really portrayed as such.

I did find one thing really interesting about all the characters: they have their own set of what is wrong and what isn’t. Now, that’s pretty normal in a story, but GTA is about those who do bad things all the time. In other words, almost everyone is morally deprived. For instance, Trevor, the homicidal, murdering, torturing, drug and weapon dealing, psycho, absolutely can’t stand to see women treated wrong. He beats up a guy who is dirty dancing with a young girl (previously mentioned in the Sexual Content section), and is tormented when he realizes that he hasn’t called his mother (who is in prison), for years. He even kidnaps a mafia boss’ wife, because the man is abusing her. They have identifiable moral codes, even if none of them are good.

This is a game I would never play with a child in the house. It has a lot of adult content, and the developers simply didn’t have kids in mind when they were creating the game.